In this study, the performance of an islanded gas turbine power generation system in Malaysia was investigated. Considering the low fuel efficiency of the plant during peak and part-load operations, an economic analysis was also carried out, over the period of one year (2017). The case study was conducted on the isolated electrical network of the Universiti Teknologi PETRONAS (UTP), which consists of two gas turbine units with a total capacity of 8.4 MW. Simple performance indicators were developed to assess the performance, which can also be applied to other power stations in Malaysia and elsewhere. Meanwhile, the economy of variable load operations was analyzed using the statistical data of generation, fuel consumption, and loads. The study reveals that the capacity factor of the microgrid in the period was between 52.77–63.32%, as compared to the industrial best practice of 80%. The average plant use factor for the period under review was 75.04%, with a minimum of 70.93% and a maximum of 78.61%. The load factor of the microgrid ranged from 56.68–65.47%, as compared to the international best practice of 80%, while the utilization factor was between 44.22–67.655%. This study further reveals that high fuel consumption rates, due to the peak and part-load operations, resulted in a revenue loss of approximately 17,379.793 USD per year. Based on the present performance of the microgrid, suggestions are made for the improvement of the overall performance and profitability of the system. This work can be valuable for microgrid utility research to identify the most economical operating conditions.
Keywords: gas-fueled-microgrid; peak load; gas turbine gas-fueled-microgrid; peak load; gas turbine

Gas turbines are used for wide range of services, most notably for producing power. Gas turbine-based power plants have gained a lot of attention, due to their simple design, sufficiently high economic efficiency, and low construction costs [1,2]. Further, they have been recognized for their good environmental performance, manifested as low environmental pollution [3]. Therefore, interest in gas turbines has been growing for the application of grid-independent small-scale generation systems, industrial generation systems, and isolated microgrid systems [4,5]. These small generation systems or microgrids are expected to achieve highly effective energy utilization. However, the performance of these plants are strongly affected by non-uniform electric-demand schedules, as they are not connected with a grid [6,7,8]. Load demand variations have been shown to greatly affect electricity production, fuel consumption, and plant incomes [9,10,11,12,13]. In addition, when gas turbines operate under varying duty conditions, the lifetimes of primary thermos-stressed components are considerably reduced and, consequently, repair costs increase [14]. Based on these facts, the assessment of gas-fired microgrid performance has become paramount.
In the literature, very few studies are available which have addressed this issue. In [15], a framework was developed to assess the performance and quantify the reliability of a fuel-based grid-connected microgrid, considering different power production scenarios in a regional system. However, no economic analysis was presented. To evaluate the performance of a gas-fueled islanded microgrid, an AC load flow technique was used in the MATLAB environment in [16]. Future directions were also outlined from the analyzed results, in order to improve the overall performance of the microgrid. However, the study made no attempt to deal with an economic analysis. Although an economic analysis of gas-fueled power plants was presented in [17,18], the costs (i.e., fuel costs) due to non-optimal production were not been analyzed. Additionally, these studies focused on large-scale generation systems. Thus, the scalability of these studies for microgrids in a real scenario remains ill-defined. Overall, the existing literature indicates that research on this issue is still in its infancy, and a multitude of issues are still un-addressed.
Therefore, this study was initiated to investigate the performance of an islanded microgrid, in order to ensure plant profitability with considerable cost savings (related to maintaining maximum fuel efficiency and availability). The importance and originality of this paper are summarized as follows:

Power generation in Malaysia significantly depends on three major fossil fuel sources: Coal, natural gas, and fuel-oil [19]. In 2015, the ratio of gas-fired power generation was 46.3% of the total electricity production capacity, and coal was 41% [20]. Energy generation from different sources in Malaysia is depicted in Figure 1.
Since the commencement of natural gas exploration in 1983, gas has contributed significantly to the energy mix, replacing fuel oil as the main energy source [20]. Interest in natural gas-fired power generation has increased, due to the plentiful natural gas resources. In conjunction with the availability of natural gas resources, the high efficiency, low installation costs, and good reliability of gas turbine generators have made them popular in the power industry in Malaysia. In addition, the installation of gas turbine generators and connection of them to the national grid is faster, in comparison to other generators, such as steam turbine power plants [21]. As can be seen from the summary of the installed capacity (presented in Table 1), up until 2014 the installed capacity of natural gas-fired power plants was 15,248 MW.

The system evaluated in this study is the electrical network of Universiti Teknologi PETRONAS (UTP), located in Perak, Malaysia. The electrical demand of UTP is supplied by an islanded microgrid consisting of two gas turbine generators located in the gas district cooling (GDC) plant in UTP. The rated capacity of each generator is 4.2 MW. Therefore, the total capacity of the microgrid is 8.4 MW. The UTP microgrid generates 11 kV and distributes along a 3–5 km distribution line before stepping down to 415 V. It supplies the offices, academic buildings, and residential villages (student accommodation) of UTP.

The required data for this study was collected from the UTP gas turbine power generation station. These are inventory records of daily energy generation between January 2017 and December 2017. A brief summary of the collected data is presented in Table 3. This table provides detailed information about the monthly energy production of microgrid, losses, average running hours, and capacity factor for the period under consideration (January–December 2017). By processing the data, the capacity factor, load factor, utilization factor, and other performance indices were evaluated.

The performance of a gas turbine generation system depends on several indices. Some of these are inextricable parts of a performance evaluation study. These important factors are discussed below in detail.

Load factor is a useful technique to measure the efficiency of energy utilization in a plant. It determines how efficiently electricity is being used, and is defined as the ratio of the average load to the peak load for a particular period of time. The load factor of the microgrid can be expressed by where is the average power demand and is the peak load in given period of time [22]. Daily, monthly, and annual load factors can be calculated, depending upon the number of hours in a day, month, and year, accordingly. A low load factor means an electricity system is operated inefficiently, as well as uneconomically [23]. Therefore, a high load factor is a desirable quality for making a plant economically feasible. A high value of load factor ensures greater average load through the utilization of the total plant capacity for the maximum period of time [24]. Thus, the fixed cost (which is proportional to the peak load) is distributed over a greater number of generated units (kWh). As a result, the overall cost of the electric energy supply will be lesser [10]. Thus, improvement of the load factor is necessary to reduce the energy costs and make the plant more profitable. To improve the load factor, peak electrical load needs to be reduced.

Plant operating factor is defined as the ratio of the duration during which the plant is in actual service to the total duration of the time period considered [25].

This factor is important to measure the degree of utilization of the installed equipment in a generating plant. It is defined as the ratio of the actual energy (kWh) produced over a given period of time to the maximum possible energy produced from the plant during a particular time: where refers to the total generated energy (kWh) during the specified period of time, is the installed or rated capacity of the plant, and is the total number of hours in the specified period [25,26,27].

6.1. Performance of the Test Microgrid

6.2. Cost of the Peak and Part Load Operations

(i)
Operating the gas turbine generator at the optimum production level;
(ii)
scheduling the generators of microgrid most economically; and
(iii)
reducing the gap between average load and peak load.

An energy storage system could play a primary role in achieving these goals.

Performance evaluation and economic analysis of a gas-fueled microgrid (owned by the Universiti Teknologi PETRONAS, Malaysia) were presented in this research work. The results of this study indicate that the performance of the UTP microgrid was far below the optimal level, due to the huge gap between average load and peak load. This situation can be greatly enhanced by improving the average load. Further, the economic analysis results revealed that the operational cost of the microgrid was high, due to the high fuel consumption rate resulting from the peak and part-load operations. These results also indicate that a mere % improvement in fuel efficiency could save as much as 17,379.793 USD per year.
The main limitation of the current study was that all factors affecting the performance of a gas turbine-based power generation system were been considered. The current study forms a basis from which future endeavors may analyze gas turbine microgrid systems in greater detail. More factors can be incorporated into future analyses to better understand the performance of gas-fueled islanded microgrid systems.

This research was funded by the Petroleum Research Fund, Board of Trustees (Grant number 0153AA-H25) (PRF-BOT) and Yayasan Universiti Teknologi PETRONAS (YUTP).

The authors acknowledge Universiti Teknologi PETRONAS for their support to perform this research. 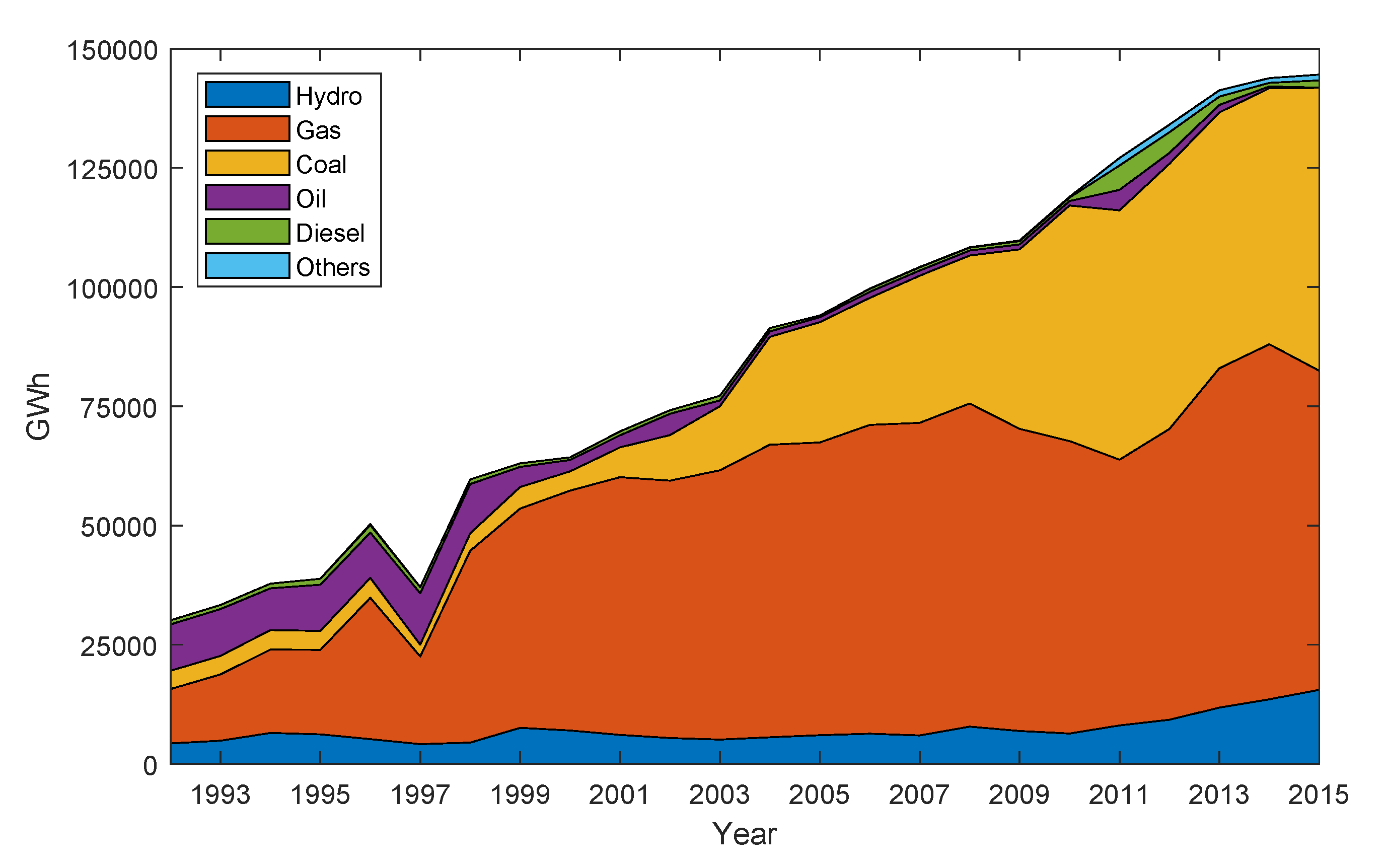 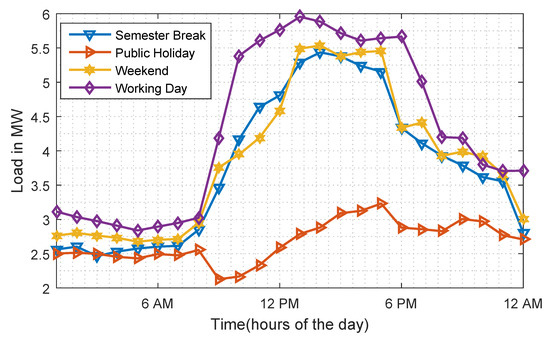 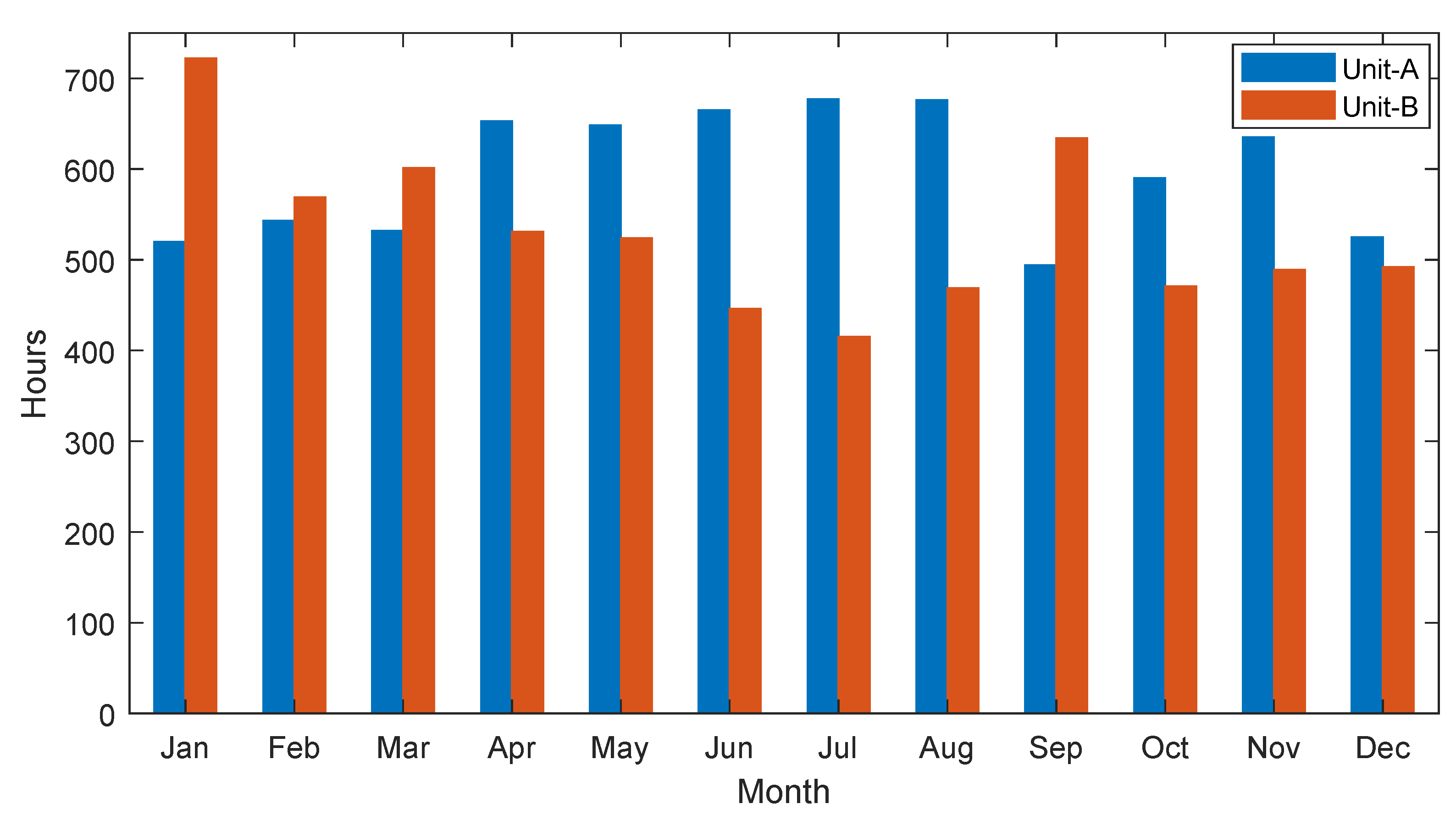 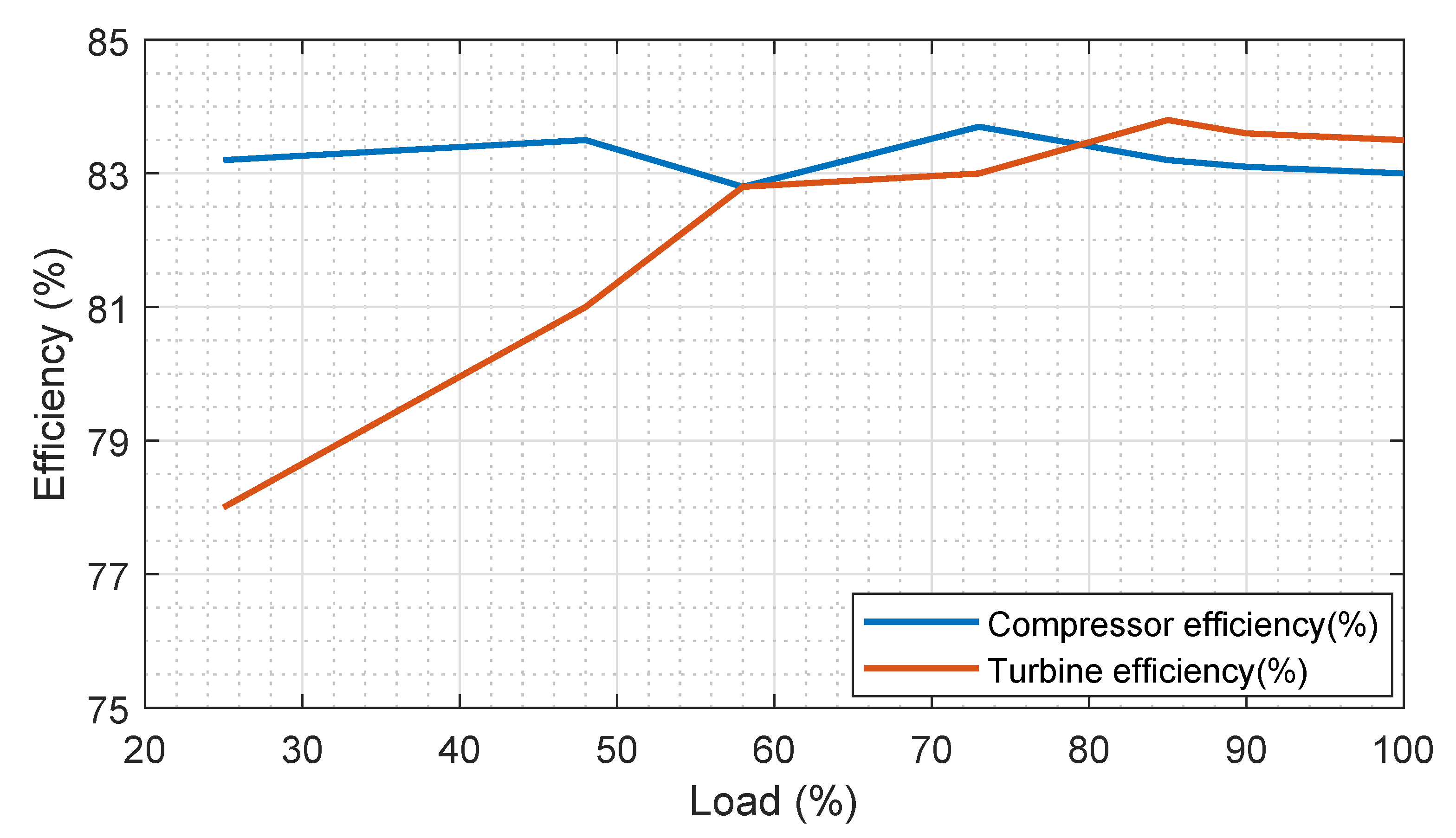 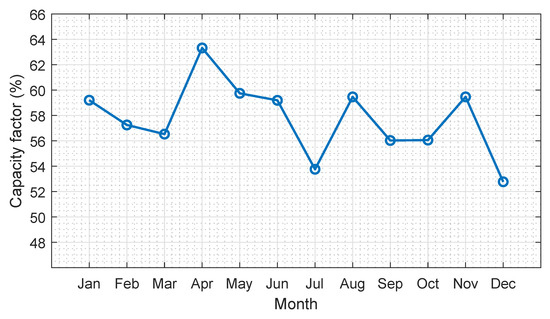 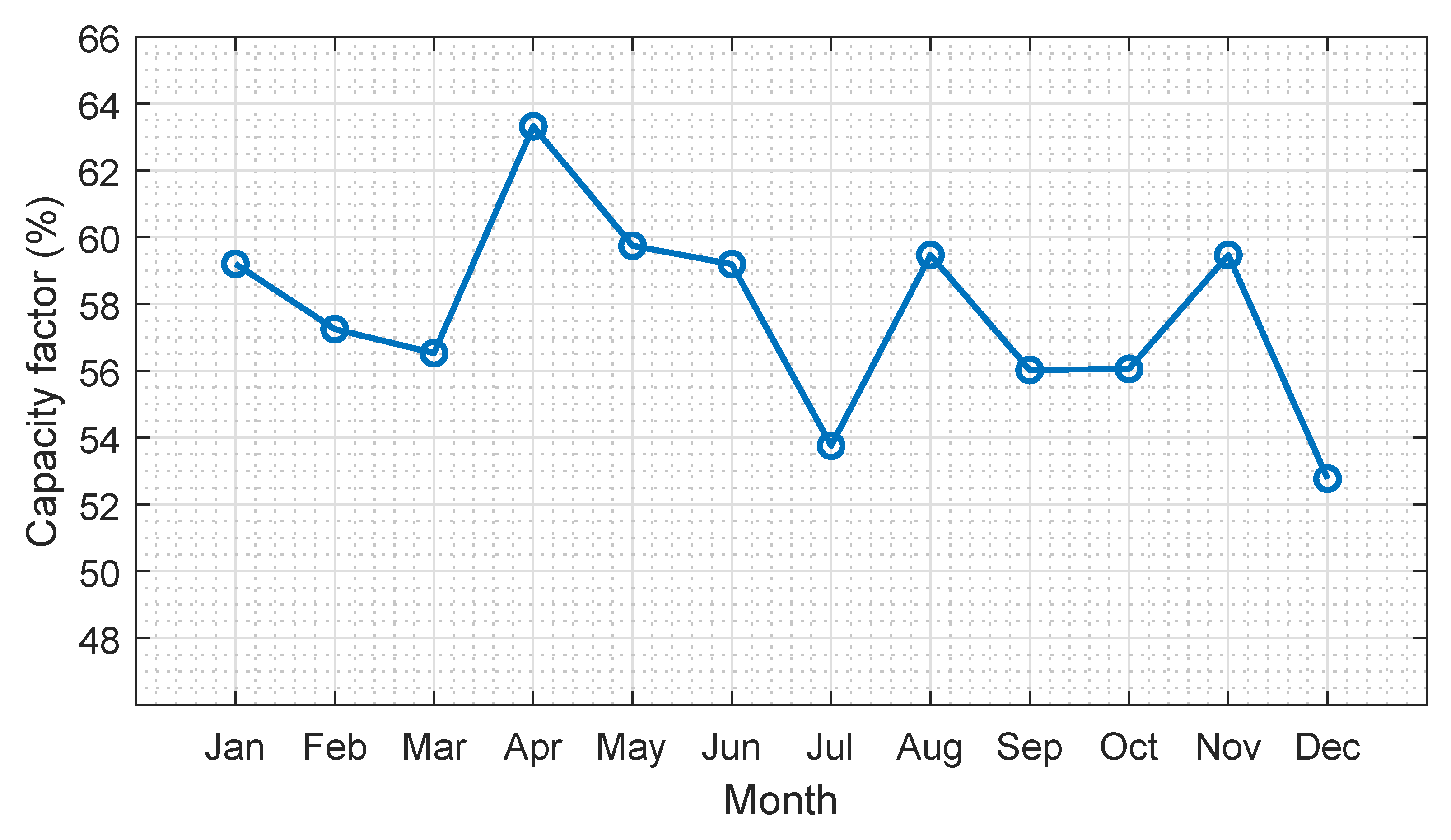 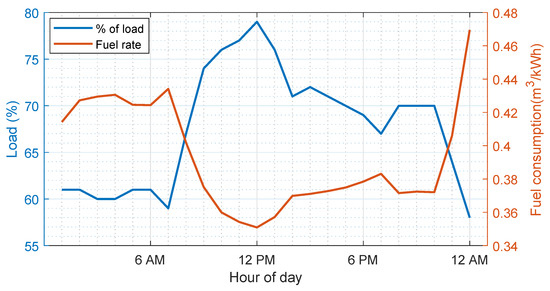 Table 4. Monthly energy production and fuel consumption.
Table 4. Monthly energy production and fuel consumption.
© 2019 by the authors. Licensee MDPI, Basel, Switzerland. This article is an open access article distributed under the terms and conditions of the Creative Commons Attribution (CC BY) license (http://creativecommons.org/licenses/by/4.0/).
We use cookies on our website to ensure you get the best experience. Read more about our cookies here.
Accept
We have just recently launched a new version of our website. Help us to further improve by taking part in this short 5 minute survey here. here.
Never show this again