In this study, the performance of an islanded gas turbine power generation system in Malaysia was investigated. Considering the low fuel efficiency of the plant during peak and part-load operations, an economic analysis was also carried out, over the period of one year (2017). The case study was conducted on the isolated electrical network of the Universiti Teknologi PETRONAS (UTP), which consists of two gas turbine units with a total capacity of 8.4 MW. Simple performance indicators were developed to assess the performance, which can also be applied to other power stations in Malaysia and elsewhere. Meanwhile, the economy of variable load operations was analyzed using the statistical data of generation, fuel consumption, and loads. The study reveals that the capacity factor of the microgrid in the period was between 52.77–63.32%, as compared to the industrial best practice of 80%. The average plant use factor for the period under review was 75.04%, with a minimum of 70.93% and a maximum of 78.61%. The load factor of the microgrid ranged from 56.68–65.47%, as compared to the international best practice of 80%, while the utilization factor was between 44.22–67.655%. This study further reveals that high fuel consumption rates, due to the peak and part-load operations, resulted in a revenue loss of approximately 17,379.793 USD per year. Based on the present performance of the microgrid, suggestions are made for the improvement of the overall performance and profitability of the system. This work can be valuable for microgrid utility research to identify the most economical operating conditions. View Full-Text
Keywords: gas-fueled-microgrid; peak load; gas turbine gas-fueled-microgrid; peak load; gas turbine
►▼ Show Figures 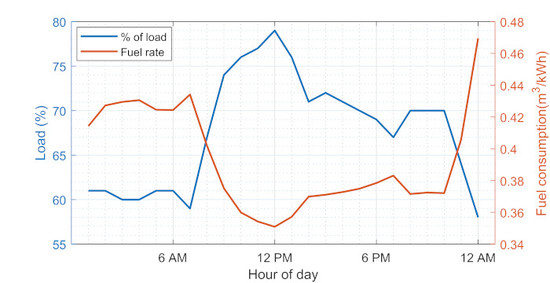