Worldwide, infrastructure contains millions of isolated subsurface structures. Most, if not all, meet requirements for classification as confined spaces. Workers routinely enter and work in these structures. Ventilation of these spaces by air exchange induced by natural forces was documented first in 1936. The mechanism of the process remains to be discovered. This investigation utilized ‘smoke’ tubes to visualize air motion and video capture techniques to record the process. Air moved across the surface of the ground and unpredictably entered the airspace when a single opening in the manhole cover was present. The process is discrete and not continuous. Air moved downward linearly or in circular motion, and moved across the underside of the manhole cover in the direction opposite airflow and down the sidewall of the structure. This produced the rapid mixing in the airspace observed instrumentally. For two openings, entry was more aggressive and predictable. Separation between the openings influenced exchange. Closer spacing (center + circumference) produced better ventilation than wider spacing (circumferential openings opposite each other). Optimizing naturally induced ventilation of these structures has profound importance to minimize risk to passersby and workers who enter and work in them. View Full-Text
Keywords: visualization of near surface air motion; ‘smoke tubes’; isolated subsurface structure; natural forces; video recording visualization of near surface air motion; ‘smoke tubes’; isolated subsurface structure; natural forces; video recording
►▼ Show Figures 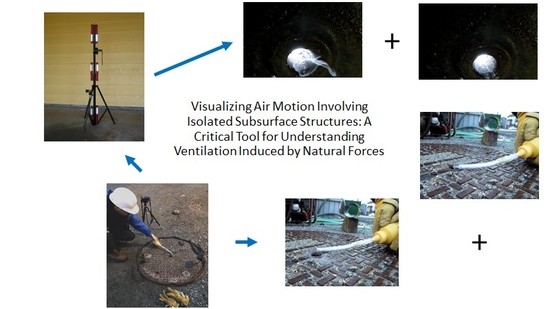