Fused filament fabrication (FFF) is a well-known and greatly accessible additive manufacturing technology, that has found great use in the prototyping and manufacture of radiofrequency componentry, by using a range of composite thermoplastic materials that possess superior properties, when compared to standard materials for 3D printing. However, due to their nature and synthesis, they are often a great challenge to print successfully which in turn affects their microwave properties. Hence, determining the optimum printing strategy and settings is important to advance this area. The manufacturing study presented in this paper shows the impact of the main process parameters: printing speed, hatch spacing, layer height and material infill, during 3D printing on the relative permittivity (εr), and loss tangent (tanδ) of the resultant additively manufactured test samples. A combination of process parameters arising from this study, allowed successful 3D printing of test samples, that marked a relative permittivity of 9.06 ± 0.09 and dielectric loss of 0.032 ± 0.003.
Keywords: 3D printing; artificial dielectrics; materials 3D printing; artificial dielectrics; materials

For more than two decades, polymers and their functional composites have received great attention due to their potential to be used in a variety of applications in electronics, such as piezo-resistive/electric devices, conductors, etc. [1]. Polymers are typically materials of low relative permittivity or dielectric constant (εr, where in order to increase their dielectric performance they are infilled with a high dielectric constant ceramic material (e.g., BaTiO3), in either a micro or nanoparticulate size, to form a polymer composite [2].
Such high dielectric performance polymer composites are of great use in the fabrication of electronic components and lately, they have attracted real interest, for their potential to be integrated into modern radio-frequency (RF) devices operating at microwave frequencies [3]. Ceramic materials have mostly been used in such applications due to their high dielectric constant and low dielectric loss [4], and an enormous amount of research and effort has been afforded for development of novel ceramic materials [5]. However, production of ceramic components comes with several disadvantages such as high tooling costs and challenging implementation, since high temperature processing is required in order to achieve structural integrity and their desired dielectric properties.
Additive manufacturing (AM), commonly known as 3D printing, offers a great deal of flexibility in the manufacture of complex three-dimensional geometries in near net-shape, eliminating any costs associated with tooling and post-processing. Fused filament fabrication (FFF), belongs to the material extrusion process category, as defined in the ISO/DIS 17296 standard, in which a thermoplastic material is drawn via a heated nozzle and deposits material in layer-by-layer manner to form three-dimensional objects. FFF is a particularly attractive 3D printing process, as it uses equipment of low complexity and it is relatively inexpensive. Despite it being only 30 years old, FFF has only recently become very popular in academia, especially during the past decade. One of the significant events was the expiration of the FFF printing process patent in 2009, which led to a heavy decline in printer prices and made them accessible to the larger public. The commercialization of printers has also boosted the development and commercialization of FFF filaments.
Previously high dielectric constant filaments have been made by stirring dissolved plastics with ceramic particles. This is a time-consuming and expensive method and is nowadays commercially replaced by melt compounding of the components. FFF filaments are typically made in two steps. First, a twin-screw extruder is used to compound the polymer, ceramic filler and various additives to make plastic granules. Secondly, these granules are fed to a machine that makes the 3D-filaments. This machine typically contains a single-screw extruder, precision nozzle, cooling line, haul-off machine and a winder. Additionally, the line can also contain optical scanners to monitor the filament thickness or material driers before the hopper, to achieve good dimensional accuracy.
Although 3D printing in general can be used to manufacture virtually anything, the rise of high permittivity filaments has been mainly due to miniaturization of RF parts in the microwave region. One of the most typical applications where high permittivity filaments have been used is beamforming with flat Fresnel zone or graded index lenses. A desirable lens form factor, i.e., a flat shape, can be achieved using the high permittivity material and varying the infill percentage to obtain an effective εr, which varies radially along with the lens [6]. Benefits of high permittivity materials have also been demonstrated in antennas [7,8], reflect arrays [9] and dielectric rod waveguides [10].
Very limited work has been reported to date, with regards to high permittivity polymer composite materials suitable for FFF-type 3D printing. Castles et al. reported on the fabrication of a series of composites composed of a BaTiO3/ABS polymer composite, which could be used with a commercial desktop FFF-type 3D printer to produce parts containing user defined regions of relative permittivity. The authors reported polymer composite blends with ceramic solid loadings of up to 70 wt.%, relative permittivity in the range of εr = 2.6–8.7 and loss tangents in the range of 0.005–0.027 [11]. Later on, Wu et al. presented an optimised blend, comprising of BaTiO3/ABS with volume ration of the infilling material up to 32 vol.% and a maximum relative permittivity value of εr = 11, in the GHz frequency range [12]. To the best of our knowledge, the studies reported above, cover all the research activities taking place in producing high relative permittivity polymer composites for fused filament fabrication type 3D printing.
However, it would seem that none of these studies have disseminated information with regards to their printability or have investigated how processing conditions are likely to affect the performance of the bulk printed materials. Since FFF has traditionally been used for prototyping purposes, and given its low level and low-cost nature, little attention has been given during the development of the technology to study and optimise the full density of the fabricated components. This is nevertheless expected since FFF-made builds are not intended to be fully functional prototypes and process-related defects, such as porosity/air gaps are not considered important. This is not the case though for dielectric materials, since such imperfections can be detrimental to the performance of the fabricated RF component.
In this work, we present a manufacturing study, using a high permittivity polymer composite filament for FFF-type additive manufacturing. The resulting dielectric properties of the 3D printed samples are assessed, according to the process-related parameters used, such as printing speed, hatch spacing, layer height and material infill.

The experimental material used in this study was produced by Premix Oy (TP20907, Rajamäki, Finland) in filament form of 1.75 ± 0.1 mm diameter. It is a proprietary composite comprising of an acrylonitrile-butadiene-styrene (ABS) matrix, that contains a ceramic infill of a high relative permittivity.
All manufacturing experiments were carried out on a multi-process additive manufacturing kit (Hydra 16A, Hyrel3D, Norcross, GA, USA) equipped with a filament extrusion module (MK1-250, Hyrel3D, Norcross, GA, USA), fitted with a brass nozzle of 0.5 mm diameter. To assure better adhesion of the first layer, all test samples were printed on adhesive Kapton film of 75 μm thickness, that was placed on top of build surface, heated at 110 °C.
The composite thermoplastic filament was subjected to differential scanning calorimetry (DSC) (2920 Modulated DSC, TA Instruments Inc., New Castle, DE, USA), to identify the thermophysical properties of the material, such as glass transition, decomposition temperature and any other thermophysical material interactions during heating. Those properties helped to identify processing conditions such as the temperature of the build surface and extrusion. DSC was operated under an argon gas environment with a 200 mL/min−1 purging rate, at a heating rate of 10 °C·min−1 from room temperature up to 350 °C. All samples were introduced in high purity aluminium pans with an empty pan used as a reference to calibrate the baseline.
The morphological features of the 3D printed structures, such as internal porosity were investigated using light optical microscopy (LOM) (Eclipse MA200, Nikon Instruments Europe, Netherlands), where the dispersion of the ceramic infilling material into the thermoplastic host was depicted using scanning electron microscopy (SEM) (TM3030 SEM, Hitachi High-Technologies Europe GmbH, Germany). SEM samples were coated with a gold/palladium alloy in an 80:20 weight ratio, for 90 s at 25 mA using a sputter coater (Quorum Q150T, Quorum, Edwards, Hastings, UK).
The dielectric properties of the additively manufactured samples were determined by placing the printed samples of 22.86 × 10.16 × 2.5 mm size, into an X-band waveguide cavity (8.2–12.4 GHz), measuring the transmission and reflection from the target sample, connected to a Vector Network Analyser (VNA) (MS465B22, Anritsu, Japan) using coaxial cables. Relative permittivity (εr) and loss tangent (tanδ) were calculated using the Nicolson-Ross-Weir method [13]. All reported measurements are reported as an average out of 5 different 3D printed samples together with standard error.

FFF is a common and widely adopted 3D printing technology that can also potentially be used for rapid manufacture of functional prototypes for telecommunication and microwave/RF devices. This can be achieved by using composite thermoplastic materials that possess superior dielectric properties, such as: higher relative permittivity (εr) and low loss (tanδ), that are hardly realised by conventional thermoplastics. However, the electromagnetic properties of those 3D printed parts are often not comparable to the properties of the bulk material, due to process-related deficiencies subject of the printing parameters being used. The major findings of this paper are summarised in the following bullet points:

This work was supported by EPSRC research grant SYMETA (EP/N010493/1).

The authors would like to thank the technicians in the Loughborough Materials Characterisation Centre (LMCC) for their help with the analytical equipment. 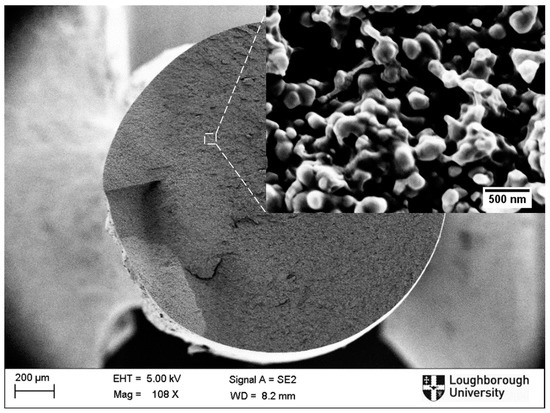 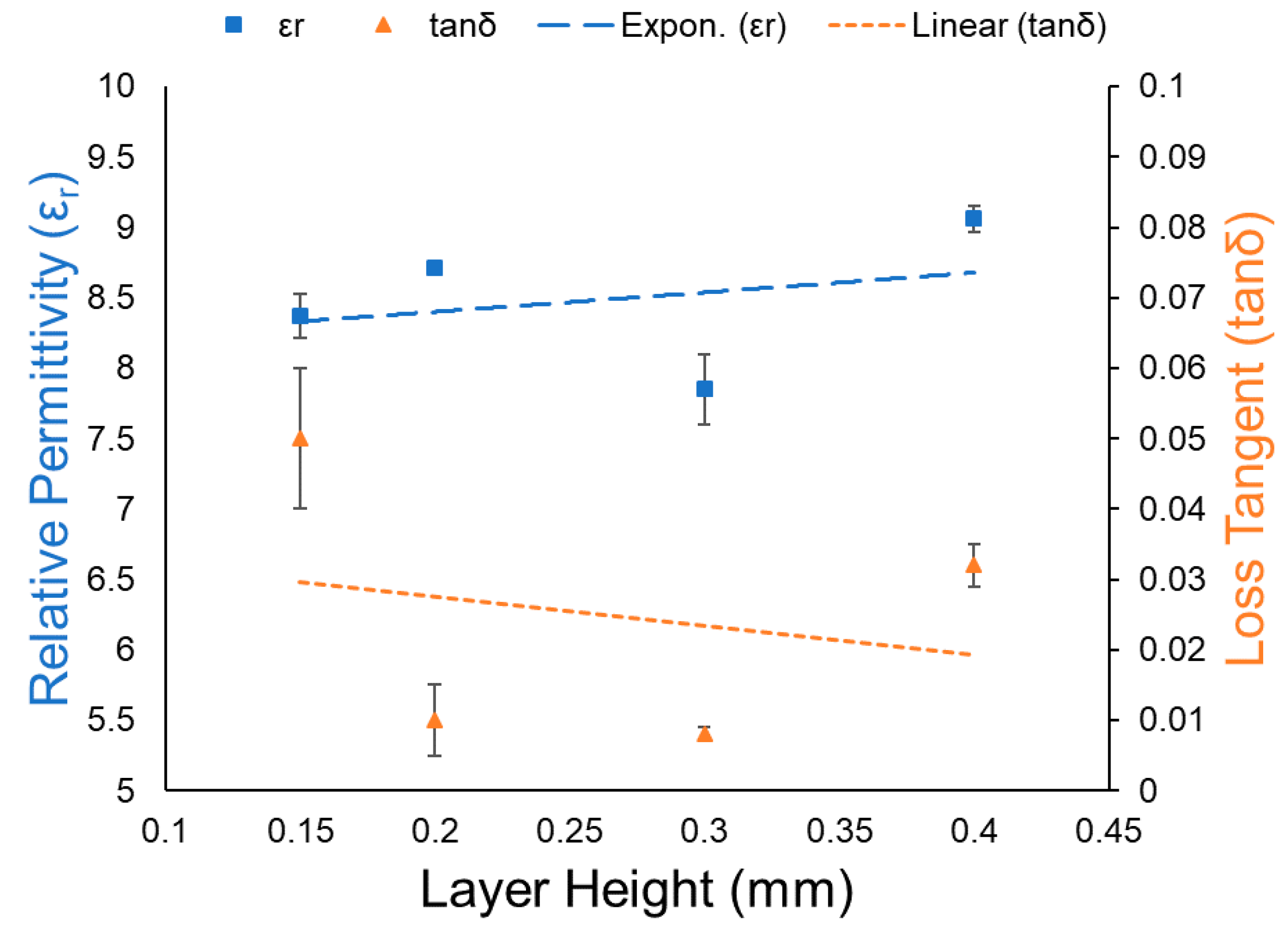 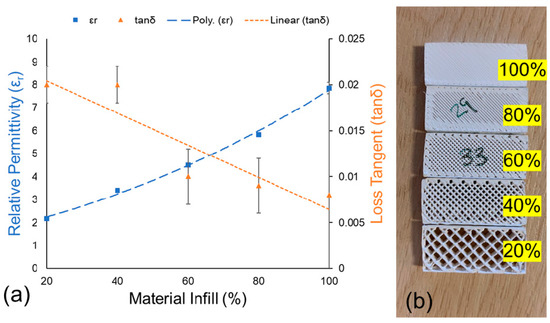 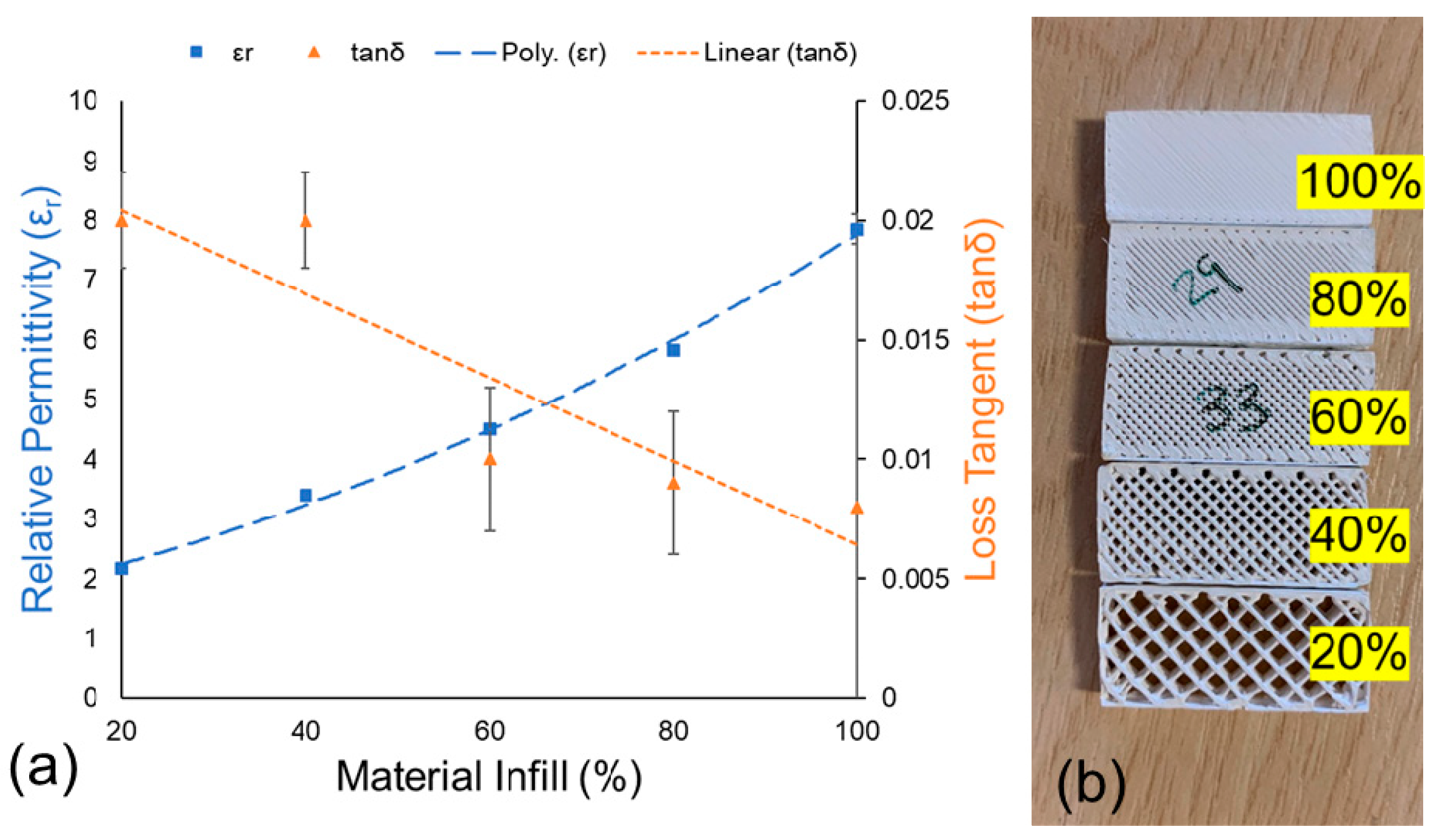