Beyond the Vestibulo-Ocular Reflex: Vestibular Input is Processed Centrally to Achieve Visual Stability

:
The current study presents a re-analysis of data from Zink et al. (1998, Electroencephalography and Clinical Neurophysiology, 107), who administered galvanic vestibular stimulation through unipolar direct current. They placed electrodes on each mastoid and applied either right or left anodal stimulation. Ocular torsion and visual tilt were measured under different stimulation intensities. New modelling introduced here demonstrates that directly proportional linear models fit reasonably well with the relationship between vestibular input and visual tilt, but not to that between vestibular input and ocular torsion. Instead, an exponential model characterised by a decreasing slope and an asymptote fitted best. These results demonstrate that in the results presented by Zink et al. (1998), ocular torsion could not completely account for visual tilt. This suggests that vestibular input is processed centrally to stabilise vision when ocular torsion is insufficient. Potential mechanisms and seemingly conflicting literature are discussed.
Keywords:
visual stability; galvanic vestibular stimulation; visual tilt; ocular torsion; multi-sensory integration

To fit Equations (1)–(6) to the data reported by Zink and colleagues (reproduced in Table 1), the unsigned results from left-anodal and right-anodal stimulation were first averaged. Then, using least squares estimation in a full exploration of parameter space, the optimal combination of parameter values were assessed for the three types of models outlined above (linear, directly proportional linear, and exponential) for ocular torsion and visual tilt independently.
Fitting was performed in custom Python scripts [14,15], using NumPy [16] for computations and Matplotlib [17] for plotting. This code is available from GitHub on https://github.com/esdalmaijer/zink_et_al_1998_re-analysis.

For visual tilt under galvanic vestibular stimulation (Figure 3, in yellow), a directly proportional model (Equation (4)) explained 87 percent of the variance and an exponential model (Equation (6)) explained 73 percent.
A linear model with a free intercept variable (Equation (2)) accounted for the same amount of variance as the directly proportional linear model, because the best fitting parameters were equal for both (a slope of 1.42 degrees per mA, and an intercept of 0).

3.4. Visual Tilt as a Function of Ocular Torsion

In the current study, data from Zink and colleagues (1998) was reanalysed using models that more accurately reflected biology, specifically the non-tilted position of the eye at no vestibular input. Zink and colleagues applied galvanic vestibular stimulation, using a unipolar and direct current, and measured either ocular torsion or visual tilt. In the current study, it is demonstrated that a directly proportional linear model fits the data from both measures relatively well. However, ocular torsion is better described by a model with an exponentially decreasing slope that moves towards an asymptote. These results show that with increasing vestibular stimulation, ocular torsion slopes down, whereas visual tilt keeps increasing linearly. The lack of a linear relationship between the vestibular effects on ocular torsion and on visual tilt suggests that ocular torsion is not the sole contributor of visual tilt, but that instead vestibular input could be processed centrally to maintain visual stability.

In multi-sensory research, the most simple explanation for the interaction between two senses (e.g., the vestibular and visual system) is often stochastic resonance [18]. Stochastic resonance occurs when the general level of activation of multi-sensory neurons is heightened by a stimulus (e.g., galvanic vestibular stimulation or auditory noise), which leads to a higher sensitivity to faint stimuli from another sense (e.g., tactile information) that on its own would lead to sub-threshold activation for detection. An example of such a study is by Ferrè and colleagues [19], who showed that galvanic vestibular stimulation indeed leads to a higher sensitivity for a faint tactile stimulus. They offer an explanation based in stochastic resonance, hypothesising simultaneous activation of bimodal neurons in parietal opperculum. However, the data from Zink and colleagues re-analysed here cannot be explained by stochastic resonance, as the observed visual tilt was direction-dependent on the stimulation’s current direction.
An alternative explanation is that vestibular information is processed in the visual cortex. When the heads of anaesthetised cats with fixated eyeballs are rolled, the receptive fields of a proportion of neurons in their visual cortex tilt as a result [1,2,3]. This suggests that a mechanism might exist by which head roll that is not otherwise compensated for is compensated for by the rotation of receptive fields.
Contrary to the above, non-anaesthetised cats with non-fixated eyeballs do show tilt in receptive fields in a proportion of neurons in visual cortex, but they are uncorrelated with head roll [4]. It was suggested that receptive field tilting was a response to general arousal rather than a systematic processing of visual tilt.

4.2. Alternative Explanations for a Non-Linear Relationship between Vestibular Input and Ocular Torsion

Another potentially interesting role of vestibular input is highlighted by Shuren and colleagues, who rotated participants in a revolving chair before asking them to perform a line bisection task. After leftward rotation, participants showed an increased leftward bisection error, suggesting that vestibular input might induce an attentional bias [23].
Further evidence for a potential role of vestibular functioning in spatial attention is provided by studies of vestibular stimulation in neglect syndrome. Neglect syndrome occurs primarily after damage to right parietal cortex, and patients display a strong attentional bias towards ipsilesional space. Neglect patients but not control patients (with similar lesions but without neglect) show deviations of their perceived visual vertical during roll head movements [24], and exhibit a larger deviation of subjective visual vertical and horizontal [25]. Furthermore, neglect symptoms decrease during [26] or immediately after caloric vestibular stimulation, but these effects do not linger for more than 15 min [27].

I would like to thank Ignace Hooge, Lotte van Nierop, and Martine van Zandvoort for their comments on an earlier version of this manuscript. In addition, I am indebted to an anonymous reviewer who interpreted the presented results with a great mastery of the literature on galvanic vestibular stimulation in response to the submission of an earlier version of this manuscript to Journal of Vision, and to two anonymous reviewers of the current submission to Vision. A pre-print of this manuscript was published on bioRxiv: https://doi.org/10.1101/260299. 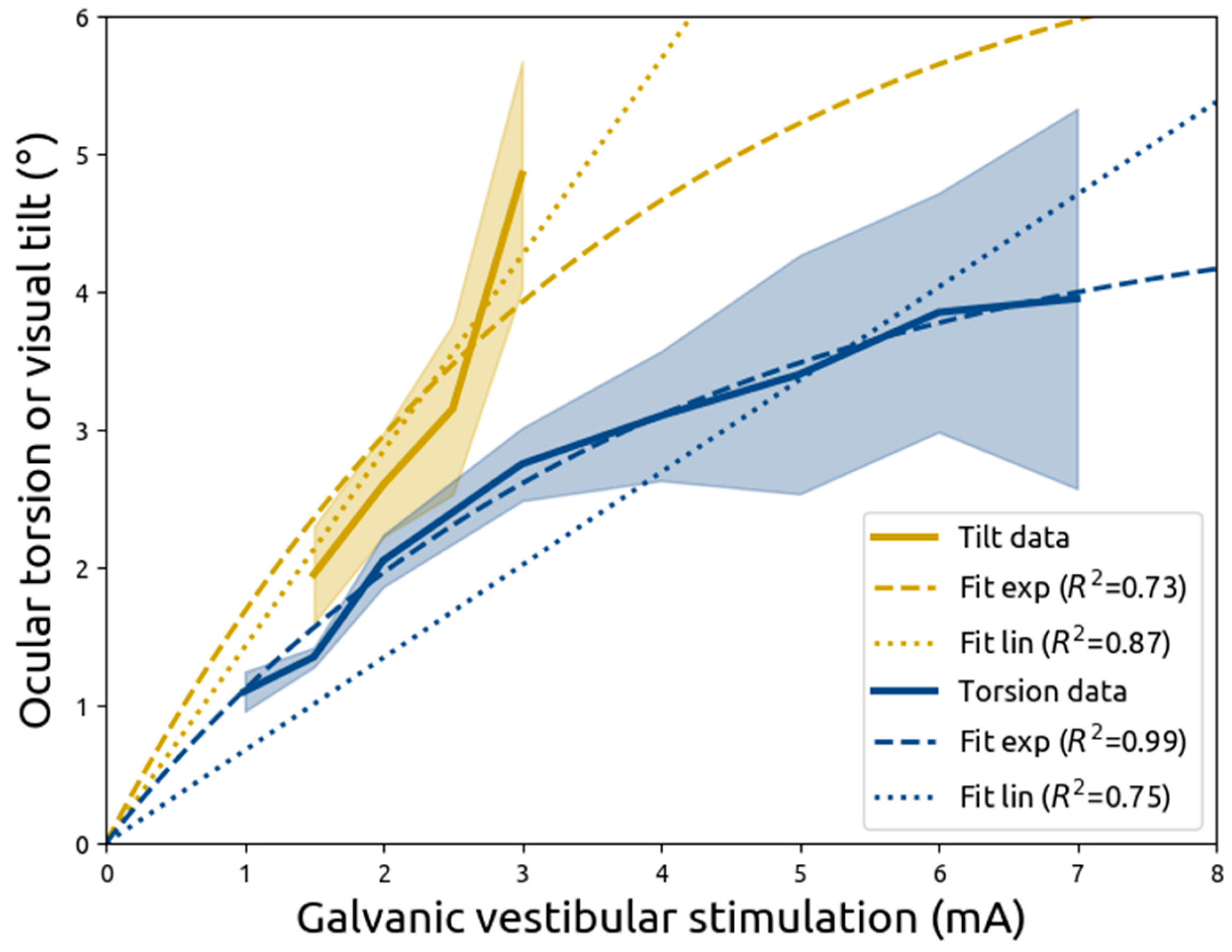