The following study was conducted with the participation of female athletes from a National Collegiate Athletic Association (NCAA) (Indianapolis, Indiana) Division II college. The study included women from six of the women’s varsity sports teams: Women’s basketball, volleyball, track, cross-country, triathlon, and soccer. Women had to be at least 18 years old to participate in the study. Following a practice, all athletes interested in participating in the study gave informed consent and filled out a general health assessment and an Eating Disorder Inventory-3 (EDI-3) questionnaire [12]. Injury data were compiled for each athlete at the end of the season. The college’s institutional review board approved the study (Daemen College Human Subject Research Review Committee, E.ATH0716.164, 8 November 2016). Written informed consent was obtained from all the subjects prior to participation in the study.

A general health assessment asked the athletes to self-report race/ethnicity, age, anthropometric measures (e.g., height and weight used to calculated body mass index), current hormonal contraceptive use, age of menarche, number of menstrual cycles in the past 12 months, history or current diagnosis of an eating disorder, and previous sport-specific injuries (in the past 5 years).

A Drive for Thinness score (DT) was obtained from the EDI-3 questionnaire [12]. The questionnaire asks participants to circle which applies to you (Always, Often, Sometimes, Rarely, and Never) on a number of statements. Examples of questions on the Drive for Thinness Subscale include: I eat sweets and carbohydrates without feeling nervous, I think about dieting, I feel extremely guilty after overeating, I am terrified of gaining weight, I exaggerate or magnify the importance of weight, I am preoccupied with the desire to be thinner, and If I gain a pound, I worry that I will keep gaining. Women were grouped based on a median split of their drive for thinness score (High DT (score of 2 or greater) vs. Low DT (score of less than 2)). Scores for drive for thinness can range from 0 to 21. Patients with eating disorders typically score higher (>12) [13].

The Athletic Trainers used an electronic medical record database (SportsWare Online; Computer Sports Medicine, Inc., V1.80.3.0. 2016, Stoughton, MA, USA,) used to manage, report, and record all pertinent athletic training information. At the end of each of the participants’ sports seasons, musculoskeletal injury data were compiled using SportsWare for all of those athletes agreeing to participate. The data collected included injury diagnosis and the total time of sport participation lost.

All continuous variables were compared using independent t-tests (Low DT vs. High DT). Chi-square tests were used to explore the relationship between the Low DT Group and the High DT group for any categorical variable. An ANOVA was used to compare variables of interest (the drive for thinness score and the number of injuries) among teams. Forward multivariate stepwise regression using p = 0.05 for entry, and p = 0.10 to leave in the model was used to explore predictors of the number of in-season injuries. Variables included in the first model were variables associated with the female athlete triad, including a history of stress fractures, age of menarche, history of amenorrhea, oral contraceptive use, and drive for thinness. Variables included in the second model included subscales of the eating disorder inventory including body dissatisfaction, interoceptive awareness, drive for thinness, bulimia, ineffectiveness, interpersonal distrust, perfectionism, maturity fears, and the sum score. All data were analyzed using the SPSS for Windows (version 23.0, Chicago, IL, USA) statistical software package. Data are reported in mean ± SEM. 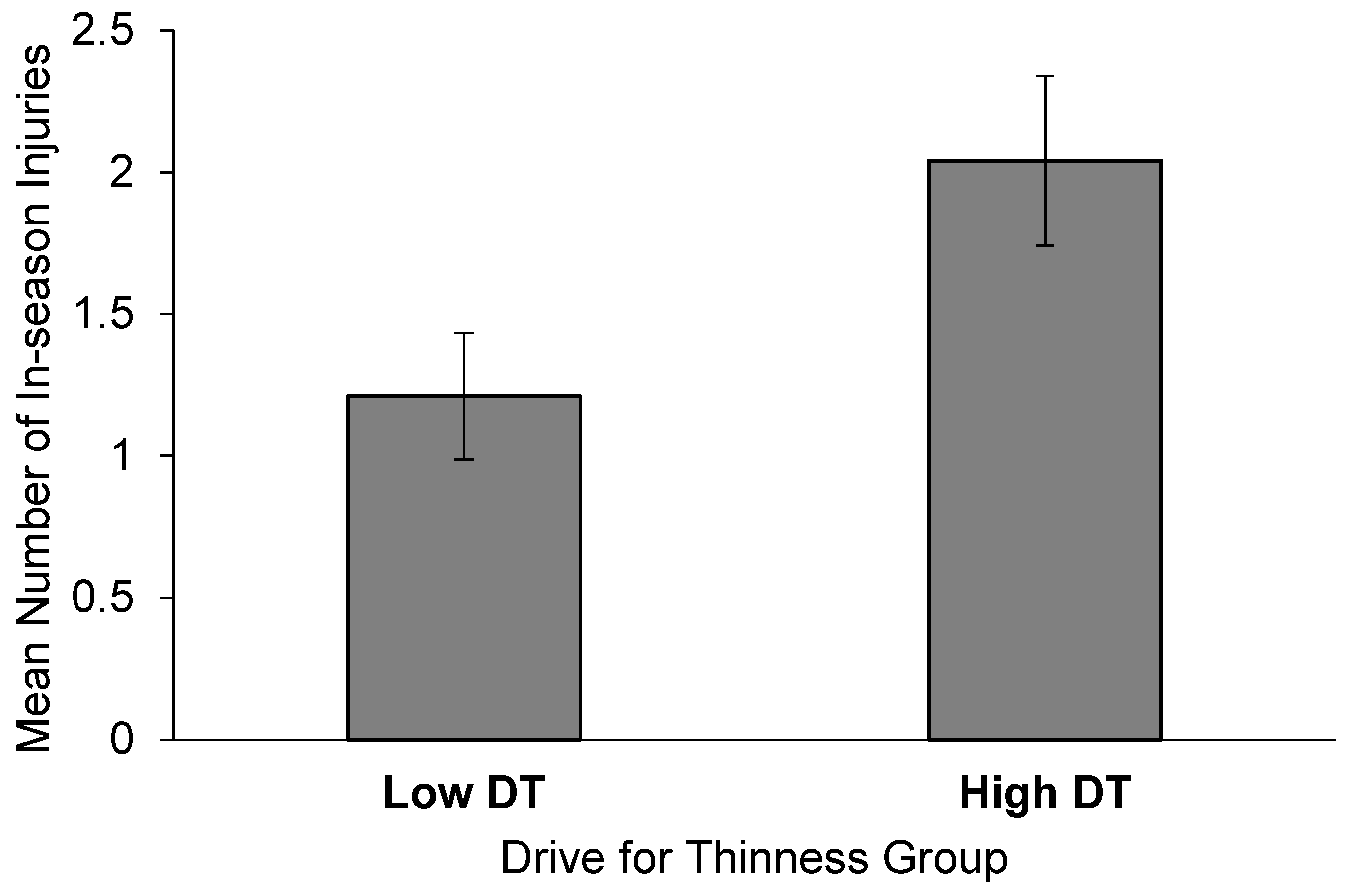 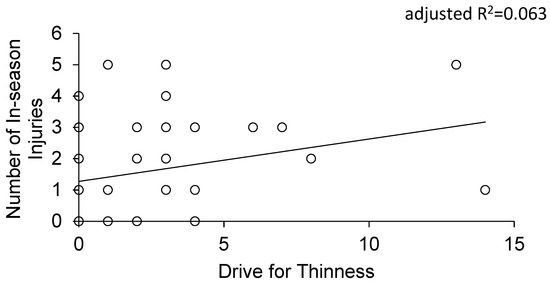 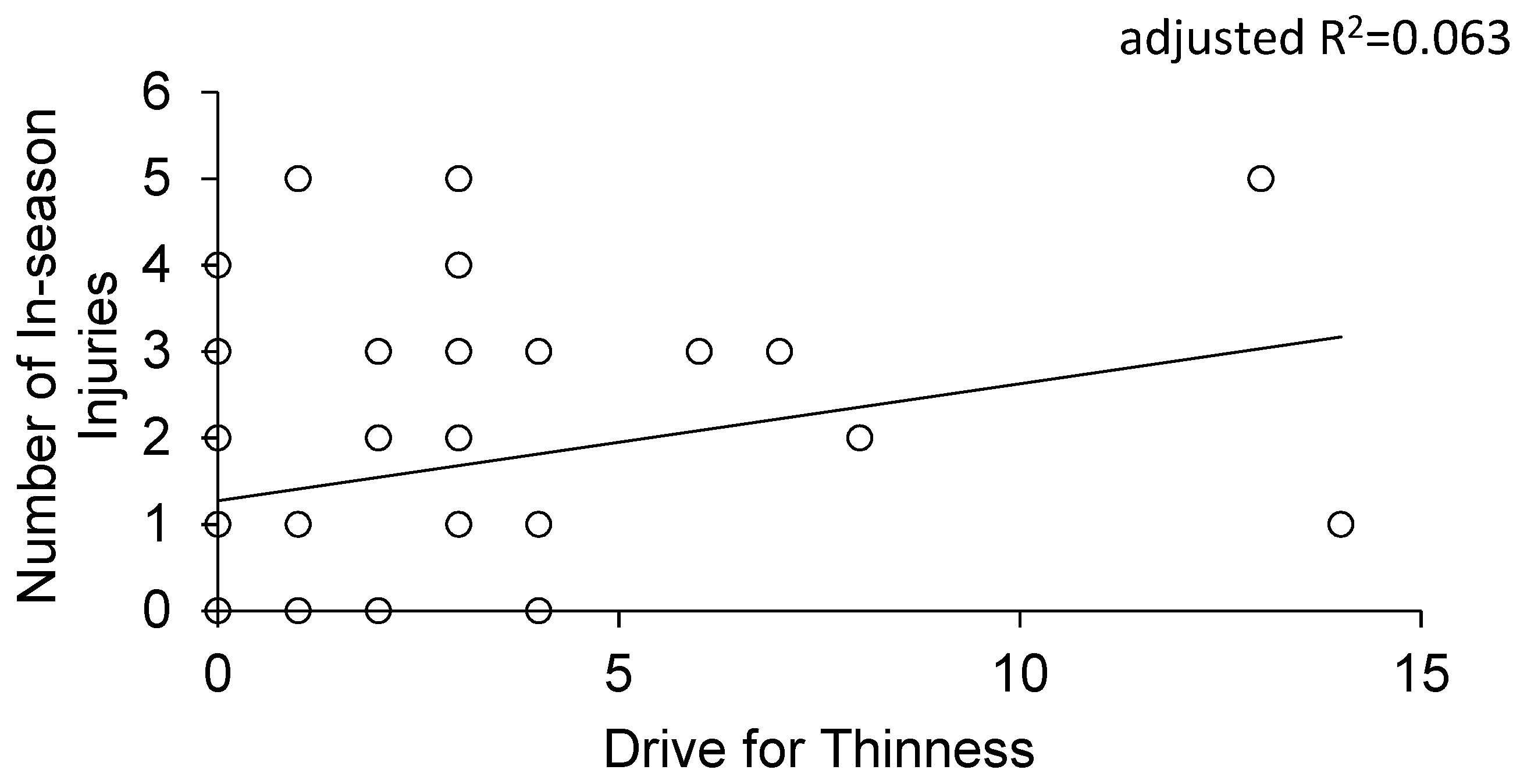