Effect of Overnight Fasted Exercise on Weight Loss and Body Composition: A Systematic Review and Meta-Analysis

It remains unclear whether training in fasted compared to fed states leads to greater weight loss and whether this practice results in beneficial or detrimental changes in body composition. We conducted a systematic review to examine the effect of overnight-fasted versus fed exercise on weight loss and body composition. Seven electronic databases were searched using terms related to fasting and exercise. Inclusion criteria were: randomised and non-randomised comparative studies; published in English; included healthy adults; compared exercise following an overnight fast to exercise in a fed state; used a standardized pre-exercise meal for the fed condition; and measured body mass and/or body composition. A total of five studies were included involving 96 participants. Intra-group analysis for the effect of fasted and fed aerobic exercise revealed trivial to small effect sizes on body mass. The inter-group effect for the interventions on body mass was trivial. Intra-group effects were small for % body fat and trivial for lean mass in females, with trivial effects also found for the inter-groups analyses. Whilst this is the first systematic review and meta-analysis to investigate this topic, caution is warranted when interpreting the findings due to the limited number of studies and hence insufficient data.
Keywords: weight loss; obesity; caloric restriction; exercise training weight loss; obesity; caloric restriction; exercise training

It is well acknowledged that body mass and composition are factors that can influence athletic performance. Diet and exercise play an important role in weight loss and promoting positive changes in body composition [1]. Based on the first law of thermodynamics, an imbalance between energy intake and energy expenditure as a result of diet and/or exercise is accounted for by a gain or loss of body mass [2,3]. However, it is generally recognised that the energy balance principle is over simplistic for individuals wanting to lose fat mass or gain lean mass. This was demonstrated by Longland et al. [4] who found higher compared to lower protein intake while following a hypocaloric diet, combined with intense exercise, led to greater increases in lean mass and loss of fat mass.
An interesting strategy that is claimed to aid weight loss and enhance the loss of fat mass is to perform aerobic exercise in a fasted state [5]. There are two types of fasting: the first type involves abstaining from food and fluids with exception of water (i.e., water fasting), and the second type involves abstinence from all food and fluids (i.e., dry fasting) [6,7]. Daily fasting is commonly performed and is referred to as the ‘overnight fast’ which for most people lasts between 8 to 12 h [8]. Furthermore, exercise in a fasted state may be more conveniently implemented when performed in the morning prior to breakfast (i.e., overnight-fasted). A recent review and meta-analysis examined the effect of aerobic exercise performed during fasted versus fed states in a total of 273 adult participants. The results of this previous meta-analysis indicated that aerobic exercise performed in a fasted compared to fed state induces higher fat oxidation [9]. Fat oxidation refers to catabolic processes that generate energy for bodily functions (e.g., muscle contraction and repair of body tissue) [10]. In non-fasted states, aerobic exercise acutely increases fat oxidation compared to resting conditions, and following aerobic training there is an increased capacity to oxidize fat during aerobic exercise [11]. Supposedly, to induce a reduction in fat mass requires a negative fat balance which can be achieved through altering energy intake and/or expenditure such that fat oxidation exceeds fat intake. Therefore it seems plausible that the increased fat oxidation from performing aerobic exercise in a fasted compared to a fed state may lead to greater weight loss via the creation of a larger negative net fat balance.
Therefore, the purpose of the current review was to employ a systematic review format to examine the effects of overnight-fasted versus fed exercise on weight loss and body composition. Information gathered from this review may be useful to coaches, athletes, and personal trainers when devising exercise training programs targeting weight loss.

Titles and abstracts of retrieved articles were individually evaluated by the two authors to assess their eligibility for review and meta-analysis according to the eligibility criteria detailed below. Any disagreements were settled by consensus with peers in the Department of Exercise and Sport Science, University of Sydney. Evaluation of full-text articles was required when abstracts did not provide sufficient information to assess eligibility for inclusion. In the event that an article had missing data or clarification of data was required, the corresponding author was contacted and the original data was requested. In the event that data was not able to be provided, the manuscript was excluded from review. Articles were eligible for inclusion if they met the following criteria: (1) randomized and non-randomized comparative studies; (2) published in English; (3) included healthy adults; (4) compared exercise following an overnight fast to exercise in a fed state; (5) used a standardized pre-exercise meal for the fed condition; and (6) measured body mass and/or body composition.
The two authors separately and independently evaluated full-text articles and conducted data extraction, using a standardized, predefined form. The data for the following variables were extracted: participant characteristics (sex, age, height, body mass, and training experience), fasting/nutritional intervention, exercise prescribed (training mode, training frequency, exercise intensity, sets, repetitions, rest between sets), and intervention length. Shortly after extractions were performed, the authors crosschecked the data to confirm their accuracy. Any discrepancies were resolved by mutual consent. Risk of bias in individual studies was assessed using the Cochrane risk of bias tool [13]. Studies were independently rated by the two authors and checked for selection bias, performance bias, detection bias, attrition bias, and reporting bias. Internal (intra-rater) consistency across items was checked before the results were combined into a spreadsheet for discussion. Any discrepancies between ratings were resolved by mutual consent.

Data is presented as mean ± standard deviation (SD) or 95% confidence interval (CI). All analyses were conducted using Comprehensive Meta-Analysis version 2 software (Biostat Inc., Englewood, NJ, USA). The level of significance was set at α < 0.05 and trends were declared at p = 0.05–0.10). Effect size (ES) values were calculated as standardized mean differences (difference between mean post-test scores divided by pooled SD) and expressed as Hedges’ g which corrects for parameter bias due to small sample size [14]. ESs were calculated from the pooled data for both intra- and inter-groups using a conservative random-effects model. An ES of 0.2 was considered a small effect, 0.5 a moderate effect, and 0.8 a large effect [15]. Between-study variability was examined for heterogeneity, using the I2 statistic for quantifying inconsistency [16]. The heterogeneity thresholds were set at I2 = 25% (low), I2 = 50% (moderate), and I2 = 75% (high) [16]. A funnel plot and rank correlations between effect estimates and their standard errors (SE), using Kendall’s τ statistic [17], were used to examine publication bias only when a significant result (p < 0.05) was found.

The database search yielded 8135 potential studies with the addition of five studies identified from reference lists and external sources (Figure 1). Five studies met the eligibility criteria and were included in the systematic review and meta-analysis [18,19,20,21,22]. There were a total of 96 participants (60 males and 36 females) aged 21–27 years (Table 1). Three studies included only male participants [18,21,22] while the other two studies had only female participants [19,20]. The majority of participants had an exercise background such as track and field [20] or regularly played sports [18,21,22]. Participants for one study were described as being previously sedentary [19]. The exercise interventions involved 3–4 supervised sessions performed over 4–6 weeks. High intensity interval training (cycling) was performed in one study [19], continuous cycling in three studies [18,21,22], and continuous treadmill exercise in one study [20].
All five studies assessed changes in body mass [18,19,20,21,22], two studies assessed changes in body fat [19,20], one study assessed changes in lean body mass [19], and one study assessed changes in fat-free mass [20]. Body fat percentage was assessed via a BodPod in one study [20] and dual-energy X-ray absorptiometry (DXA) in another study [19]. For the meta-analysis, data from lean body mass and fat-free mass was combined as it has previously been shown not to impact results [23].

5.2. Effect on Body Mass and Composition

Our review of a small number of studies does not support the use of fasted exercise for weight loss and positive changes in body composition. Futhermore, our findings also suggest there is no detrimental effect on body mass and body composition with utilizing this practice. Future research studies on this topic should use interventions of larger exercise volumes and durations to allow significant changes in weight loss and body composition. Also, for future-fasted versus fed exercise studies, the dietary habits of participants need to be well controlled. This could be achieved through prescribing participants specific diets and monitoring their compliance at regular time points throughout the intervention (e.g., three-day weighed food record or iPhone app). Acutely, fasted exercise has been shown to increase fat oxidation and the subsequent use of fatty acids as a fuel source, potentially inducing improvements in insulin sensitivity which may have important implications for type 2 diabetes and insulin-resistant patients [44]. Until further research on this topic is performed, it appears individuals can participate in whichever form of exercise that they prefer in either fasted or fed states when targeting improvements in body composition. 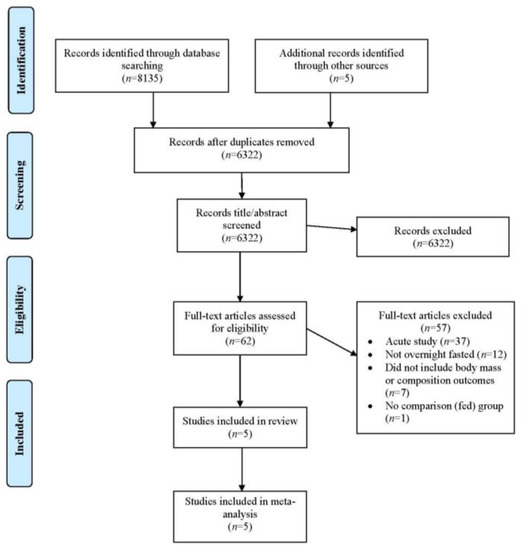 Table 3. Study risk of bias *.
Table 3. Study risk of bias *.
* Risk of bias in individual studies was assessed using the Cochrane risk of bias tool [13].
© 2017 by the authors. Licensee MDPI, Basel, Switzerland. This article is an open access article distributed under the terms and conditions of the Creative Commons Attribution (CC BY) license (http://creativecommons.org/licenses/by/4.0/).
We use cookies on our website to ensure you get the best experience. Read more about our cookies here.
Accept
We have just recently launched a new version of our website. Help us to further improve by taking part in this short 5 minute survey here. here.
Never show this again