Myoelectric Manifestations of Fatigue after ACL Reconstruction: A Cross-Sectional Study after Postoperative Rehabilitation

The Effect of Jet Lag on Postural Stability

Travelling by plane is an essential form of transportation given the number of individual and organizational demands related to business, education, medical treatment, tourism, sports, and others [1,2,3]. Unfortunately, people are negatively affected by intercontinental travel in several ways including jet lag [1]. “Jet lag is a syndrome caused by disruption of the ‘body clock’ and affects most air travelers crossing five or more time zones; it is worse on eastward than on westward flights” [4]. This body clock, or circadian clock, provides the body with information pertaining to sunlight or darkness and can cause physiological disruption if it does not reset quickly when crossing different time zones [5].
Jet lag is a syndrome that can affect human beings in many ways including physical performance [6,7]. The amount of time required to recover from the effects of jet lag is inconsistently reported in the literature. Weingarten and Collop reported that travelers require enough sleep, usually 7.5 to 8.5 h, before they return to normal [1,8]. Waterhouse et al. reported that travelers need a specific number of days to recover, determined by calculating two-thirds of the number of time zones crossed [9]. For example, if a person crosses nine time zones, 6 days will be required to recover fully. Conversely, Youngstedt and O’Connor reported whether flying westward or eastward, a day is recommended for each time zone crossed [10].
Researchers have investigated the effect of altered sleep cycles due to travel resulting in jet lag and correlations to decreased physical performance. According to Lemmer et al., after an eastward flight with six time zones crossed, swimmers reported that their swimming skills and their reactions were decreased [11]. They reported that these effects lasted 3 days for athletes travelling westward and 7 days for eastward flights. Other studies looked at the effect of jet lag on physical performance. Wright et al. reported that jet lag affected swimmers physical performance after an eastward flight as they lost strength in their arm and elbow flexion and other movements [12]. Reilly et al. stated that leg and back strength of British Olympic athletes was affected after a westward flight [13]. However, O’Connor et al. who reported no change in college swimmers after crossing four time zones [14]. Also, a study by Lagarde et al. of 27 American volunteers crossing seven time zones in an eastward direction looked at the effect of 300 mg caffeine and 5 mg melatonin and compared it with a placebo. Each participant was exposed to a static performance test (hand grip strength), maximal height test (squat jump test), and power and endurance test (multiple jump test). They reported decreased ability in the morning (during the static performance) in the first three sessions in the placebo group, increased ability (among the caffeine group while performing the static performance), and no change in physical performance in different occasions (all afternoon sessions for the static performance and in the non-dominant hands mornings and afternoons) [15].
Many Saudi Arabians travel to the United States for a variety of reasons. In 2012, 90,000 visas were given to Saudi Arabians visiting the United States by the United States Embassy in Saudi Arabia, also, approximately 82,500 Saudi Arabian students are enrolled in King Abdullah scholarship program [16]. There are approximately 111,000 Saudi Arabian students living in the United States [17]. There are twelve time zones between Riyadh, Saudi Arabia and Los Angeles, United States. Therefore, the objectives of this study were: (1) to assess changes in postural stability using the Stability Evaluation Test (SET) and Modified Clinical Test of Sensory Interaction on Balance (mCTSIB) in healthy young adult males after trans-meridian air travel between Saudi Arabia and the United States over time (within 24, 48 and 72 h); (2) to compare the effect of jet lag on postural stability between participants who did not get any sleep after arrival and those who slept prior to their 1st post-flight assessment over the three time intervals.

Twenty-two male participants, between 23 and 36 years of age, were recruited for the study. All participants were planning to travel to Saudi Arabia and return to the United States during school breaks. Inclusion criteria required having no balance impairments for any reason. Pre-flight assessment was performed prior to the individual participants’ flight to Saudi Arabia and post-flight assessments were taken on three consecutive days after their return to the United States (within 24, 48, and 72 h). All participants were assessed for their 1st post-flight visit during the first 24 h upon arriving back in the United States. Participants self-selected their groups. Eleven participants were assessed after post-flight sleep prior to their 1st post-flight assessment (Group 1) while eleven participants had their 1st post-flight assessments before getting any post-flight sleep (Group 2).
The Loma Linda University Institutional Review Board approved the study and participants signed a written informed consent prior to participation in the study. The NeuroCom® VSR™ SPORT CDP was used to measure participant’s postural stability. Two testing protocols were used, the mCTSIB and the SET (Figure 1 and Figure 2, respectively). Both protocols had been shown to be valid and reliable. A comparison study by El-Kashlan et al. between the CTSIB and the dynamic posturography (r ranged 0.41 and 0.89), which indicates that both tests are useful to work together to determine participants’ postural stability [18]. On the other hand, a study by Corvo et al. found the SET to be very helpful in measuring balance [19]. Also, Hanline and Olson found that the test-retest reliability for composite SET scores was greater than 0.80 in a pediatric population [20]. Both testing protocols measured postural stability as sway velocity in degrees per second across several different testing conditions. Participants were asked to stand still on the force plate. Testing conditions for the mCTSIB included eyes open on a stable surface for 30 s for three trials and then was repeated with eyes closed for 30 s for three trials. The same two conditions were then repeated on a foam surface with eyes open and with eyes closed. Testing conditions for the SET included eyes closed and hands on waist on a stable surface in double limb stance, followed by single limb stance, and finally tandem stance. Each test condition was performed once for 20 s. The same three conditions were then repeated on a foam surface. Authors were looking at the composite scores for these tests. Finally, participants were interviewed by the investigator and were asked various questions regarding their quality of travel during the flight (Table 1). Participants attended a total of four assessment sessions each lasting approximately 45 min.
Sample size was calculated using a medium effect size of .50 between participants in Group 1 and Group 2, a power of .80 and α = 0.05. The sample size needed was 50 participants. We were able to recruit 40 participants of whom 18 dropped throughout the study. Data analysis was completed on the remaining 22 participants with a power of 72 and an effect size of 45. Data was analyzed using SPSS version 22.0 for Windows. The characteristics of the participants were summarized using means and standard deviations for quantitative variables and frequency (%) for categorical variables. The normality of the variables was examined using the Kolmogorov-Smirnov test. Baseline characteristics of the two groups were compared using independent t-test or Mann-Whitney U test for quantitative variables and Fisher’s Chi-square test for qualitative variables. One way repeated measures analysis of variance (ANOVA) was used to assess changes in postural stability using SET and mCTSIB tests over time. To examine the effect of jet lag by group over time, a 2 × 4 mixed factorial analysis of variance (ANOVA) was conducted, after controlling for the duration of sleep on board. Pairwise comparisons were done using Bonferroni test. The level of significance was set at p ≤ 0.05.

In conclusion, travelling across more than 10 time zones westward did not have a significant impact on postural stability in healthy younger adults. Additionally, a potential learning effect was observed over 72 h as participants performed repeated balance testing.

The primary author would like to thank King Fahad Specialist Hospital-Dammam, Saudi Arabian Culture Mission, and Loma Linda University for sponsoring this project as a requirement for the Doctor of Science in Physical Therapy degree. 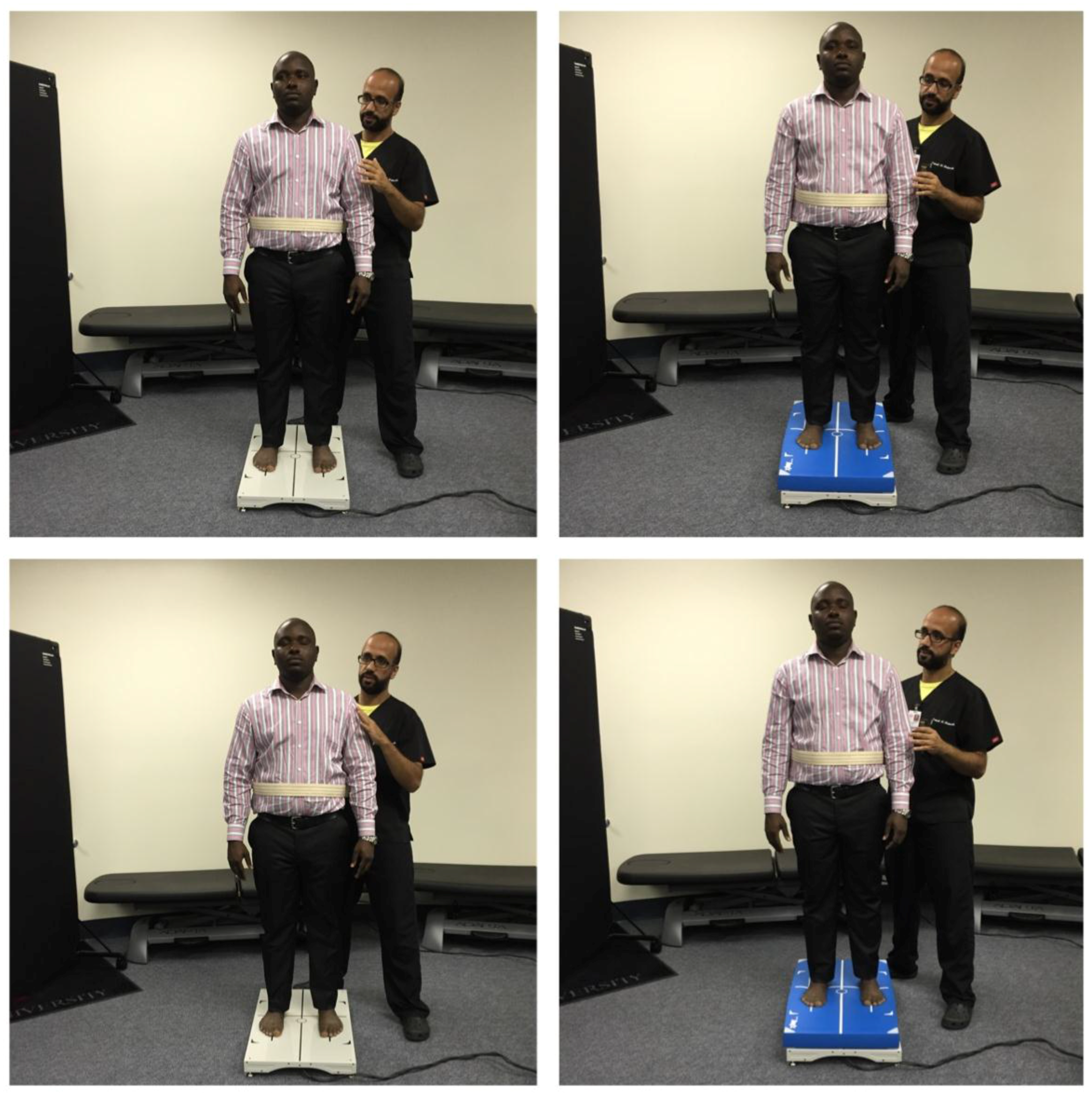