:
Magnetic vortex structures are of high technological relevance due to their possible application in magnetic memory. Moreover, investigating magnetization reversal via vortex formation is an important topic in basic research. Typically, such vortices are only investigated in homogeneous magnetic materials of diverse shapes. Here, we report for the first time on micromagnetic simulation of vortex formation in magnetic bow-tie nanostructures, comprising alternating parts from iron and permalloy, investigated for two different thicknesses and under different angles of the external magnetic field. While no vortex was found in pure permalloy square, nanoparticles of the dimensions investigated in this study and in case of iron only a relatively thick sample allowed for vortex formation, different numbers of vortices and antivortices were found in the bow-tie structures prepared from both materials, depending on the angular field orientation and the sample thickness. By stabilizing more than one vortex in a confined nanostructure, it is possible to store more than one bit of information in it. Our micromagnetic simulations reveal that such bi-material structures are highly relevant not only for basic research, but also for data storage applications.
Keywords:
magnetic nanostructures; micromagnetic simulation; bow-tie structure; vortex; magnetization reversal; iron, permalloy; lithography

Magnetic nanostructures can be produced with typical thicknesses of a few nanometers up to tens of nm and with lateral dimensions in the range of some 10 nm to several micrometers, applying lithographic techniques [1,2], pulsed electrodeposition [3] or self-assembly methods [4]. Such nanostructures are generally of high interest since the configurational anisotropy due to the shape of the nanoparticles can be in a similar order of magnitude as magneto-crystalline and magneto-elastic anisotropies, giving rise to new effects caused by the superposition of all these anisotropies [5,6,7,8].
Magnetic nano-dots were especially investigated by diverse research groups, since they often enable the formation of a vortex which can be used for data storage [9,10]. One advantage of such vortex states is the reduction of stray fields and thus of interactions with neighboring nanoparticles [11,12], although such interactions are not fully suppressed [13]. Flux-closed vortex states can be created in round, elliptical or square nano-rings without a core region, again reducing stray fields [14,15,16,17,18], while nano-dots of different shapes with a core region may enable formation of more magnetic states [19,20,21,22].
A former simulation of round iron (Fe) nanodots revealed nucleation of one or even two vortices during magnetization reversal, depending on the lateral dimensions of the nanodot and its thickness, but also several dimensions and aspect ratios in which no vortex state could be reached [23]. These vortices were often accompanied by antivortices, which are typically unstable and tend to annihilate at the edges of a nanostructure [24]. In square Fe nanodots, seven different magnetization reversal processes were found for different orientations of the external magnetic field, five of which contained one or more vortex states [25]. Similarly, dynamic simulations of rectangular nanostructures showed one or two resonance frequencies for different aspect ratios [26]. While square magnetic nanostructures of pure ferromagnetic or ferromagnetic/antiferromagnetic materials are sometimes reported in the literature [6,27,28,29,30], no investigations of bi-material square nanodots have been performed yet to the best of our knowledge.
Here, we report on square bow-tie structures (Figure 1), comprising alternating triangles of iron and permalloy (Py), which show unexpected vortex formation in comparison with square nanodots of both pure materials. Our micromagnetic simulations underline the new possibilities, which may be opened by such bi-material structures in basic research and technological applications. An overview of the possible production of such structures is given in Materials and Methods.

The nanoparticles under examination in this study are bow-tie structures, as depicted in Figure 1, consisting of Fe and Py parts. Lateral dimensions are 210 nm x 210 nm, the thickness is 15 nm or 30 nm. Such bow-tie structures are well known as electrodes [37].
There are two methods to produce bow-tie structures by electron beam lithography (EBL). The most common one starts with spin-coating a chip with PMMA resist. The PMMA is structured by EBL. After developing the resist (structures are cavities in the resist), metal is deposited on the substrate by sputtering or evaporation. Redundant metal and resist are removed by a lift-off process. An alternative is to metalize the chip firstly. Then structures are written by EBL and the resist is developed. Now the resist covers the structures and acts as an etch mask. Residual metal is dry etched and the resist is stripped. Bow tie structures remain, as visible in Figure 10.
To obtain bi-material bow tie structures, a so-called bilayer process is necessary, a well-known process for structures with edge lengths of several 100 nm. The alignment precision of the e-beam process is approx. 20 nm, thus with a designed gap of 50 nm between the materials, a gap in the range of 30–70 nm can be expected. Recently, the writing accuracy as well as the necessary gap between both materials are being optimized.
Our recent simulations concentrate on individual nano-elements, before in a future simulation arrays of these structures will be modeled. Recent simulations of iron nanoparticles revealed that for inter-particle distances similar to the particle diameters, the influence of interactions with neighboring particles is relatively small [38,39], so that simulating individual elements firstly can be expected to be sufficient for a first comparison with the experiment.
The angles of the external magnetic field were chosen as 30°, 45°, and 60°; the field is oriented in the plane of the nanostructure. As a comparison, pure Fe and Py nanoparticles of identical dimensions were modelled.
Simulations were performed with the micromagnetic simulator OOMMF (Object Oriented MicroMagnetic Framework) [40]. In this program, finite differences are used for meshing, and the Landau-Lifshitz-Gilbert (LLG) equation of motion is solved dynamically [41].
OOMMF offers the possibility to create bi-material maps in different ways, using the eXtensible Solver. Here, material regions were defined by an image file (Figure 1), using the function ImageAtlas. The material parameters for Fe (Py) were chosen according to typical literature values: magnetization at saturation MS,Fe = 1700 × 103 A/m (MS,Py = 796 × 103 A/m), exchange constant AFe = 21 × 10−12 J/m (APy = 10.5 × 10−12 J/m), magneto-crystalline anisotropy constant K1,Fe = 48 × 103 J/m3 (K1,Py = 0.5 × 103 J/m3). Along the borders, these values were averaged between the values of the single materials.
It should be mentioned that computing on graphical processing units (GPUs), e.g., with the free GPU-accelerated micromagnetic solver Mumax based on the Nvidia CUDA toolkit, can be used to reach higher performance and can be used for larger-scale, more detailed simulations [42].
The crystallographic orientations in the single parts of the mesh are chosen arbitrarily, as would be the case for a sputtered sample. This means that in each of the cubic “grains”, an arbitrary crystallographic orientation is chosen which varies with each new simulation, unlike the larger patches with well-defined differing crystallographic orientations used for simulations of amorphous ferrimagnets [43]. Opposite to the large magneto-crystalline anisotropy of cobalt which causes severe modifications from one simulation to the next for such an approach [1], here subsequent simulations showed approximately identical hysteresis loops which were dominated by the configurational anisotropy and not influenced by the arbitrary crystallographic orientation nor by the starting configuration. The material parameters are constant inside the “grains”, no special parameters are taken into account at the grain boundaries inside either material. A quasi-static case was modelled by setting the Gilbert damping constant α = 0.5 for both materials, the mesh size was chosen as 3 nm3 for the whole sample. Simulations were typically performed in the range between ± 200 mT in steps of 0.4 mT; if minor loops were found, the field ranges were correspondingly increased to investigate proper full hysteresis loops. All simulations are started from a fully saturated state of the magnetization along the corresponding angle.

Square magnetic bow-tie nanostructures, comprised of iron and permalloy, were investigated by micromagnetic simulations for the first time. Depending on the orientation with respect to the external magnetic field and on the sample thickness, in most cases two or four vortices were found, while the typical single-vortex state which is often visible in round or square nanodots of different materials and dimensions was fully suppressed by the bi-material structure. These findings underline the opportunities given by such bi-material nanostructures in data storage and transport, allowing for storing more than one bit of information in a nanoparticle which contains more than one separately controllable vortex.
Next, preparation of such bow-tie bi-material structures by e-beam lithography will be optimized, and experimental investigations of the nanostructures will be compared with the simulated results. Finally, simulations and experimental verifications are necessary to evaluate possibilities to influence the vortices solely, in this way enabling storage of more than one bit of information in such a magnetic nanoparticle.

This work was supported by Volkswagen Foundation grant “Adaptive Computing with Electrospun Nanofiber Networks” no. 93679 and the internal PhD funds of Bielefeld University of Applied Sciences. The APC is funded by the Open Access Publication Fund of Bielefeld University of Applied Sciences and the Deutsche Forschungsgemeinschaft (DFG, German Research Foundation)–414001623. 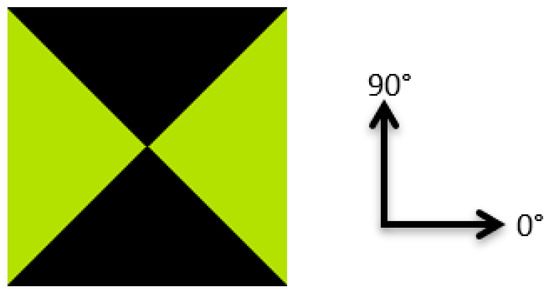 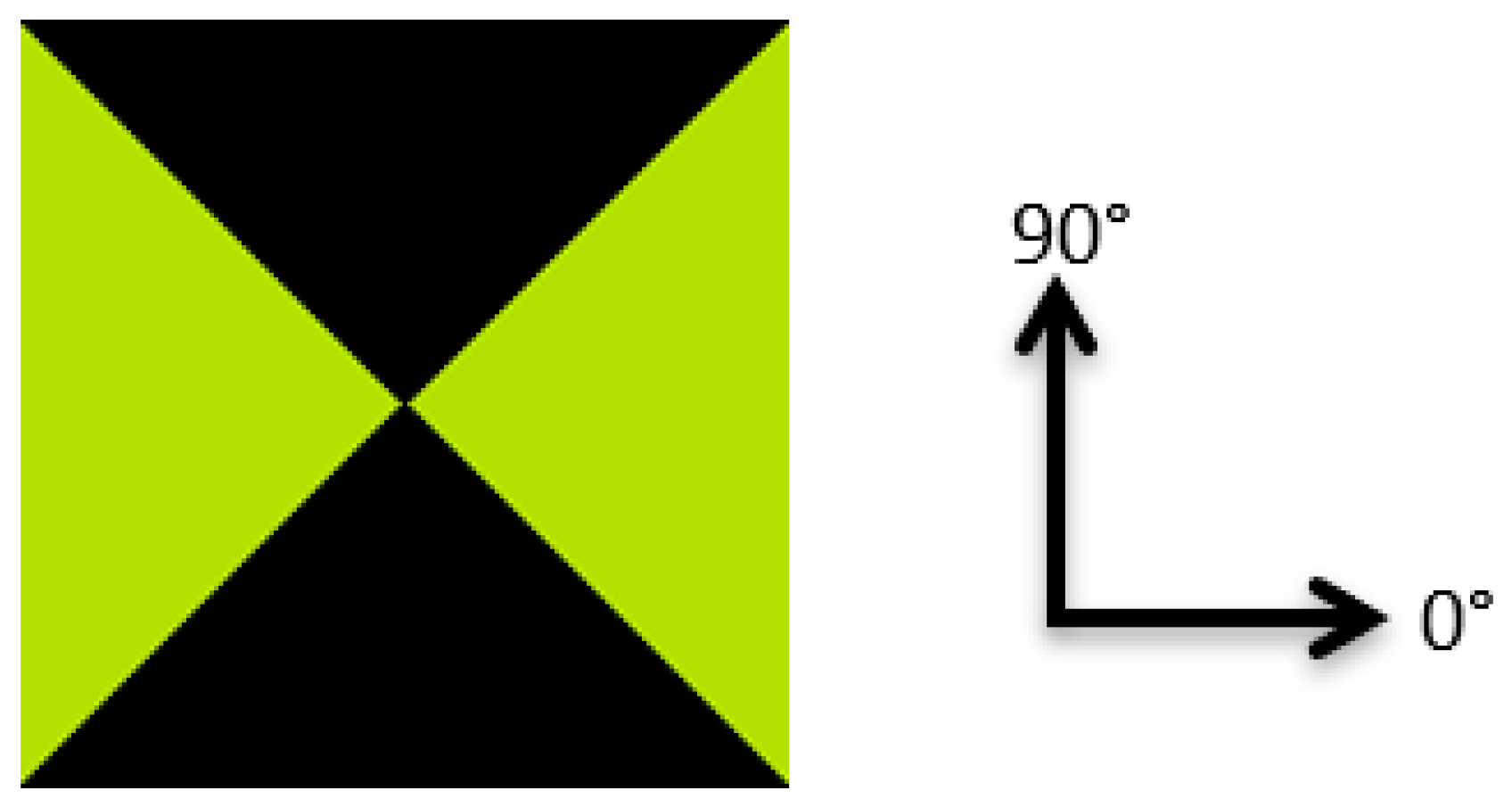 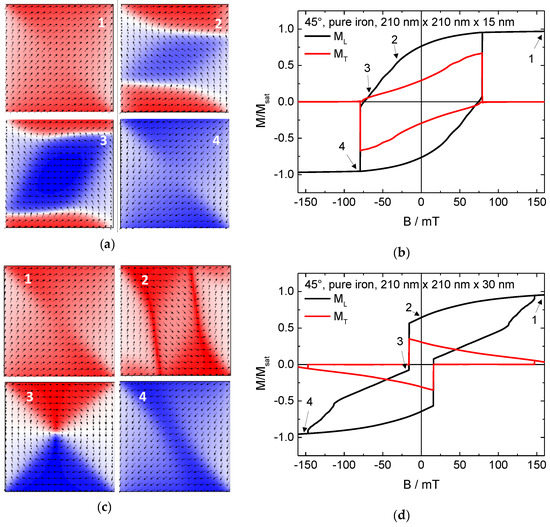 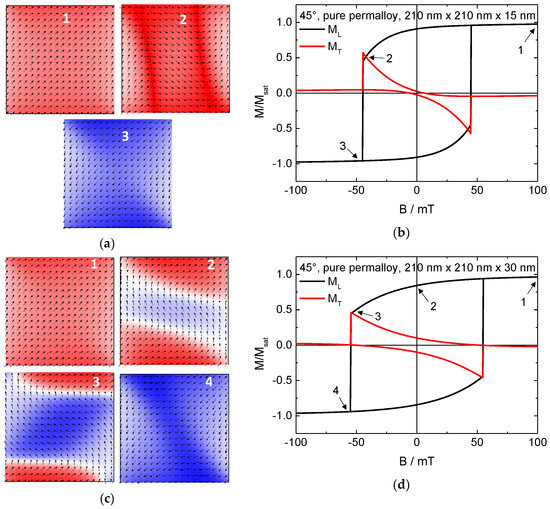