VO2 is a transition metal oxide in which complex electronic phases appear near the metal-to-insulator transition due to electron correlation and electron–lattice interactions. This system is characterized by a metal-to-insulator transition (MIT) at around 341 K. The metal (high T) phase is tetragonal while the insulator (low T) phase is monoclinic and the resistivity changes at the MIT by about five orders of magnitude. Here, we report investigations of the MIT in a thin VO2 film deposited on a sapphire substrate showing hysteresis. The MIT has been characterized by resistance measurements versus temperature and a DC magnetic field. The thin sample shows different final resistance values in both the insulating and metallic state after different temperature cycles. Moreover, some cycles do not close in the insulating phase. An unexpected magnetic dependence of the temperature cycle in the sample was also observed. The results show that the MIT of VO2 can be controlled by reducing the thickness below 40 nm in micron-sized ribbons since MIT is associated with the emergence of coexisting metastable conformations controlled by the thickness-dependent misfit strain and stress distributions induced by the mismatch between thin ribbon film and the substrate. View Full-Text
Keywords: VO2 oxide; strain in thin layer and interface; metal–semiconductor interfaces VO2 oxide; strain in thin layer and interface; metal–semiconductor interfaces
►▼ Show Figures 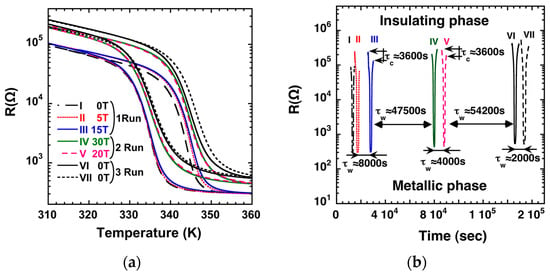