Increasing Abundance of Silky Sharks in the Eastern Indian Ocean: Good News or a Reason to be Cautious?

The silky shark (Carcharhinus falciformis) is the most common shark landed in Indonesian waters, including in the Indian Ocean. However, even though they are frequently caught, there is a lack of information on the population and abundance of silky sharks in the Indian Ocean. Cilacap and Tanjung Luar are two of Indonesia’s shark fishery hotspots, both located on the edge of the Indian Ocean, which is a part of the Indonesian Fisheries Management Area (FMA) 573. The fishers from both places usually have fishing grounds in that particular fisheries management area. This research aims to update the abundance, and to investigate the factors, which influence catches of silky shark in the FMA 573 based on monthly enumeration during 2015–2016. This study found that standardized catch-per-unit-effort (CPUE) or abundance indices of silky shark in the Indonesian FMA 573 increased from 2015 to 2016. We suggested that fish immigration and decreasing fishing pressure may affect the fish abundance. Fisheries management is required to regulate the fishing pressure, such as controlling the number of boats/licenses and the number of trips or fishing gear, as well as initializing spatial and temporal fishing closure. View Full-Text
Keywords: shark fisheries management; sharks immigration; fishing pressure; GLM; abundance indices; standardized CPUE shark fisheries management; sharks immigration; fishing pressure; GLM; abundance indices; standardized CPUE
►▼ Show Figures 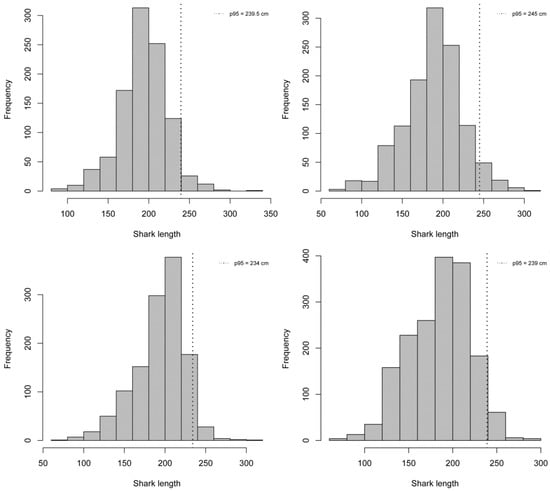