Secure booting within a field-programmable gate array (FPGA) environment is traditionally implemented using hardwired embedded cryptographic primitives and non-volatile memory (NVM)-based keys, whereby an encrypted bitstream is decrypted as it is loaded from an external storage medium, e.g., Flash memory. A novel technique is proposed in this paper that self-authenticates an unencrypted FPGA configuration bitstream loaded into the FPGA during the start-up. The internal configuration access port (ICAP) interface is accessed to read out configuration information of the unencrypted bitstream, which is then used as input to a secure hash function SHA-3 to generate a digest. In contrast to conventional authentication, where the digest is computed and compared with a second pre-computed value, we use the digest as a challenge to a hardware-embedded delay physical unclonable function (PUF) called HELP. The delays of the paths sensitized by the challenges are used to generate a decryption key using the HELP algorithm. The decryption key is used in the second stage of the boot process to decrypt the operating system (OS) and applications. It follows that any type of malicious tampering with the unencrypted bitstream changes the challenges and the corresponding decryption key, resulting in key regeneration failure. A ring oscillator is used as a clock to make the process autonomous (and unstoppable), and a novel on-chip time-to-digital-converter is used to measure path delays, making the proposed boot process completely self-contained, i.e., implemented entirely within the re-configurable fabric and without utilizing any vendor-specific FPGA features. View Full-Text
Keywords: secure boot; Physical Unclonable Function; FPGAs secure boot; Physical Unclonable Function; FPGAs
►▼ Show Figures 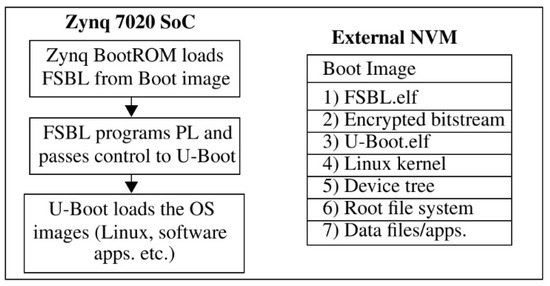