The VISTA Approach in Canine Disimpaction

One of the greatest challenges to the development and implementation of pregnancy therapeutics is the ability to rigorously test treatments in clinically relevant animal models. Guinea pigs offer a unique advantage in studying the placenta, fetal development, and reproductive health as they have similar developmental milestones to humans, both throughout gestation and following birth. Tracking the guinea pig estrus cycle is imperative to ensuring appropriately timed mating and can be performed by monitoring the guinea pig vaginal membrane. Here, we describe a methodology to efficiently and accurately time mate guinea pigs, and provide a picture representation of changes to the guinea pig vaginal membrane throughout the estrus cycle. Utilization of this monitoring enabled a 100% pregnancy success rate on the first mating attempt in a cohort of five guinea pigs. This approach, along with early pregnancy ultrasounds as a secondary method to confirm pregnancy, offers a reliable approach to timed mating in the guinea pig.
Keywords: guinea pig; pregnancy; time mate; methodology; reproduction guinea pig; pregnancy; time mate; methodology; reproduction

The placenta is a transient organ, unique to pregnancy which functions to support the passage of oxygen and nutrients to the developing fetus and maintain adaptation of the maternal environment to pregnancy [1], without it, there is no pregnancy. Inappropriate placental development and function is associated with numerous obstetric complications which affect one in four pregnancies worldwide [2]. Conditions such as preeclampsia, stillbirth, and preterm birth contribute significantly to both maternal and neonatal morbidity and mortality. As such, there is a heightened need to continue to develop robust predictive models, diagnostic techniques, and potential therapies for use during pregnancy. However, studying and utilizing pregnant women is considered high risk and consequently, most pregnancy research utilizes animal models from small rodent species to larger mammals such as sheep.
The usefulness of the guinea pig in pregnancy research is often overlooked and more readily performed in mice due to their shorter gestation, lower costs, and more rapid advancement of transgenic model development. However, guinea pigs have smaller litters and deliver precocial young (they are born fully-furred with well-developed sensory and locomotory abilities) [3]. Furthermore, guinea pigs have some similar developmental milestones to humans both throughout gestation and following birth [3,4]. This includes significant fetal fat deposition in late pregnancy [5] and comparable biochemical and morphological development of fetal organs including lungs [6], kidneys [7], and the cardiovascular system [8]. Unlike rats and mice, the type of placenta in the guinea pig reflects the human as they have a haemomonochorial placental barrier: a single syncytiotrophoblast layer separates the maternal blood space from the fetal vessels [9]. Placental establishment is also more similar to humans, with guinea pigs exhibiting deeper placental trophoblast invasion than mice [10] and changes to the maternal hormonal profile throughout pregnancy more closely resembles changes in humans when compared to other rodent species [11]. Altogether, these outcomes make utilizing the guinea pig in pregnancy research superior, particularly for the advancement of understanding the potential mechanisms underlying poor obstetrical outcomes. This knowledge can then be used to facilitate the development of potential therapies to treat obstetrical complications that significantly contribute to long-term morbidity and mortality for mother and child.
One of the principal challenges associated with using guinea pigs for reproductive discoveries is the ability to time their matings. Guinea pigs have an approximately 16-day estrus cycle [12] and 65–70 day gestation [13]. Unlike other rodent species, the formation of a copulatory plug by male guinea pigs after intercourse is debated [14] and as such, it is difficult to ascertain when mating has occurred in order to track pregnancy progression. Some have described methods in which time mating guinea pigs is achieved by allowing females to carry a pregnancy and then breed in 24 h immediately after birth [15]. Others simply allow a time range of plus/minus 1 week based on the length at which the female is housed with the male [16]. However, these methodologies introduce significant variability (mean fetal weight increases from 2.5 ± 0.31 g at GD33 to 12.0 ± 0.77 g at GD39; R. Wilson unpublished) and time which ultimately increases costs associated with performing experiments with guinea pigs. Similar to other rodents, guinea pigs have a four-stage estrus cycle: Estrus, metestrus, diestrus, and proestrus [12]. Estrogen is the dominant hormone during the estrus period and occurs during ovulation, whilst progesterone dominates the diestrus period [17]. All the stages of the estrus cycle can be monitored through vaginal cytological smears. However, these can be time consuming and require experience in understanding the technique. Vaginal impedance can also be used to monitor estrus cycles progression [18], but is also another technique that requires specialized tools. Monitoring changes in the vaginal membrane, which perforates spontaneously at estrus is an easy method to achieve time mated guinea pigs, first described in [14,19]. Herein, we describe this methodology in a simple to follow protocol with photographic evidence of the changes to the vagina membrane, as well as highlight the use of ultrasound in early pregnancy (gestational day 21–30) to definitively confirm the pregnancy.

Through monitoring changes to the vaginal membrane, we achieved a 100% pregnancy success rate with first time mating of five female guinea pigs. During the latent period of the estrus cycle, the vaginal membrane will appear as a pale color and visibly closed (Figure 1A,B). In the 4–5 days prior to ovulation, the vagina will undergo noticeable changes in color, becoming progressively darker pink, mild swelling of the vulva can also be noted prior to perforation (Figure 1C). Full perforation of the vagina happens within 24–72 h and is noticeable as a complete opening of the vagina, often associated with increased vaginal secretions/mucous (Figure 1D). The vaginal membrane then closes within 48–72 h of full perforation (Figure 1E,F). Based on these observations, we confirmed the guinea pig estrus cycle to be 15–16 days (n = 4 out of five female guinea pigs) with observations of initial perforation through to closing of the vaginal membrane lasting between 3–6 days (Figure 2). This was the exception for one female whose vaginal membrane remained perforated for approximately 2 weeks after initially being observed as open. Despite this, she was still placed with a male as described in Section 3.
Whilst it is relatively easy to observe the estrus cycle of the guinea pig by monitoring the vaginal membrane, determining a successful pregnancy is more difficult. Guinea pigs carry weight around their abdomens making visual observations of pregnancy practically impossible until after gestational day 40. Furthermore, noticeable increases in maternal weight, that would suggest a pregnancy, do not occur until after mid-pregnancy and can vary depending on the litter size (Figure 3). Some have described methods of gently palpating the maternal abdomen as early as gestational day 15 to feel for conceptuses [21]. However, we have not been successful in using this methodology. Daily monitoring for vaginal membrane perforation after the female has been with the male and assumed pregnant is also not a viable technique. As our data shows, we have observed spontaneous perforation in the vaginal membrane after a successful mating in two out of the five pregnant animals (Figure 2, animal #3 and #5). This phenomenon has previously been described, with the original hypothesis that opening of the membrane during pregnancy was associated with fetal loss [22]. However, further studies concluded that perforation of the membrane during pregnancy was a natural process unique to the guinea pig and possibly driven by changes in estrogen and progesterone [17]. Our experience supports this conclusion as early pregnancy ultrasounds showed no evidence of fetal resorptions in the animals whose vaginal membranes perforated during pregnancy. In our experience, an ultrasound is the only definitive method for determining a pregnancy prior to gestational day 30 (Figure 4), but is limited to not being accurate before gestational day 21.
Integral to reproductive research is the ability to time mate animals in order to monitor and collect data at similar points throughout gestation. In this paper, we report an easy and reliable method of time mating guinea pigs through daily monitoring of the vaginal membrane. A significant advantage of the method is that this mating strategy can be performed by a single researcher and does not require overly specialized tools or equipment as well as negates the need to perform daily, time-consuming smears in order to track the estrus cycle. Coupled with an ultrasound as a secondary method to confirm the pregnancy, we have shown that through familiarizing ourselves with the changes that occur to the vaginal membrane, we can achieve a 100% successful pregnancy rate in a matter of weeks, which ultimately reduces the overall costs associated with animal husbandry and increases research success.

Data can be provided on request by the corresponding author. 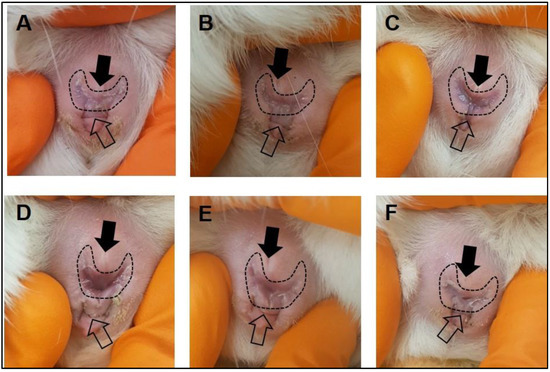 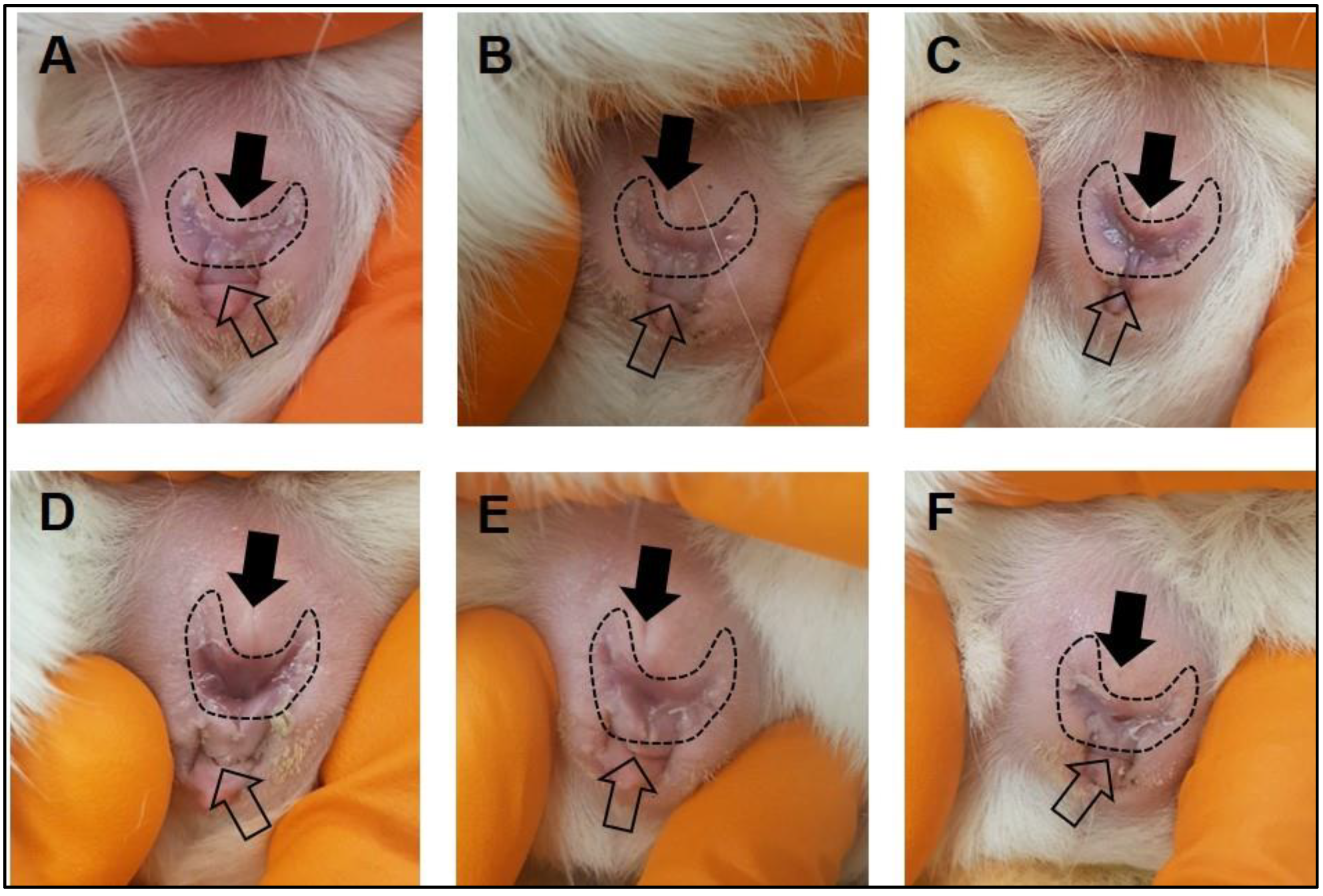