Family Attitudes regarding Newborn Screening for Krabbe Disease: Results from a Survey of Leukodystrophy Registries
Previous Article in Journal

Achieving Congruence among Reference Laboratories for Absolute Abundance Measurement of Analytes for Rare Diseases: Psychosine for Diagnosis and Prognosis of Krabbe Disease

Measurement of the absolute concentration of the biomarker psychosine in dried blood spots (DBS) is useful for diagnosis and prognosis of Krabbe disease and to support newborn screening of this leukodystrophy. As for assays for more common diseases, it is important to achieve congruence when multiple clinical laboratories provide testing. Four clinical laboratories, one research laboratory, and a commercial vendor collaborated with the goal to achieve congruence in quantitative psychosine measurement in DBS. A set of DBS calibrators was prepared by a single vendor and used in each reference laboratory to make a standard curve of measured psychosine in DBS versus the stated calibrator psychosine level. Congruence between the participating five laboratories was achieved using the psychosine DBS calibrators. This allowed application of disease-specific reference ranges obtained by the reference laboratory with the most extensive data by the other reference laboratories. Congruence between multiple reference laboratories in the measurement of the absolute concentration of biomarkers in DBS (and by extension other samples) is possible by the use of a common set of DBS calibrators.
Keywords: newborn screening; biomarkers; mass spectrometry; Krabbe disease newborn screening; biomarkers; mass spectrometry; Krabbe disease

Venous blood (~100 mL) was collected from a single healthy adult into heparanized tubes, and the hematocrit was determined in the usual way by centrifugation of a 5 mL aliquot. The hematocrit was found to be 50% and was not adjusted. Certified stock solutions (qNMR) of d0- and d5-psychosine were obtained from Avanti Polar Lipids (Alabaster, AL, ce, Alabaster, AL, USA). Stock solutions of d0-psychosine were serially diluted into reagent grade methanol using glass syringes (Hamilton, Reno, NV, USA), such that each syringe was filled by more than 30% of its capacity to minimize errors. Final stock solutions of 0.1, 0.2, 0.5, 1.0, 2.5, 5.0 and 10.0 μM analyte were prepared fresh before use.
Aliquots of heparinized whole blood (11.88 mL delivered with a 1000 μL pipette, were placed into glass vials, each equipped with a magnetic stir bar. With vigorous and continuous stirring, 0.12 mL of methanol stock solution of d0-psychosine was added to give the desired target psychosine concentration (0, 1, 2, 5, 10, 25, 50, and 100 nM). The methanol was added over ~30 sec with a Hamilton glass syringe, with the needle tip inserted into the blood. Using a 0.5 mL repeater pipet, 0.5 mL of blood was taken up, and 0.05 mL aliquots were delivered to each filter paper card (Whatmann 10534612 903 Protein Saver Cards from Millipore Sigma (St. Louis, MO, USA) to make 8 blood spots (the first and last 0.05 mL aliquot was delivered to the vial of blood rather than to the filter paper). The process was repeated until most of the blood was spotted. The cards were allowed to dry at room temperature for 2 h and then stored at −20 °C in glass jars with calcium sulfate desiccant. d0-Psychosine was measured in 3 mm punches from the DBS calibrators by LC-MS/MS, as described using qNMR-certified d5-psychosine as internal standard [2], to provide the standard curve in Figure 2 from the vendor.

After much deliberation, it was decided to take the following approach to best ensure congruence between psychosine values across all participating laboratories. Human blood from a single donor was spiked with known amounts of non-deuterated psychosine from a stock solution made from qNMR-certified material. Spiked psychosine values of 0, 1, 2, 5, 10, 25, 50, and 100 nM were used in order to cover the range of psychosine values measured in control and patient DBS. DBS calibrators were created by spotting spiked blood onto standard 903-grade filter paper. These DBS calibrators were made by a single vendor (see Section 2) and supplied to the participating laboratories for use as calibrators. Each laboratory measured the amount of psychosine in each calibrator DBS using the LC-MS/MS method and stock solution of deuterated psychosine (as internal standard) of their choice. Each laboratory then made a standard curve with measured psychosine on the y-axis and quality control psychosine (as stated by the manufacturer) on the x-axis. The set of these standard curves from the four clinical laboratories, the research laboratory as well as from the vendor are shown together in Figure 2. It can be seen that the slopes of these standard curves are different in each laboratory, which underscores the lack of congruence noted above. However, this is presumably of no concern since each laboratory pledges to use its own standard curve to determine the psychosine concentrations in patient samples. In this way, even though each of the four laboratories will obtain different assay responses on an identical test sample, they will all report the same psychosine values based on their own standard curve made from the same calibrators. Furthermore, each laboratory includes at least a subset of these DBS calibrators each time they measure psychosine in a set of new patient samples. In this way, any drifts in the analysis, for example a change in RRF, will be accounted for.
This approach requires that the true amount of psychosine in the calibrators does not change during storage of the calibrators. In a previous study, it was found that psychosine was stable in freezer-stored DBS for up to 6 months [3], and thus it was decided that an expiration date of 3 months be placed on the calibrators until the extended stability has been determined. It was also decided that when the manufacturer makes a new lot of calibrators, that they be checked side-by-side with the previous lot. Any differences will be assumed to be due to different absolute amounts of psychosine added to the new lot versus the old lot (this makes the reasonable assumption that RRF does not change between samples run on the same day). The new lot will be calibrated to the old lot. For example, if the newly made putative 1 nM psychosine DBS standard reads 10% higher by LC-MS/MS than the 1 nM standard in the original lot tested at the same time, the new lot will be specified as a 1.1 nM calibrator. The manufacturer also agreed that when making a new lot of calibrators, both deuterated and non-deuterated psychosine standards that have been certified by qNMR will be used. This will presumably lead to a minimal change in the measured calibrator level of the new lot compared to that of the original lot, and thus, the updated calibrator levels will be very close to those of the original lot. This approach does not guarantee against a slow and systematic drift in calibrator levels over a long period of time, and going forward, it will be important to monitor the lot-to-lot variation over several lots. Hopefully, any changes will be slight and not systematically in one direction.
By using this common set of psychosine DBS calibrators, it is possible for the laboratories with limited access to patient specimens to adopt the reference ranges from the laboratory with the most extensively studied reference ranges [8]. As noted above, this is essential in the case of Krabbe disease where the number of specimens from affected patients is very limited, especially when considering different degrees of disease severity.

The work in the M.H.G. laboratory was funded by a grant from the National Institutes of Health (R01 DK067859).

M.H.G. is a consultant for PerkinElmer, Corp. and a co-founder of GelbChem LLC, the other authors declare no conflicts of interest. 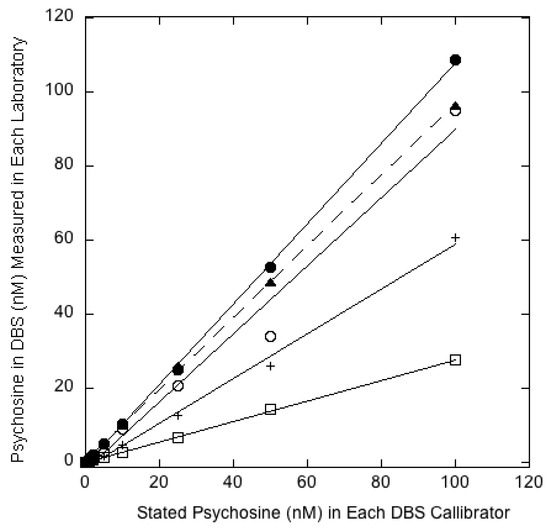 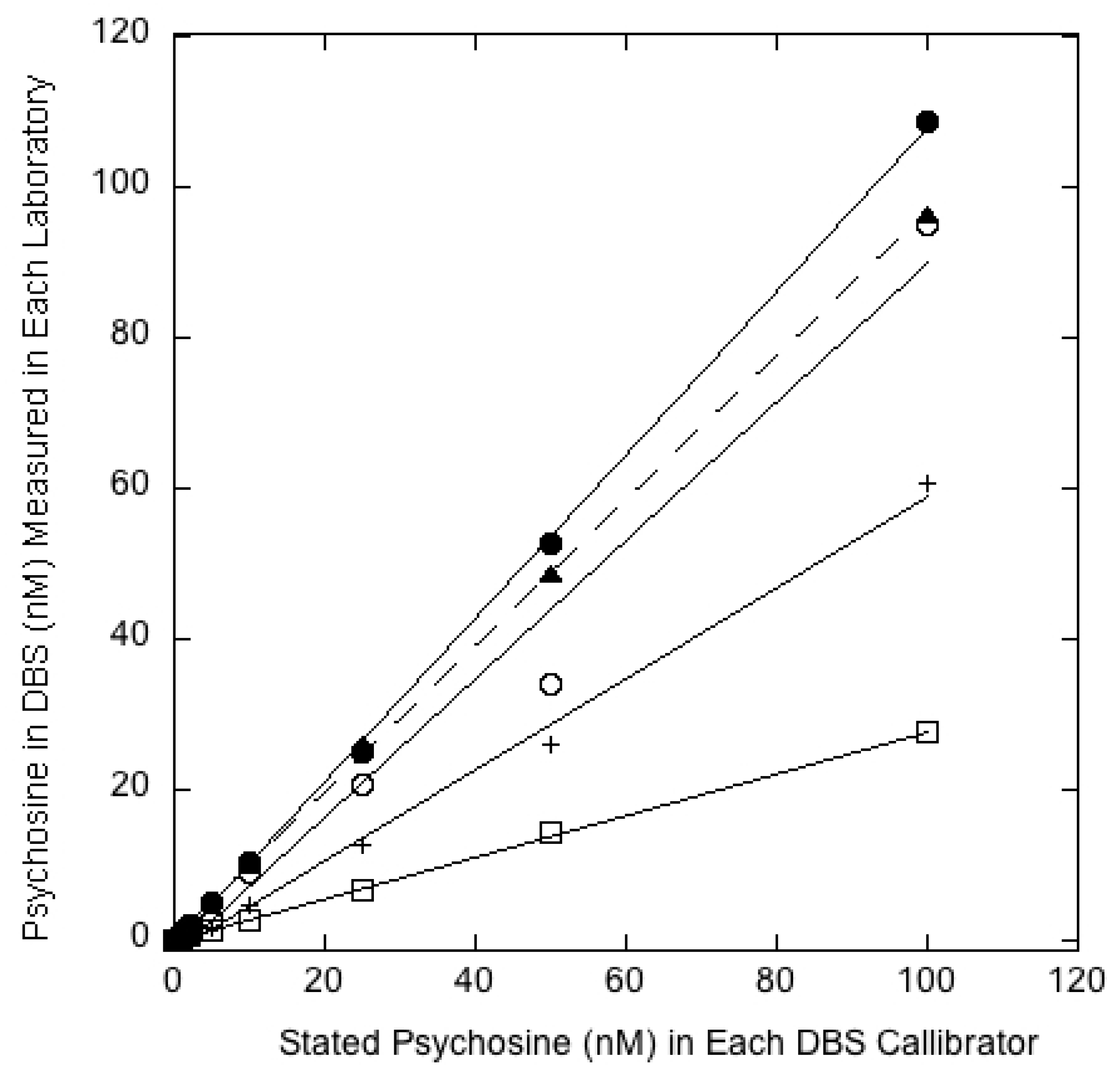