Heart failure (HF) with preserved left ventricular ejection fraction (LVEF) is a heterogeneous syndrome. An LVEF of 50% is widely used to categorize patients with HF; however, this is controversial. Previously, we have reported that patients with an LVEF of ≥ 58% have good prognoses. Further, cardiac sympathetic nervous system (SNS) activation is a feature of HF. In this retrospective, observational study, the cardiac SNS activity of HF patients (n = 63, age: 78.4 ± 9.6 years; male 49.2%) with LVEF ≥ 58% (n = 15) and LVEF < 58% (n = 48) were compared using 123I-metaiodobenzylguanidine scintigraphy. During the follow-up period (median, 3.0 years), 18 all-cause deaths occurred. The delayed heart/mediastinum (H/M) ratio was significantly higher in the LVEF ≥ 58% group than in the LVEF < 58% group (2.1 ± 0.3 vs. 1.7 ± 0.4, p = 0.004), and all-cause mortality was significantly lower in patients in the former than those in the latter group (log-rank, p = 0.04). However, when these patients were divided into LVEF ≥ 50% (n = 22) and LVEF < 50% (n = 41) groups, no significant differences were found in the delayed H/M ratio, and the all-cause mortality did not differ between the groups (log-rank, p = 0.09). In conclusion, an LVEF of 58% is suitable for reclassifying patients with HF according to cardiac SNS activity. View Full-Text
Keywords: cardiac sympathetic nervous system; heart failure; left ventricular ejection fraction; metaiodobenzylguanidine; mortality cardiac sympathetic nervous system; heart failure; left ventricular ejection fraction; metaiodobenzylguanidine; mortality
►▼ Show Figures 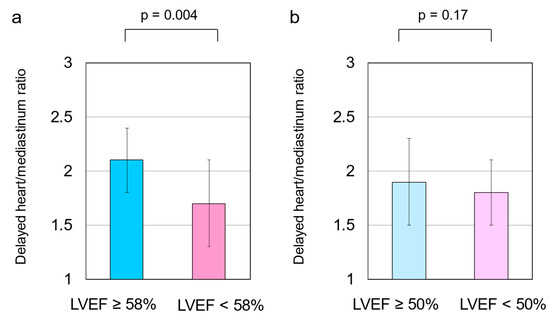