Dynamic Contrast Enhanced Study in Multiparametric Examination of the Prostate—Can We Make Better Use of It?
Previous Article in Journal

Cognitive impairment in cancer patients can be caused by various factors; in approximately 30% of cancer patients, the symptoms appear before starting treatment. Paraneoplastic limbic encephalitis (PLE) is a rare disease associated with an autoimmune response, and is characterized by memory loss, depression, and personality changes; it is one of the potential causes of cognitive dysfunction in cancer patients. Two patients were previously diagnosed with mild cognitive impairment and maintained clinical stability; after suffering a rapid change in personality and sudden cognitive decline, colorectal cancer was diagnosed within a few months. The patients did not meet the diagnostic criteria for PLE in several tests. The symptoms improved after the underlying cancer was treated, and the patients returned to their previous stable state. Sudden cognitive impairment may appear as an early cancer symptom, and PLE is considered an atypical cause for these symptoms. However, in patients with unexplained PLE-like symptoms who do not meet the diagnostic criteria for PLE, probable etiologies to be considered are the gut–brain connection, CD8+ T-cell-mediated limbic encephalitis, and somatic mutations in dementia-related genes. Currently, few studies have investigated these symptoms, and further research will offer significant therapeutic strategies for cognitive impairment in cancer patients.
Keywords: CD8-positive T-lymphocytes; colorectal neoplasms; gastrointestinal microbiome; limbic encephalitis CD8-positive T-lymphocytes; colorectal neoplasms; gastrointestinal microbiome; limbic encephalitis

Cognitive impairment is a symptom commonly observed in cancer patients. Even when not severe, it is important to accurately diagnose it and manage its causes, because it can affect social relationships, treatment intention, and quality of life. Various factors can cause cognitive impairment in these patients: direct brain lesions, such as brain metastasis of primary cancer; chemotherapy; opioid analgesic administration; head and neck radiation therapy; side effects of immunotherapy (e.g., steroids); and metabolic abnormalities accompanying the patient’s general condition [1]. Although cognitive impairment owing to a paraneoplastic syndrome is not frequent, it should be considered an important cause in the case of cognitive impairment in cancer patients.
Paraneoplastic limbic encephalitis (PLE) is a disease that occurs when tumor-derived autoantibodies, such as anti-Hu, anti-Yo, anti-Ma2, and anti-N-methyl D-aspartate (NMDA) receptor (anti-NMDAR), affect the limbic system. It is characterized by cognitive and behavioral symptoms, including memory loss, personality change, emotional irritability, and dementia [2]. Almost 80% of the neurological disorders caused by this paraneoplastic syndrome manifest symptoms before the cancer is diagnosed [3]. Since PLE patients have a rapid decline in memory and cognitive abilities, usually within three months, a differential diagnosis of rapidly progressive dementia must be considered. The prognosis is generally poor, and is related to the type of autoantibody, the patient’s comorbidities, and the cancer stage [3].
We present two cases of patients with mild cognitive impairment, who were stable for several years, showed sudden cognitive decline and rapid personality changes, and were diagnosed with cancer shortly after. Both patients showed PLE-like symptoms; however, their disease progression was different from general cancer-related cognitive impairment; therefore, we report these cases with a literature review.

A 68-year-old man visited our hospital complaining of sudden cognitive decline, extreme depression, and intermittent increases in violence, which had started two months prior. At the time of admission, the patient could not determine the current year and season and had recently developed an unwillingness to wash, despite being usually clean. There were no underlying diseases such as hypertension or diabetes. He had been diagnosed with mild cognitive impairment four years before; however, he had previously obtained a score of 21 or higher in the annual Korean Mini Mental-Status Examination (K-MMSE), showing that his memory and cognitive functions were sufficiently maintained. When he visited the hospital, his K-MMSE score was 8, a sharp decrease from 22 the previous year. During the Seoul Neuropsychological Screening Battery (SNSB) test, abnormal behaviors were reported, such as irritability and anger, and a deterioration in memory, attention, spatiotemporal ability, and frontal/executive function. There were no specific findings on brain magnetic resonance imaging (MRI). The cerebrospinal fluid (CSF) was clear, with a pressure of 14 cmH2O, a white blood cell count of 3/mm3, a glucose level of 68.0 mg/dL, and a slightly elevated protein level of 79.1 mg/dL. No specific abnormalities were observed in the CSF cytology examination. The blood chemistry test showed a leukocyte count of 7610/mm3, a Na+ level of 133 mEq/L, and a K+ level of 4.4 mEq/L, suggesting no metabolic abnormalities. The thyroid function test showed a TSH level of 1.564 uIU/mL, and a Free T4 level of 14.86 pmol/L, showing no hormonal abnormalities.
Medication was administered to control the symptoms, without significant improvement. Two months after symptom onset, the patient was diagnosed with rectal cancer on an abdominal computed tomography (CT) performed for fecal blood and weight loss. A histological examination revealed moderately differentiated adenocarcinoma, staged as T3 N0, stage IIA. The patient underwent preoperative concomitant chemoradiation therapy, and antimetabolite-type capecitabine was administered for six weeks. Simultaneously, whole-pelvis intensity-modulated radiation therapy was performed; eight weeks later, he underwent laparoscopic ultra-low anterior resection. All the serological analysis results for paraneoplastic antibodies were negative. After surgery and chemotherapy, his K-MMSE score was 23, showing improved cognitive functions, and his recent symptoms resolved, returning to his previous stable status. Currently, no recurrence is observed on the colonoscopy.

An 82-year-old man, previously healthy and active, visited the hospital with a sudden decrease in cognitive function, and aggression, which had started several weeks before his visit. Before these symptoms, he worked in an office, and despite his old age, he was thorough and meticulous in managing his schedule. However, at the time of his visit, he could not remember important appointments, was violent, and frequently quarreled with others. The patient had no other relevant findings. The K-MMSE score at admission was 13, a considerable drop from 26 only four months prior. At the time of the SNSB examination, the patient was not cooperative; however, despite the limitations in obtaining accurate results, he showed alterations in memory, attention, concentration, frontal lobe functions, and executive functions. A brain MRI and electroencephalography (EEG) did not reveal any abnormalities. The CSF was clear, with a pressure of 12 cmH2O, a WBC count of 0/mm3, a glucose level of 61.0 mg/dL, and a slightly elevated protein level of 74.0 mg/dL. No specific abnormalities were observed in the CSF cytology examination. The blood chemistry test showed a leukocyte count of 5420/mm3, a Na+ level of 138 mEq/L, and a K+ level of 4.27 mEq/L, showing no metabolic abnormalities. The thyroid function test showed a TSH level of 1.142 uIU/mL, and a Free T4 level of 13.24 pmol/L, showing no hormonal abnormalities.
Medication was administered to control the symptoms, without significant improvement. An abdominal CT was performed four months after symptom onset due to melena, and an ascending colon tumor with lymph node metastasis was noted. After a laparoscopic right hemicolectomy, a moderately differentiated adenocarcinoma was diagnosed on histological examination, staged as T3 N1b, stage IIIB. The patient underwent modified FOLFOX-6 chemotherapy after the surgery. All the serological analysis results for paraneoplastic antibodies were negative. After surgery and chemotherapy, his K-MMSE score increased to 23, showing improved cognitive function. The aggressive tendencies completely subsided, and he is currently stable. The patients’ timelines and information are shown in Figure 1 and Table 1.

This research was supported by “Research Base Construction Fund Support Program” funded by Jeonbuk National University in 2022.

Ethics approval is not needed for case reports in our institution, as per their instructions.

Clinical data may be provided to the editors upon appropriate request. 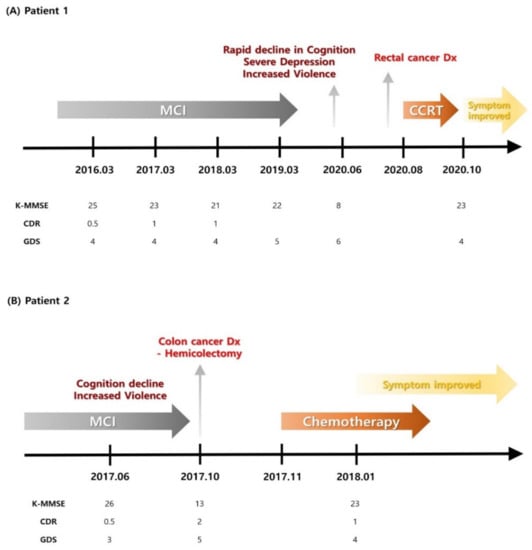 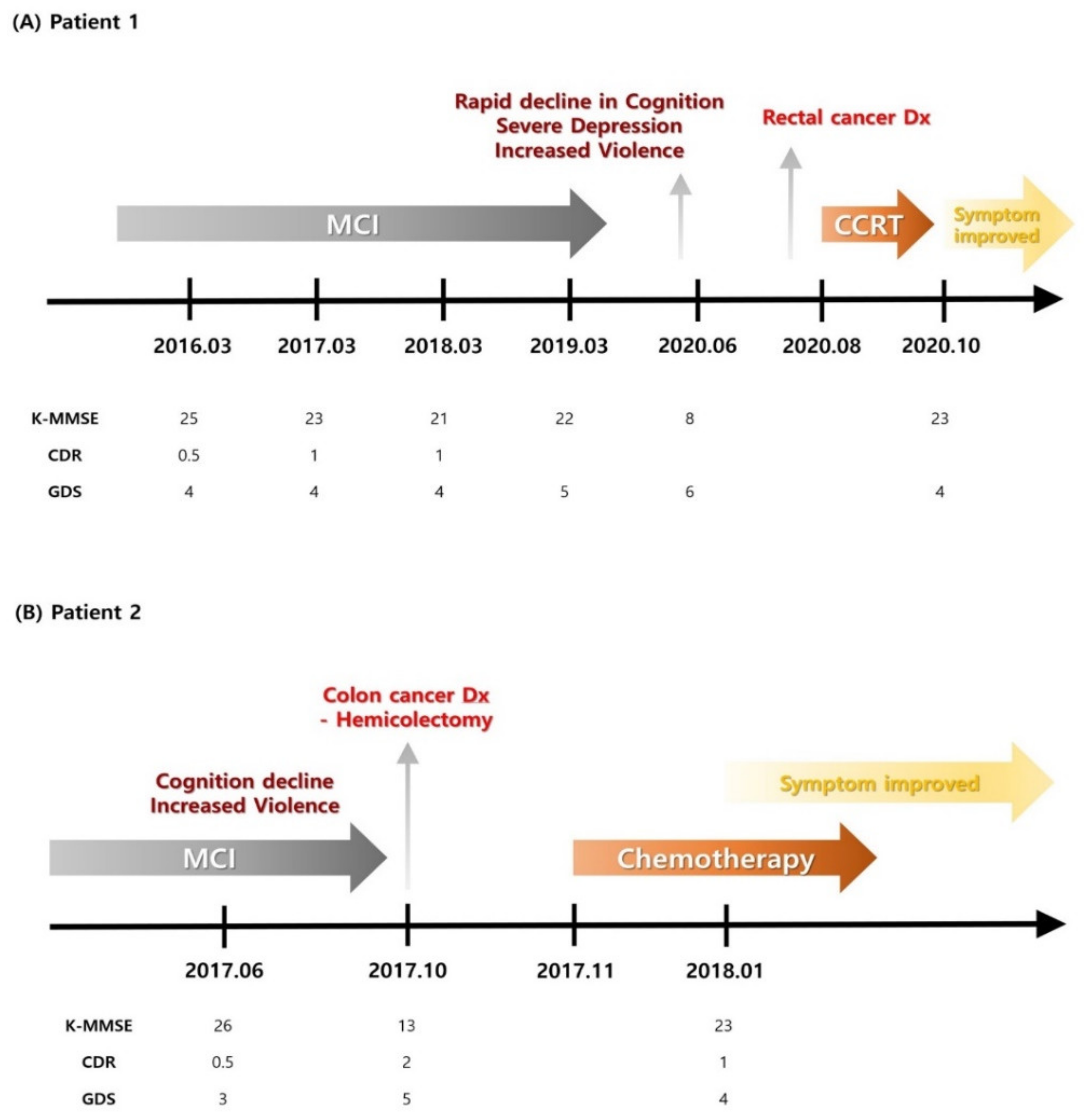