Purpose: The purpose of this study was to investigate which findings were delayed in diagnosis with respect to chest CT findings of paragonimiasis. Methods: This retrospective, informed questionnaire study was conducted to evaluate chest CT scans of 103 patients (58 men and 45 women; mean age 46.1 ± 14.6 years). The patients were diagnosed with paragonimiasis from 2003 to 2008 in four tertiary hospitals. Statistical analysis was performed using the chi-square test to identify differences between an initially correct diagnosis and an incorrect one of paragonimiasis on chest CT scans, for which we evaluated such variables as the location of lesion, type of parenchymal lesions, and worm migration track. Results: Nodular opacities on chest CT scans were the most common findings (53/94, 56.4%). The sign of worm migration tracks was only present in 18.1% of cases (17/94). Although statistically insignificant, the form of consolidation (18/25, 72%) and mass (6/8, 75%) on CT was common in correct diagnostics, and the form of the worm migration track (12/17, 70.6%) was high in correct diagnostics. Conclusion: A delayed diagnosis of paragonimiasis may often be made in patients with non-nodular, parenchymal lesions who are negative for worm migration track on chest CT scans.
Keywords: parasitic disease; paragonimiasis; lung; computed tomography (CT) parasitic disease; paragonimiasis; lung; computed tomography (CT)

The Institutional Review Board (IRB 2012-05-024) of our study centers approved this study. This study was conducted under a retrospective design, using an informed questionnaire survey. Therefore, our clinical series of patients did not need to submit a written informed consent form. An electronic survey with several topics (personal information, clinical findings, method of diagnosis, type of CT equipment, CT findings, and the initial impression on CT) was carried out at each hospital in 103 patients. Our clinical series of patients consisted of 58 men and 45 women, whose mean age was 46.1 ± 14.6 years (range, 12–88 years). They were diagnosed with pleuropulmonary paragonimiasis during a period ranging from 2003 to 2008. Data collection and statistical analysis were performed at a single center.
Questionnaires included the following: (a) age and sex, (b) place of residence, (c) underlying lung diseases, and (d) a past history of eating raw or undercooked shellfish. We also examined whether our clinical series of patients had underlying lung diseases to identify the presence of tuberculosis, emphysema, lung malignancy, and interstitial lung disease, among others. Clinical laboratory findings included (a) white blood cell (WBC) counts, (b) differential counts, and (c) absolute eosinophil counts. Of the 103 patients in total, 97 were available for an analysis of the clinical laboratory data. Eosinophilia was defined as the absolute eosinophil counts of ≥500/mL.
Our clinical series of patients were subjected to CT scanning with a single detector row scanner (Siemens Medical Solutions, Forchheim, Germany) (n = 17), 4 (LightSpeed QX/I, GE Healthcare, Milwaukee, WI, USA) (n = 27), 16 (n = 54), or 64 multi-detector CT scanners (n = 5) (Definition 16 or Sensation 64; Siemens Medical Solutions, Forchheim, Germany). CT scanning parameters were as follows: a single detector row scanner (collimation, 5 mm; tube voltage, 100–120 kV; tube current, 180–200 mA; gantry rotation time, 1 s; and pitch, 1.5); 4 MDCT scanner (collimation, 5 mm; tube voltage, 120–140 kV; tube current, 160–200 mA; gantry rotation time, 0.8 s; and pitch, 1.5); 16 or 64 MDCT scanner (collimation, 0.5 mm; tube voltage, 120 kV; tube current, 200 mA; gantry rotation time, 0.5 s; and pitch, 1.1). The images were reviewed for the current analysis, and were then reconstructed using a standard reconstruction algorithm with a slice thickness of 5 mm contiguously. All images were reviewed on the picture archiving and communication system (PACS) workstations using axial images, with a window level of 50 Hounsfield units and a window width of 350 Hounsfield units. Both non-contrast- and contrast-enhanced CT scans were obtained from 85 patients. For an enhancement study, a 100 mL of contrast medium (Ultravist 370; Schering, Berlin, Germany; Visipaque, Germany; GE Healthcare, Milwaukee, WI, Omniscan, USA; GE Healthcare, Milwaukee, WI, USA) was administered intravenously.
The parenchymal findings on CT scans were recorded for each lesion: (a) location (five lobes), (b) distribution (central, peripheral, and both), (c) type of lesions (non-cavitary nodule, cavitary nodule, consolidation, mass, linear opacity, and others), (d) margin of lesions, (e) lesion multiplicity, (f) size, and (g) pattern of enhancement (no enhancement, homogenous enhancement, heterogeneous enhancement, including central low attenuation, and perilesional ground glass opacity). The longest diameters of lesions were measured. In addition, known as one of the typical findings of pleuropulmonary paragonimiasis, the presence or absence of the sign of worm migration tracks was evaluated in 92 patients. If there were any signs, the corresponding patients were subjected to a measurement of the length and diameter. We also evaluated the presence or absence of pleural lesions in 102 patients. Finally, we analyzed initial diagnoses made solely on CT scans.
A binomial test was performed to identify statistical differences in such variables as age, sex, a history of eating raw or undercooked shellfish, eosinophilia, location, distribution, type of lesions, margin, and the pattern of contrast-enhancement between patients with an initially correct diagnosis and those with an incorrect one. The diagnostic accuracy of CT scans in patients with pleuropulmonary paragonimiasis was calculated by comparing the rates of diagnosis between the CT scans and the histological and clinical diagnoses. A p-value of <0.05 was considered statistically significant. Statistical analysis was performed using R software version 3.6.3 (R Foundation for Statistical Computing, Vienna, Austria).

In conclusion, a misdiagnosis of pleuropulmonary paragonimiasis is often made if the lesions contain a pneumonic consolidation or lung mass, as well as if there are lesions in the upper lobes. It would be mandatory to combine the clinical and laboratory manifestations with chest CT characteristics, which would be essential for making a diagnosis of pleuropulmonary paragonimiasis in patients without specific signs of the disease on CT scans.

Patient consent was waived due to being retrospective study concerning past chest CT.

Data are available in a publicly accessible repository.

Thank you Yun Hyeon Kim, Hyun Ju Seon, Mi Sook Lee, and Seong Hoon Park, for their cooperation in this survey. Thank you as well to Sung-Kwan Kim, who worked at Jeonbuk National University Hospital, for helping me organize data, organize statistics, and write our paper. 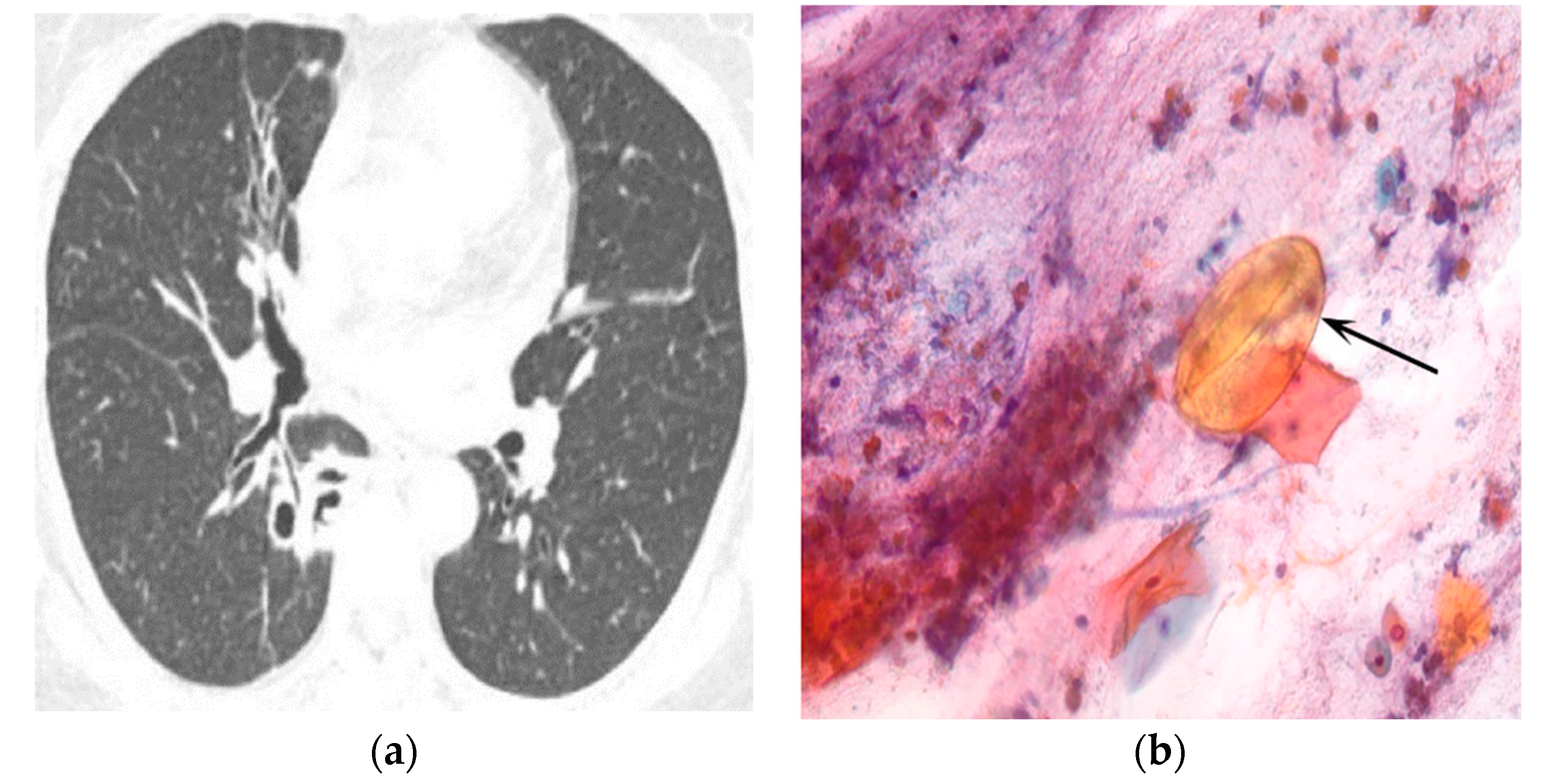 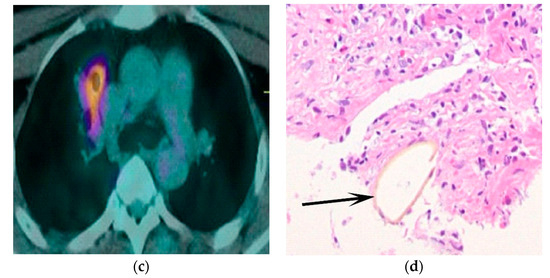 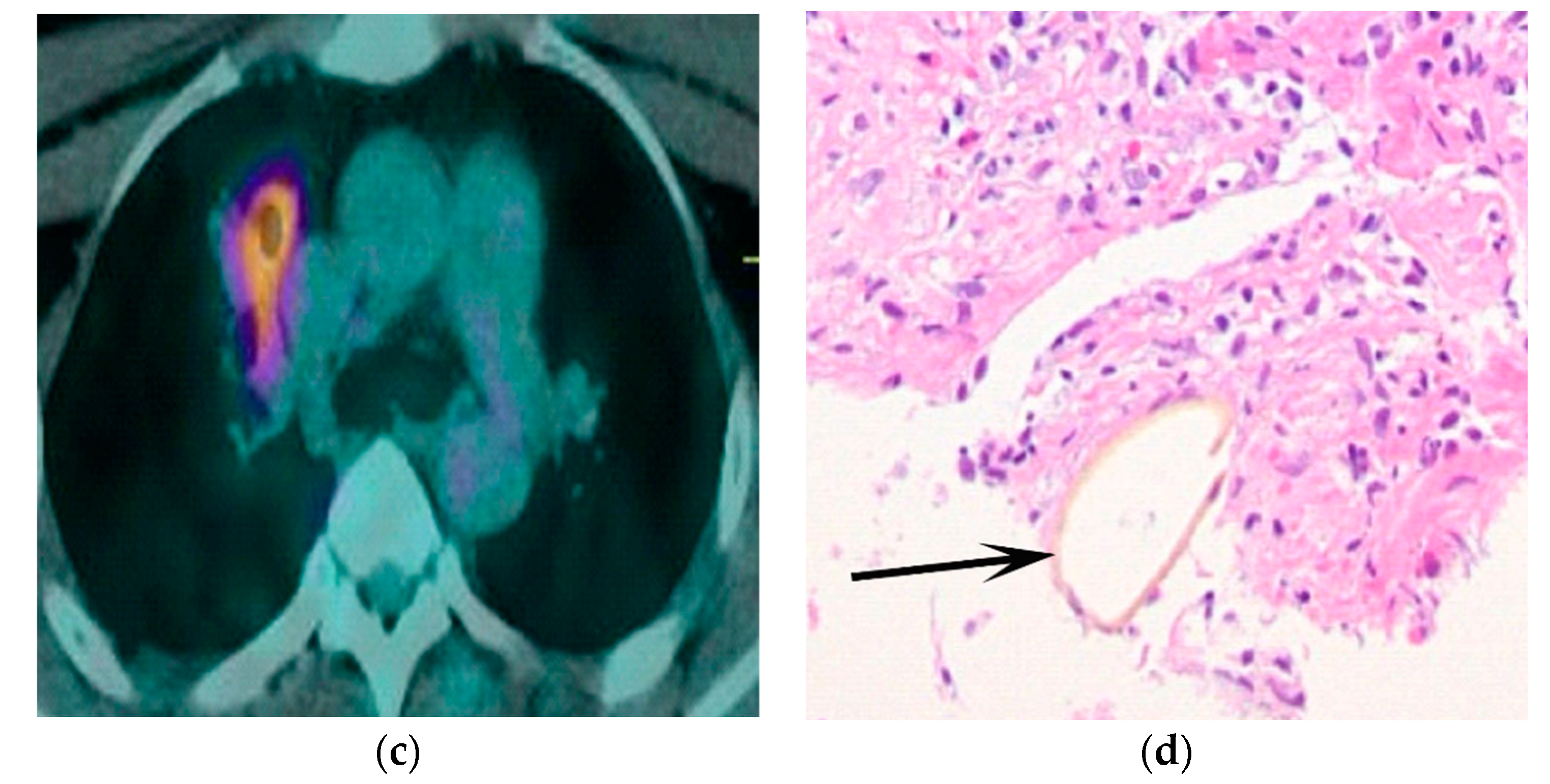 Table 5. Initial diagnoses made on chest CT scans.
Table 5. Initial diagnoses made on chest CT scans.
Note: Data in parentheses are percentages.
© 2022 by the authors. Licensee MDPI, Basel, Switzerland. This article is an open access article distributed under the terms and conditions of the Creative Commons Attribution (CC BY) license (https://creativecommons.org/licenses/by/4.0/).
We use cookies on our website to ensure you get the best experience. Read more about our cookies here.
Accept
We have just recently launched a new version of our website. Help us to further improve by taking part in this short 5 minute survey here. here.
Never show this again