Honorary Authorship: Is There Any Chance to Stop It? Analysis of the Literature and a Personal Opinion
Previous Article in Journal

Endovascular coil embolization is a widely performed treatment modality for intracranial aneurysms. This technique attempts to exclude the aneurysm from the intracranial circulation by filling the sac with coils [1]. This technique is safe and effective with a risk of early rebleeding estimated as 1.8% in the first year, and the degree of aneurysm occlusion is a strong predictor of this risk [2]. Coil treatment does not require antiplatelet therapy, which is an advantage, especially in the hemorrhagic phase. One of the major problems of coils is the rate of recanalization of the aneurysmal sac [3].
This is why embolization techniques using stents (including flow diverters, FDs) are increasingly used, especially for difficult-to-treat aneurysms [4,5,6] (i.e., giant aneurysms, fusiform aneurysms, blood blister-like aneurysms, and wide neck aneurysms). The risk of recanalization after treatment with stent is lower compared to treatment with coils alone [4,6,7,8].
Stenting requires a transient dual antiplatelet therapy to avoid the formation of intra-stent thrombosis [6,9]. Some authors have reported both early and delayed thrombotic events [9,10], and therefore the duration of this dual antiplatelet therapy is discussed between teams.
The need for a dual antiplatelet therapy limits stenting indications in the hemorrhagic phase [11] and contributes to the morbi-mortality of this technique considering rare hemorrhagic complications such as intracranial hematoma [12,13,14]. A review of the literature by Rouchaud et al. [14] found 101 cases of intraparenchymal hemorrhage following the placement of FDs unrelated to rebleeding. In 80% of these cases, the intraparenchymal hemorrhages were distributed in the territory of the treated artery. The pathophysiology remains controversial. To our knowledge, only two studies have shown the appearance of magnetic susceptibility artifacts (MSAs) in the territory of the stented artery [15,16]. Some of these MSAs were in the same locations of early ischemic lesion, suggesting that these MSAs would correspond to hemorrhagic transformation (microbleeds) [17]. In addition, previous studies have shown that antiplatelet therapy and the presence of microbleeds are both risk factors for intracerebral hemorrhage [17,18].
The aim of this study was to assess the occurrence of MSA following endovascular treatment of intracranial aneurysm by stent using susceptibility weighted imaging (SWI).

Between June 2015 and June 2018, we retrospectively reviewed at our center the demographic and radiological data of consecutive patients (age, sex, aneurysm localization, type and duration of antiplatelet therapy, history of previous sub-arachnoid hemorrhage (SAH) in the case of retreatment, date of first and follow-up MRI examinations) treated by stent (including FDs) to constitute the S-group (initial n = 74).
Patients followed only by CT angiography or catheter angiography were excluded (n = 2). Patients treated during the hemorrhagic phase were excluded (n = 3). SWI sequences must have been repeated at least one time during the imaging follow-up, which had to be done on the same scanner, if not patient were excluded (n = 11). Patients previously receiving a long term anticoagulation or antiplatelet therapy were excluded (n = 9). Patients must have received only one stent during all the follow-up. Patients must have received the center standardized antiplatelet therapy during the center standardized follow-up, if not, they were excluded (n = 3). The S-group was finally composed of 46 patients.
A one for one control group was also retrospectively constituted, minimizing the age and sex differences of all patients between both groups. The same data were recorded keeping the same exclusion criterion for these patients, which had to be treated solely by coils (C-group, n = 46).
The follow-up of the last patient included was achieved in June 2021.

All patients treated with stent (S-group) received a dual antiplatelet therapy for 6 months (Aspirin 75 mg once a day and Ticagrelor 90 mg twice a day) and a simple antiplatelet therapy (Aspirin 75 mg once a day) for life.
No patient treated with coils (C-group) had long term antiplatelet therapy. In this last group, the retrospective design did not permit to aggregate sufficient data on the exact peri procedural management of antiplatelet. But, the standard protocol in our center is to deliver a unique loading dose at the end of the procedure (250 mg of Aspirin).
Per procedure management of preventive anticoagulation in our center is standardized as a loading weight-dependent dose of heparin, and followed by bolus injections to maintain a TCA ratio between 2 and 2.5 during the endovascular procedure only.

The standard imaging follow-up scheme in our center after an endovascular treatment consisted of an MRI examination at three to six months, 12 months, 24 months, and 36 months (+/−3 months for annual FU). A clinical examination was conducted in the same week at each date of the imaging follow-up.

Two radiologists (one junior and one senior) read each MRI independently, each time evaluating the presence or absence of MSA, a count of the total number of MSA and the number of MSA in the territory of the treated artery. These readers were blinded to patient administrative, clinical, or other previous radiological data. A senior reviewed the clinical data and other MRI sequences to report eventual ischemic or symptomatic lesion.

Statistical analysis was performed using StataMP 13.0 (StataCorp, College Station, TX, USA). Quantitative variables were described using mean and the 95% confidence interval (CI). The test for normal distribution was Shapiro–Wilk. Qualitative and binary variables were described using frequency. Mean between groups (C-group/S-group; FD and non-FD stents) were compared using the Wilcoxon rank sum test or t-test. Qualitative and binary variable distributions among groups were tested using Chi-square or Fisher exact test. Agreement between observers was calculated through the Kappa for binary responses and intraclass correlation coefficient for quantitative ones. Kappas were interpreted according to Landis and Koch. Association between the appearance of MSA and the use of stent was assessed using multivariate logistic regression, reporting an odds ratio (OR), with 50 bootstrap replications. As a way to determine the delay of occurrence of MSA, their appearance were considered as an event in a survival dataset using time between corresponding date and the date of the first examination, and analyzed using the Kaplan–Meier estimate failure function. A p value of less than 0.05 was used to denote a statistical significance.

According to the review of radiological and clinical data, none of the MSA were symptomatic. These MSA findings did not change any dual antiplatelet protocol. There were no abnormalities of signal on 3D T2 FLAIR weighted imaging around MSA, and a study of DWI revealed no recent ischemic lesion in these areas.

All described MSAs were described in the phase imaging as having the same behavior as microbleeds, which excluded mimics such as microdissections, microaneurysms, microcalcifications, and arteriolar pseudocalcifications. In addition, the study of all available sequences described a restricted blooming artifact.
There was no difference between the C-group and the S-group in the number of MRI with MSA realized before treatment (0% and 8.5%, respectively, p = 0.565).
For all patients, the last follow-up MRI depicted the maximum number of MSA compared to previous scans (when there was MSA, and when they number increased). Thereby, in all cases, this last examination was taken to calculate the number of MSA for each patient.
In the S-group, considering the 35 pretreatment scans (76%), the mean number of MSAs was higher after endovascular treatment than before treatment (0.55 [0.06; 1.04] vs. 8.26 [5.48; 11.04], respectively). This comparison was not realized in the C-group because of the fewer numbers (four) of available pretreatment MRI.
The mean number of MSA was higher in the S-group than in the C-group on postprocedural SWI sequence (8.76 [5.76; 11.76] vs. 0.78 [0.32; 1.25], respectively, p < 0.001) with a higher frequency of appearance of MSA also in the S-group (78.26% vs. 21.74% in the C-group, p < 0.001) (Table 2).
There was no difference in the number of MRI in which an appearance of MSA was depicted between patients treated by the non-FD stent and patients treated by FD (19 (82.61%) vs. 17 (73.91%), p = 0.722). The type of non-FD stent did not influence the appearance of MSA (p = 0.618); this last analysis was not realized for FD stent because of the high prevalence of Pipeline in the study.
In the S-group, in the vascular territory of the treated artery, there was a higher number of MSA than in other vascular territories (mean number of 5.18 [3.43; 6.92] MSA vs. 3.08 [1.79;4.36], p = 0.001) (Figure 1).
This rate for preferential territorial appearance was neither different when comparing the S-group and C-group (p = 0.319), nor when comparing the non-flow diverter subgroup and the flow diverter one (p = 1.000) (Table 2).
A logistic multivariate analysis introduced in the regression variables such as age, sex, follow-up duration, localization, and previous SAH showed a link (p = 0.033, Pseudo-R2: 23.26%) between the type of endovascular treatment and MSA appearance on SWI imaging follow-up (p < 0.001), with a calculated odds ratio (OR) of 20.98 [5.24; 83.95], suggesting a higher relative risk of onset of MSA in the S-group than in the C-group (Table 3).
A survival analysis considered the appearance of at least one MSA as an event. In the S-group, the median probability of MSA appearance was reached in 112 days, and the first and third quartile in 96 and 545 days, respectively.

The appearance of MSA after treatment by stenting for intracranial aneurysm in patient under antiplatelet therapy was common, particularly in the treated artery territory. The nature and exact cause of these MSA are uncertain and probably multifactorial, and as they may be microbleeds, the question arises of the delayed risk of intra-cerebral hemorrhage in these patients under antiplatelet therapy.

This research was conducted in accordance with the actual laws and ethics and with the Declaration of Helsinki and its revisions. This retrospective study was conducted on a prospectively collected database of the PREDICT NRI Study, ClinicalTrials.gov Identifier: NCT04504695. Commitment to compliance (Reference Methodology MR-3) was declared to the French national information science and liberties commission (CNIL) with respect to the General Data Protection Regulation. The ethical committee of Brest University Hospital approved the protocol on 10 September 2019 under the number B2019CE.45. 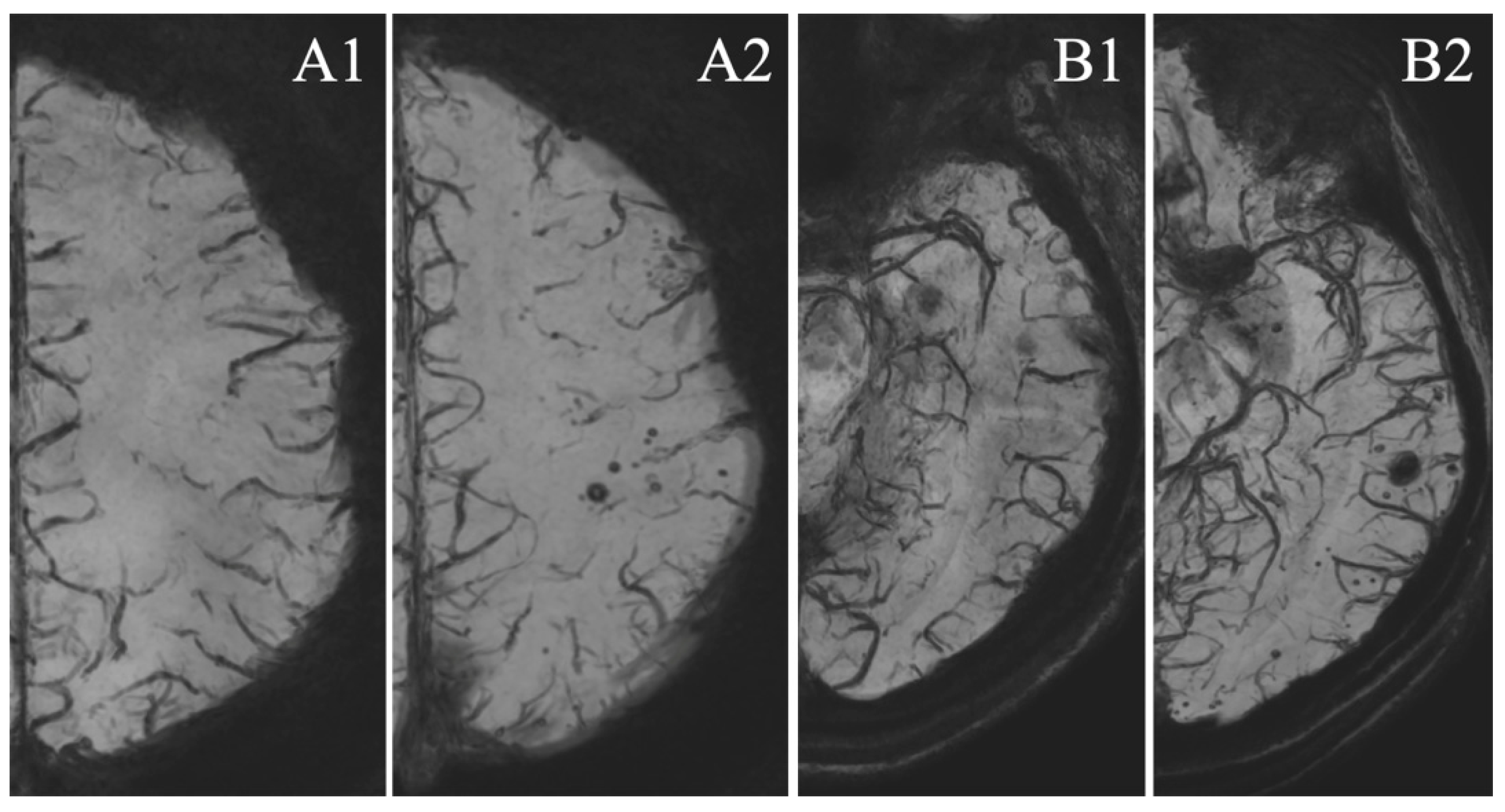