Evaluation of Human Ear Anatomy and Functionality by Axiomatic Design

Computers nowadays have different components for data storage and data processing, making data transfer between these units a bottleneck for computing speed. Therefore, so-called cognitive (or neuromorphic) computing approaches try combining both these tasks, as is done in the human brain, to make computing faster and less energy-consuming. One possible method to prepare new hardware solutions for neuromorphic computing is given by nanofiber networks as they can be prepared by diverse methods, from lithography to electrospinning. Here, we show results of micromagnetic simulations of three coupled semicircle fibers in which domain walls are excited by rotating magnetic fields (inputs), leading to different output signals that can be used for stochastic data processing, mimicking biological synaptic activity and thus being suitable as artificial synapses in artificial neural networks.
Keywords: neuromorphic computing; nanofibers; bending radius; data processing; spikes; neuron excitation neuromorphic computing; nanofibers; bending radius; data processing; spikes; neuron excitation

Neuro-inspired signal processing presently relates to the most intensively studied topics of technical sciences in a wide range of completely different realizations. It can be implemented from an electronic perspective, using, for example, field-programmable gate array (FPGA) circuits [1,2,3,4] or employing the recent achievements of spintronics [5,6,7], phase change materials [8,9] or other components.
Different computational schemes have been developed, such as artificial neural networks (ANNs), support vector machines or reservoir computing as a special type of recurrent ANN [10,11,12]. Simulating the human brain with recurrent neural networks necessitates calibration of weights and connections of the nodes in the network; this time-consuming task can be avoided by using a reservoir in which weights between input values and reservoir neurons are either set arbitrarily or optimized [13,14], while the weights between reservoir neurons and output layer are linearly trained, thus speeding up the training process [15,16]. For all these approaches, it is necessary to produce artificial neurons and synapses that are able to transfer and modulate data. Often, such artificial neurons and synapses are produced by electronic devices with a variable resistance which represents the synaptic weight [17,18,19].
Several approaches to neuro-inspired signal processing are based on magnetic materials. There is a rich tradition of such research, firstly introduced by works of Allwood, Cowburn et al. [20,21,22] and more recently by Grollier et al. [23,24], to name just a few. Generally, signal processing necessitates a deterministic or stochastic correlation between input and output values. This means that not only input and output need to be defined, but also data transport and processing between them. In several approaches, nanofibers or nanofiber networks are used for these tasks, in which data can be transported and manipulated in the form of domain walls [25,26,27]. The static and dynamic magnetic properties of such nanofibers depend strongly on their geometry, material and orientation with respect to the external magnetic field [28,29,30,31].
From the perspective of neuroscience and neuronal spikes, the effect of neuron excitation if a given threshold level is exceeded is fundamental [32,33,34]. In the language of bioelectronics, this can be interpreted in the following way: If the excitations from several inputs overlap constructively, a defined energy barrier is overcome, and the output action potential is different from zero. Hence, since biological signals have different amplitudes, it can be imagined that the implementation of a small network of ferromagnetic fibers might be a good choice to use magnetization dynamics to provide a wide enough range of vector values, mimicking neuronal and synaptic activity.
Here we investigate three-semicircle systems with two inputs and three outputs with dynamic micromagnetic simulations. Our results show that, depending on the chosen threshold values, different data processing operations can be defined in this simple system. It must be mentioned that the nanofiber network presented here forms a single artificial neuronal cell body, receiving signals and performing data processing, which can be used as a part of a forward-propagating neural network [35,36,37]. It does not form a full artificial neural network with axons and synapses, which has to be implemented after establishing the functionality of these devices. Generally, the functionalities of the elements found in the human brain are not 100% reflected by such a neuromorphic approach.

Micromagnetic simulations were carried out using the micromagnetic solver Magpar, which dynamically solves the Landau–Lifshitz–Gilbert equation of motion [38]. The simulation parameters were chosen as follows: saturation magnetization , damping constant , exchange constant , and anisotropy constant equal zero since the material permalloy (Py) was chosen. The total length of each single fiber is 1570 nm with a bending radius of 500 nm, the cross-section 10 nm × 60 nm, meshed with an average size of 3.3 nm. The externally applied field is 1 T at a frequency of 500 MHz, applied at local input areas of 60 nm × 60 nm × 10 nm. The simulated geometry is depicted in Figure 1. This combination of material and dimensions was investigated before and found to be suitable to enable domain wall nucleation and propagation by a local rotating magnetic field of the frequency chosen here [39]. Such nanostructures can be produced by e-beam lithography or similar methods from different materials, typically on Si wafers or other non-magnetic flat surfaces, but also in a free-standing form [40,41,42].
Micromagnetic simulations are performed with four input combinations, defined by in-plane rotating fields: LL, LR, RL, and RR, where L = counterclockwise and R = clockwise. These inputs are used to feed information into the system. The resulting output signals are derived at the positions A, B, and C, meaning that we obtain magnetization vectors. Each vector component can have values from −1 to +1. After that, for a given component (separately for ) the weighted sum is calculated. This step is not yet implemented physically; possible realizations are connections with different lengths, diameters or in general different probabilities for data transport in a defined time.
It should be mentioned that while this is a proof-of-concept, building up the system in reality is technologically possible. The dimensions chosen here are relatively large and well suited for lithographic production. Applying localized varying magnetic fields at regions of some ten to a few hundred nanometers diameter is usually performed by microwave technique, as shown in diverse papers [43,44,45,46].

In a recent study, neurons were defined as three coupled semicircle fibers in which domain walls are excited by rotating magnetic fields. These inputs, defined by pairs or rotational orientations (clockwise/counterclockwise), result in different outputs, which were investigated in terms of “learning” and “forgetting”. Depending on the number of added signals per time, defining “learning”, and the leaking rate, defining “forgetting”, these artificial neurons are found to reach a defined stimulus value with a certain probability. Such simple systems, which can be prepared by lithographic processes, can thus be used as parts of neuromorphic hardware.

Research efforts were partially supported (T. B.) by the Silesian University of Technology Rector’s Grant no. 14/030/RGJ21/00110. 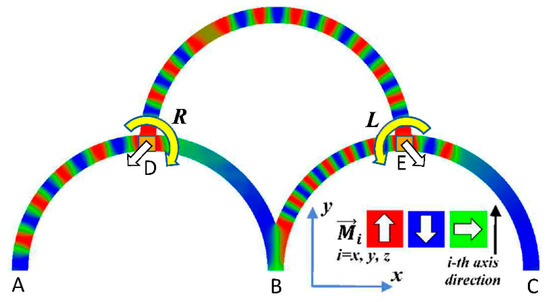 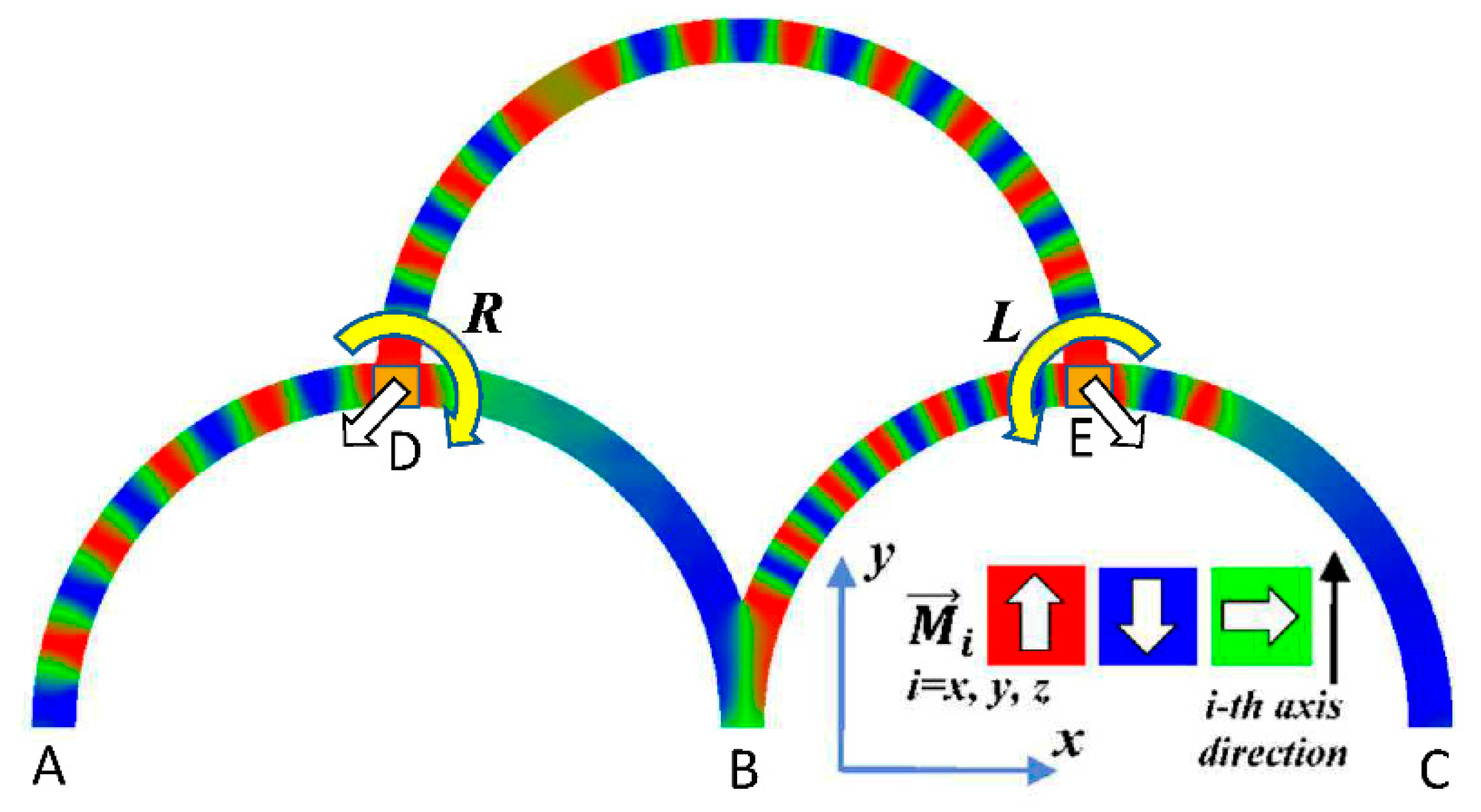 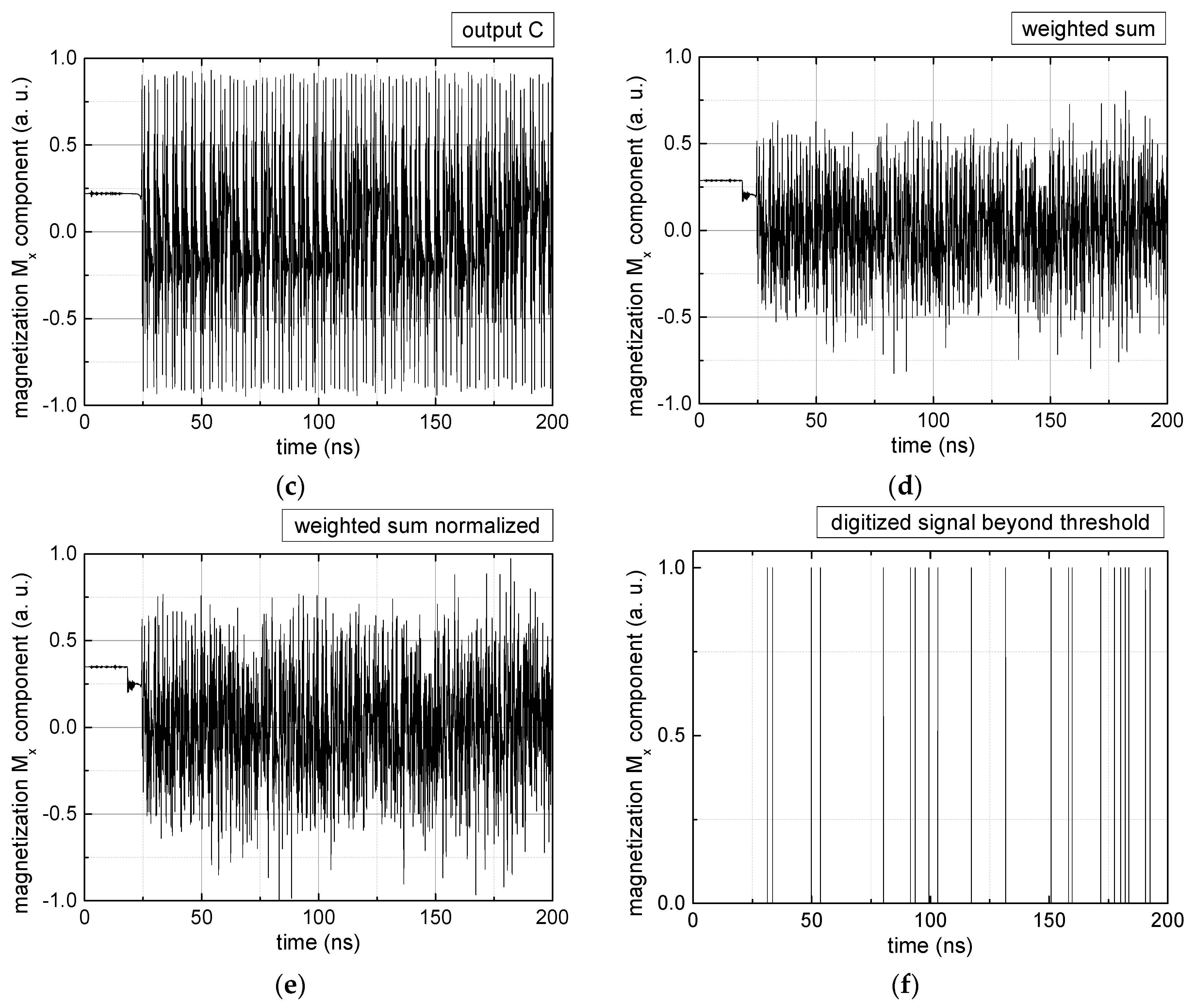 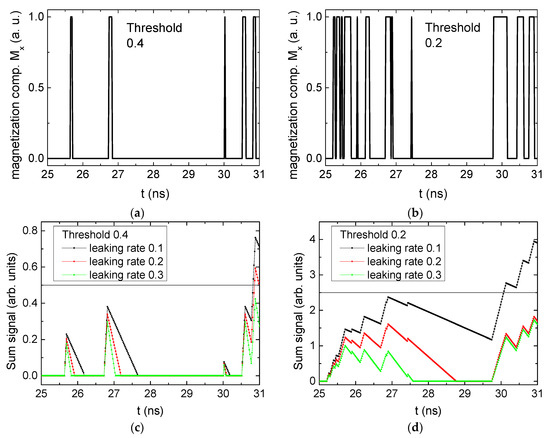