Taking inspiration from the hydrophilic and superhydrophilic properties observed from the nanostructures present on the leaves of plants such as Alocasia odora, Calathea zebrina, and Ruelia devosiana, we were able to synthesize cupric oxide (CuO) nanostructures from the plasma surface modification of copper (Cu) that exhibits hydrophilic and superhydrophilic properties. The Cu sheets were exposed to oxygen plasma produced from the P300 plasma device (Alliance Concept, Cran-Gevrier, France) at varying power, irradiation times, gas flow rates, and pulsing duty cycles. The untreated and plasma-treated Cu sheets were characterized by contact angle measurements, scanning electron microscopy (SEM), and energy dispersive spectroscopy (EDS) to determine the changes in the surface of Cu before and after plasma treatment. Results showed that plasma-treated Cu sheets exhibited enhanced wetting properties compared to untreated Cu. We attributed the decrease in the measured water contact angles after plasma treatment to increased surface roughness, formation of CuO nanostructures, and transformation of Cu to either CuO2 or Cu2O3. The presence of the CuO nanostructures on the surface of Cu is very useful in terms of its possible applications, such as: (1) in antimicrobial and anti-fouling tubing; (2) in the improvement of heat dissipation devices, such as microfluidic cooling systems and heat pipes; and (3) as an additional protection to Cu from further corrosion. This study also shows the possible mechanisms on how CuO, CuO2, and Cu2O3 were formed from Cu based on the varying the plasma parameters. View Full-Text
Keywords: cupric oxide; copper; bio-inspired material; nanostructures; oxygen plasma; surface modification; hydrophilic cupric oxide; copper; bio-inspired material; nanostructures; oxygen plasma; surface modification; hydrophilic
►▼ Show Figures 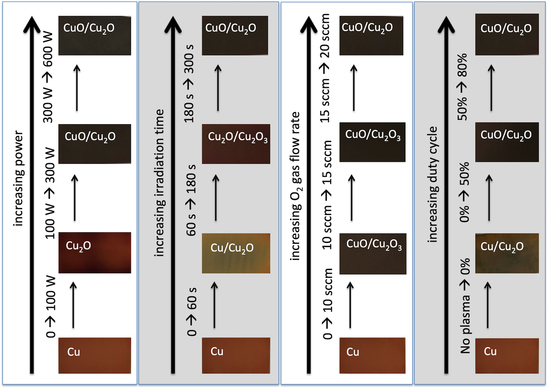