Structural properties of polymers are rather independent from the properties of their backbones. A common strategy to specifically tailor the mechanical performance of natural and synthetic polymers is to (reversibly) cross-link the polymer [1]. A “cross-link” is an additional bond connecting distant parts of one polymer or two distinct polymers. One prominent technological example is the vulcanization of rubber. In this process, natural rubber is permanently cross-linked with sulfur bridges, thereby dramatically enhancing its stiffness, strength and wear properties [2,3].
In biological materials, cross-links are often considerably weaker than the covalent backbone that holds the structure together. Consequently, upon loading, these bonds rupture before the covalent backbone fails. The rupture of cross-links unveils the segments of the structure that were previously shielded from loading, unraveling what is picturesquely called “the hidden length” [4]. Cross-link rupture and hidden length unraveling are highly efficient mechanisms to dissipate large amounts of energy and obtain enhanced mechanical properties [5,6]. Furthermore, these bonds are often reversible, meaning that cross-links may reform after the load is released. Consequently, these biological materials show self-healing properties even in the absence of living cells [7]. In the biological context, such cross-links are often referred to as “sacrificial bonds” [4] and can be found in numerous materials such as mussel byssus threads [8,9], bone [10,11,12], wood [13], spider silk [14,15], or caddisfly silk [16]. The nature of these bonds ranges from weak hydrogen bonds in spider silk [17,18] to relatively strong metal-coordination bonds in the mussel byssus that have binding energies approximately a quarter the strength of the backbone [19,20].
These special mechanical properties of cross-links have aroused a considerable amount of theoretical and modeling effort to describe, understand and predict their structural and mechanical effects. These studies include the investigation of stiff networks [21], the unbinding transition of semiflexible polymer bundles [22], understanding the role of nanoconfined hierarchical assemblies of weak hydrogen bonds in -sheet crystals in silk [23], the influence of network connectivity and entanglement on network mechanics [24], as well as calculating the force–extension relation of cross-linked polymers [25,26]. Also, the effect of hidden length opening on the mechanical properties of biological materials was explicitly studied [27,28,29].
In all these aforementioned studies, a cross-link is defined as an additional bond between either two parts of the same polymer (intrachain cross-link) or between two different polymers (interchain cross-link). Microscopically, this means that cross-links are modeled to form between two monomers. While this situation holds true in many materials, there are also important other classes of cross-links that connect more than two monomers. Typical examples of such cross-links are metal-coordination complexes, like the Fe–3,4-dihydroxyphenylalanine (DOPA) or Zn–histidine complex found in the mussel byssus [7,8,30]. Such a coordination complex consists of one metal ion bound to several organic ligands [31,32,33,34]. These metal complexes form fast and reversibly, have a high strength and provide the material with remarkable mechanical properties including high toughness and stiffness, enormous extensibility up to 100%, self-healing and exceptional adherence in wet conditions [7,9].
There are only a few studies that explicitly investigate the influence of the coordination of cross-links on the mechanical behavior. One exception are references [35,36] where di- and trivalent cross-links in collagen are studied. In the present paper, we generalize a model presented in our previous work [37] to study the effect of cross-linking a single chain to the important case of aligned fiber bundles. We refer to the “coordination” of cross-links as the number of ligands bound to a metal ion in a coordination complex (i.e., the number of monomers involved in one cross-link). A two-fold coordinated cross-link is referred to as a “dimer” or “bis-complex”, whereas a “trimer” or “tris-complex” refers to a three-fold coordinated cross-link. The deformation behavior of aligned fiber bundles that are cross-linked by three-fold or two-fold coordinated cross-links is compared. The physical properties of the cross-links are modeled using a generic approach given by the framework provided by the reactive empirical bond-order (REBO) potential [38,39] that gives the possibility to control the coordination of cross-links.
The obtained results indicate that interchain cross-links play a crucial role in the mechanical behavior of aligned, interacting chain bundles. As previously shown, the presence of cross-links may deteriorate the strength of aligned fiber bundles compared to the non-cross-linked case [40]. This effect is further analyzed in the current study and the results show that a higher coordination of cross-links may partially restore the strength.
The paper is structured as follows. First, the model is briefly explained and the mechanics of single and double polymer chains with pre-defined cross-link topologies are discussed. Then, the mechanical performance of aligned fiber bundles containing three-fold coordinated cross-links is comprehensively investigated and compared to the case of two-fold coordination only. The influence of cross-link density and grafting density is discussed. Finally, the results are summarized, and possible future research directions are discussed.

In a next step, we investigated the behavior of a system consisting of two parallel linear chains. In contrast to a single chain, a multichain system allows also for the presence of interchain cross-links, which have been shown to play a decisive role in the mechanics of aligned chain bundles [40]. Figure 4A shows the investigated topology of two- and three-fold coordinated complexes. This topology is similar to the one investigated for the single chain (Figure 2) but is formed between two chains instead of only one. Each chain has a length of 23 beads and contains five cross-link complexes. The topology is designed such that most of the cross-links are interchain (the two-fold coordinated case consists solely of interchain cross-links). The lateral distance between the chains was set equal to one covalent bond length. Corresponding load–displacement curves are shown in Figure 4B. Blue and red lines represent the mechanical response of the systems simulated with parameter sets I and II, respectively, and the gray line corresponds to the bare non-cross-linked polymer as reference.
Figure 4B shows the obtained load–displacement curves by plotting the relative force versus the reduced length (as before, is the strength of the non-cross-linked system). The system containing two-fold coordinated cross-links only (blue line) shows the same behavior as was already reported elsewhere [40]. In the non-cross-linked case, both chains are elongated simultaneously until they rupture when the chains are elongated above their maximum strength. Because the chains are identical also their strength and maximum displacement are identical, meaning that their strengths add up. Furthermore, the chains rupture simultaneously. This behavior changes in the cross-linked case. As the topology of cross-links is chosen such that the cross-links are loaded cooperatively each cross-link may be loaded up to its strength which is approximately a quarter the strength of the backbone. Consequently, five cross-links in parallel can take up more load than the backbone of the structure. This leads to the failure of the backbone of one of the chains and releases the load from the cross-links (peak at ). The remaining intact backbone then fails at its maximum extension . Because the two chains do not fail simultaneously, the strengths of the two chains do not add up and, consequently, the strength of the system is reduced approximately by a factor of two compared to the non-cross-linked system, where both chains take the load cooperatively. Thus, the presence of cross-links effectively weakens the system. Nevertheless, this effect can be partially reversed, when some disorder is introduced in the system. Cooperative loading of the cross-links is possible only, if the cross-links are spaced regularly [51]. Whenever some disorder is introduced in their spatial distribution, the load experienced by the cross-links at a given extension will be different and they will fail sequentially not exceeding the strength of the backbone.
The mechanical behavior of the three-fold coordinated system is different (red line in Figure 4B). The topology is designed such that most of the cross-links form (effective) interchain bonds. Nevertheless, having two chains only, it is not possible to prevent the formation of intrachain cross-links when all possible bonds should be closed. The main difference in the mechanical behavior compared to the system simulated with parameter set I is that the polymer backbone does not rupture prior to the contour length. This improves the mechanical properties such as strength and work-to-fracture of the system containing three-fold coordinated cross-link compared to the dimer only case. Values for the mechanical parameters are shown in Figure 4C. The strength increases from 0.53 to 0.87. While, the presence of cross-links weakens a multichain system in general due to presence of interchain cross-links that are loaded cooperatively, this weakening is strongly reduced for the three-fold compared to the two-fold coordinated system. In contrast to the single chain system discussed in the previous section, the work-to-fracture scales only slightly with the coordination, increasing roughly only from to .
While the load–displacement curve of the system simulated with parameter set I consists of two large peaks that correspond to the backbone rupture of the two involved chains, the corresponding curve of the system containing three-fold coordinated cross-links is more structured. Before the structure finally fails, several smaller peaks (labeled from 1 to 4 in Figure 4) can be observed. These correspond to the rupture and reformation of cross-links. Figure 5 shows the strain distribution in each bond before the rupture event directly at peak load. The load is distributed such that the intrachain cross-links rupture first. This leads to the formation of a purely two-fold coordinated topology consisting solely of interchain cross-links. The transformation of three-fold into two-fold topology is completed when peak 4 is reached. In total, seven two-fold coordinated complexes have formed and peak 4 corresponds to their rupture. Exactly at , the load is shifted to the backbone. From now on covalent bonds start elongating until the structure fails.

The computational results presented have been achieved using the Vienna Scientific Cluster (VSC). 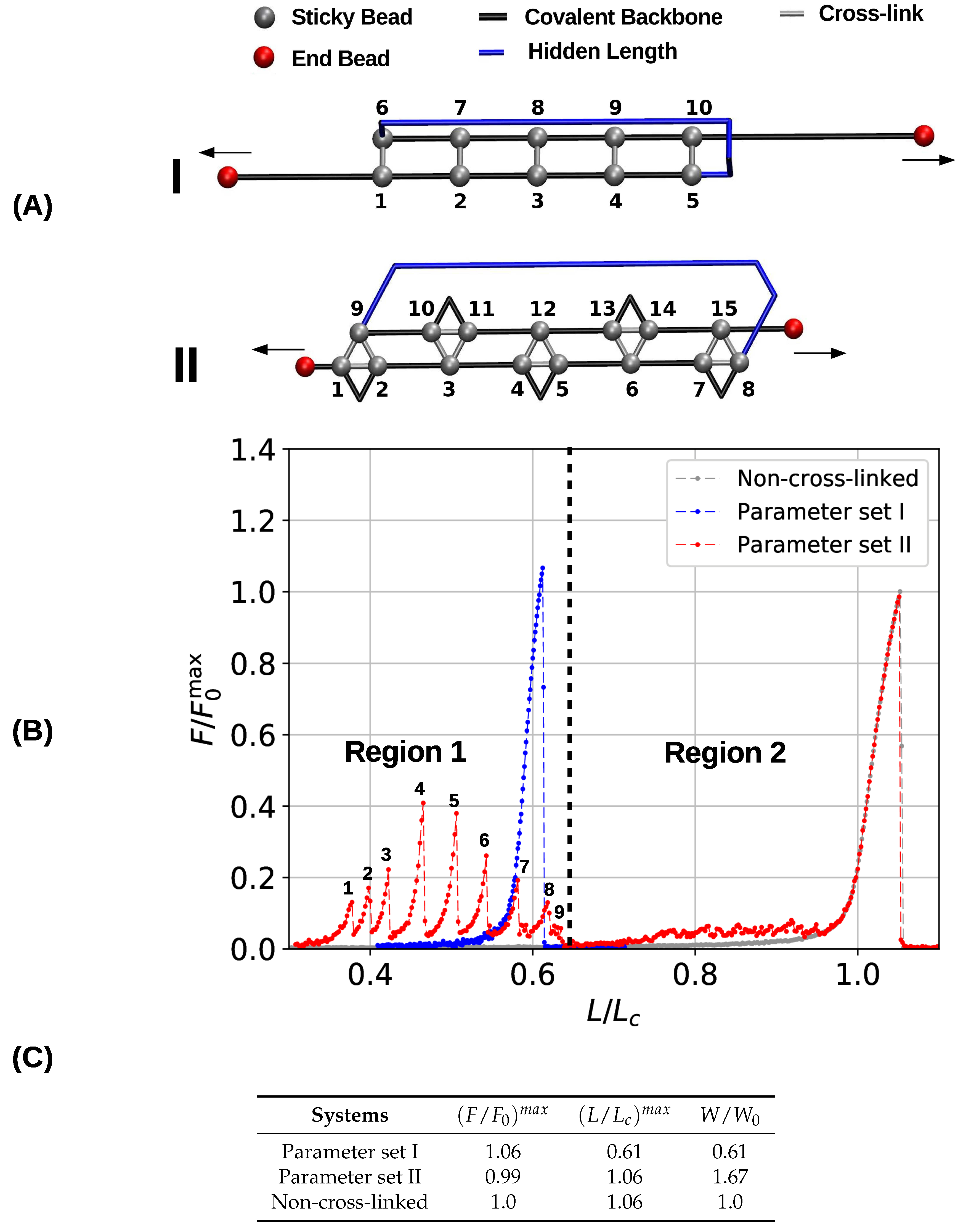 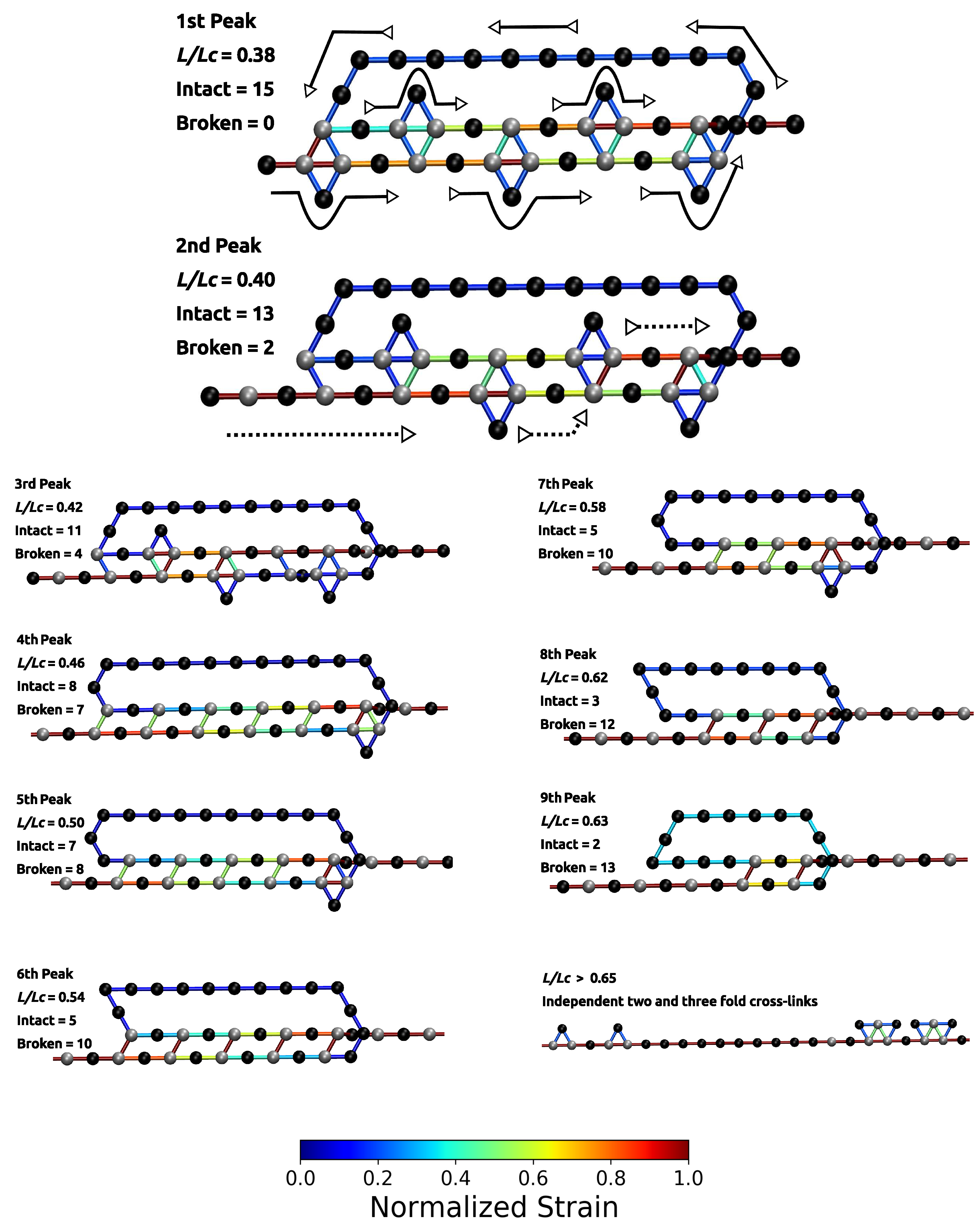 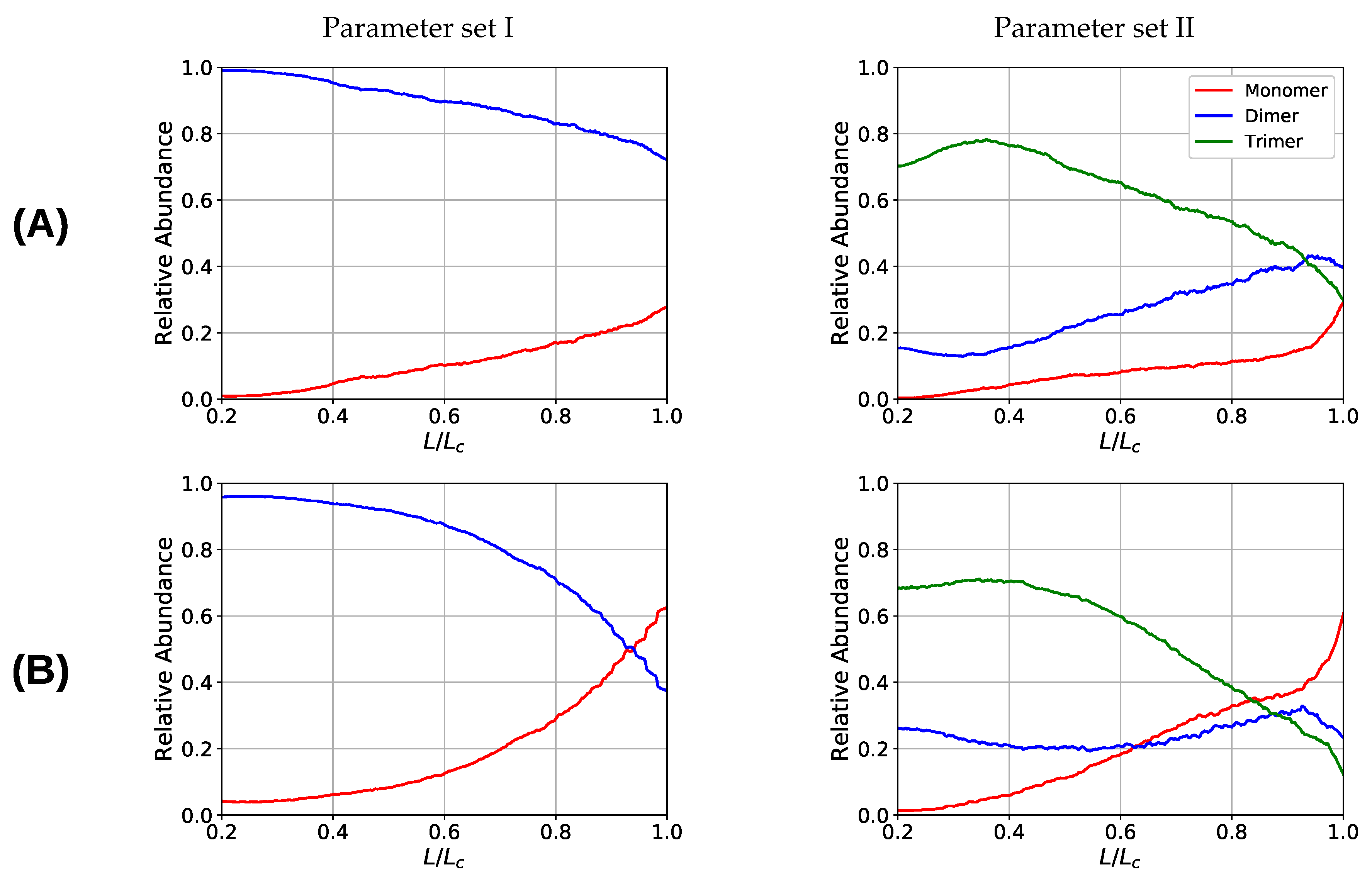 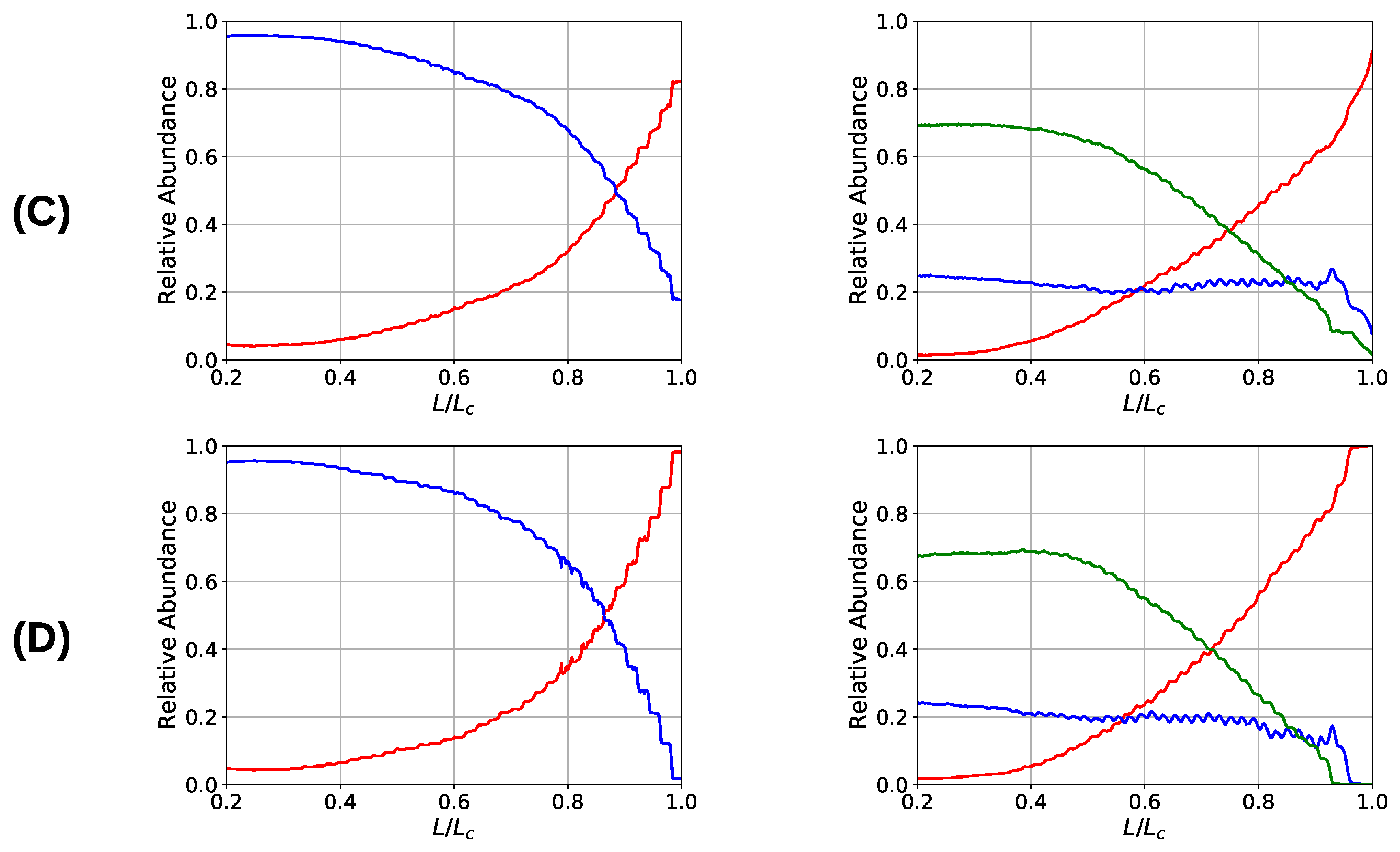 Table 1. Simulation parameters describing covalent bonds and reversible cross-links.
Table 1. Simulation parameters describing covalent bonds and reversible cross-links.
The unit of length is set by the hard sphere radius R, the energy scale is given by . The two parameter sets given correspond to a system that can only form dimers (I) and where the most stable cross-link is a trimer (II). The parameters are chosen such that the binding energy of one complex is a quarter of a covalent bond.
© 2019 by the authors. Licensee MDPI, Basel, Switzerland. This article is an open access article distributed under the terms and conditions of the Creative Commons Attribution (CC BY) license (http://creativecommons.org/licenses/by/4.0/).
We use cookies on our website to ensure you get the best experience. Read more about our cookies here.
Accept
We have just recently launched a new version of our website. Help us to further improve by taking part in this short 5 minute survey here. here.
Never show this again