Noncovalent Interactions in the Catechol Dimer

Mussels are marine organisms that have been mimicked due to their exceptional adhesive properties to all kind of surfaces, including rocks, under wet conditions. The proteins present on the mussel’s foot contain 3,4-dihydroxy-l-alanine (DOPA), an amino acid from the catechol family that has been reported by their adhesive character. Therefore, we synthesized a mussel-inspired conjugated polymer, modifying the backbone of hyaluronic acid with dopamine by carbodiimide chemistry. Ultraviolet–visible (UV–Vis) spectroscopy and nuclear magnetic resonance (NMR) techniques confirmed the success of this modification. Different techniques have been reported to produce two-dimensional (2D) or three-dimensional (3D) systems capable to support cells and tissue regeneration; among others, multilayer systems allow the construction of hierarchical structures from nano- to macroscales. In this study, the layer-by-layer (LbL) technique was used to produce freestanding multilayer membranes made uniquely of chitosan and dopamine-modified hyaluronic acid (HA-DN). The electrostatic interactions were found to be the main forces involved in the film construction. The surface morphology, chemistry, and mechanical properties of the freestanding membranes were characterized, confirming the enhancement of the adhesive properties in the presence of HA-DN. The MC3T3-E1 cell line was cultured on the surface of the membranes, demonstrating the potential of these freestanding multilayer systems to be used for bone tissue engineering. View Full-Text
Keywords: mussel-inspired; biomimetic; dopamine; multilayer freestanding membranes; adhesiveness; osteogenic differentiation; bone tissue engineering mussel-inspired; biomimetic; dopamine; multilayer freestanding membranes; adhesiveness; osteogenic differentiation; bone tissue engineering
►▼ Show Figures 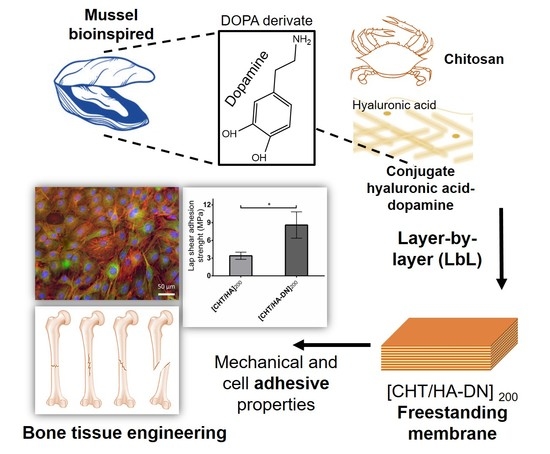