Categorization and Stigmatization of Families Whose Children Are Institutionalized. A Danish Case Study

Parochial Linguistic Education: Patterns of an Enduring Friction within a Divided Catalonia

:
Amid the tensions created by the secession push in Catalonia (Spain), an important conflicting issue has been the “immersion linguistic educational system”, in which the Catalan language has precedence throughout all of the primary and secondary school curricula. Here, we present an analysis of a survey (n = 1002) addressing features of linguistic and political opinion profiles with reference to the mother language and feelings of national identity. The results show that the mother language is a factor that differentiated the participants in terms of common linguistic uses and opinions about the “immersion educational system”. These results were confirmed when segmenting respondents via their feelings of national self-identification. The most distinctive political opinions consisted of either asserting or denying the damage to social harmony produced by the secession campaign. Overall, the findings show that a major fraction of the Catalonian citizenry is subjected to an education system that does not meet their linguistic preferences. We discuss these findings, connecting them to an ethnolinguistic divide based mainly on mother language (Catalan vs. Spanish) and family origin—a complex frontier that has become the main factor determining alignment during the ongoing political conflict.
Keywords:
secessionism; Catalonia; immersion linguistic education; bilingualism; ethno-linguistic cultures; political conflict

The participants were responders to a survey developed by the GAD-3 enterprise (GAD-3 (https://www.gad3.com/ (accessed on 22 August 2021))) in December 2020 through phone calls to either the landlines or mobile phones of people over 18 years old residing in Catalonia. The sample was representative of all people over 18 years old living in Catalonia; the population here slightly differed from that found in ordinary political surveys, which are more focused on citizens with the right to vote. This was the legal-age population that was directly affected by current laws (both central (all of Spain) and regional (Catalonia) laws). The sample size was people who were surveyed across the region, and it was weighted afterwards for age group and gender to avoid or reduce sample biases.

The survey included 22 questions (see the SI Appendix for the full survey drafted by the GAD-3 private polling institute) about linguistic and educational issues, as well as opinions about political and governance topics related to the ongoing secession conflict in the region, among other standard socioeconomic issues, such as gender, age group, profession, and labour situation (see Table S1 in the Supplementary Materials). The standard error of the estimated percentages corresponding to each binary question was less than 1.6%. For reasons of time and economy, some questions were directed to only individuals (survey questions Q05 to Q09), and the standard error of the percentages corresponding to each of these binary questions was less than 2.5%. Through this standard error, we could obtain appropriate approximate confidence intervals.

The distributions of opinions/preferences related to several questions for the entire sample are presented first (Table 1 and Table 2; Figure 1). Then, several figures show the full pattern of contrasts obtained by segmenting the sample by either “mother language” (“Catalan”, “Spanish”, “both languages”, “other languages”) (Table 3, Figure 2 and Figure 3) or “feelings of national identity” in six groups (“only Spanish”, “more Spanish than Catalan”, “as Spanish as Catalan”, “more Catalan than Spanish”, “only Catalan”, and ”DK/NA”) (Table 4, Figure 4 and Figure 5).

a.
Preferences about the Catalonian linguistic educational system.

b.
Segmentations according to different categories.

b.1.
Linguistic segmentation based on Q03.2 (Mother Language):

Table 4 and Figure 4 present the results of the segmentation of the population with the variable “feelings of national identity” and of crossing it with other variables derived from the survey, thus indicating, as before, the value of the chi-square of each contingency table, its degrees of freedom, the standardized Pearson contingency coefficient, and the p-value of the test. The variables are grouped in consideration of their nature, and each group is presented in descending order, from the top down, of association magnitude, as measured by the contingency coefficient, C. Only the variables of “gender” and “first language in school” present an insignificant stochastic dependence on “feelings of national identity”, while all of the remaining variables exhibit clear stochastic dependence on this variable, which is significant at values of at least 5%, with very small p-values in most cases.

The following are available online at https://www.mdpi.com/article/10.3390/genealogy5030077/s1: The same general approach was applied to segmentations by age groups (Q02, see Survey Questions), which were categorized into four groups: 18–29 years, 30–44 years, 45–64 years, and 65 or older, as well as to the variable “Do you think that the secession bid had seriously damaged the social harmony among Catalonian citizens?” (Q14.1, see Survey Questions), with three possible answers: “YES”, “NO”, or “DK/NA”. We have not displayed all the results, though the SI provides additional bar diagrams for several variables, thus allowing for further comparisons. These modified bar charts illustrate relevant comparisons for different segments of the sample, sorted by “mother language” (Figures S1 and S2) and “age segments” (Figure S3), and for contrasts corresponding to segmentation via opinions on “damage to social harmony” (Figure S4) and the national identity of “only Catalan” (Figure S5). The width of the bars is proportional to their frequency in the sample. A measure of two standard error of frequency estimates is also indicated, supplying an approximate 95% confidence interval.

The authors are grateful to the reviewers for their constructive suggestions for improvement. The flexibility and help of the Associate Editors at Genealogy also deserve praise.

As stated: The data for this research came from phone surveys performed by the private polling institute GAD3 (https://www.gad3.com (accessed on 22 August 2021)), complying with Spain’s full legal requirements and restrictions related to conducting sociological studies on voting behaviour and political opinion, and in accordance with the ESOMAR International Code on Market, Opinion and Social Research, and Data Analytics. The anonymous poll was conducted by live interviewers; 50% was conducted by landline phone and the other 50% by mobile phone. The contacted individuals were free to refuse to answer the survey, and there were no questions regarding the personal features of responders, who had a full guarantee that their responses would be treated as untraceable numerical scores within a unique sample while preserving full anonymity. The researchers were allowed access to the datasheets containing the raw scores of the survey under totally blind conditions concerning the identities of the surveyed participants, who could not be traced in any way. All of the statistical analyses included in this paper also fulfilled the conditions established by the Ethical Commissions of the University of Barcelona, Pompeu Fabra University, and the Autonomous University of Barcelona for the treatment of human data, as their original sources were surveys taken by official agencies or private firms subjected to specific external regulations and the relevant guarantees. As such, ethical approval was not required for this secondary analysis of the data, as per the authors’ institutional and national regulations. 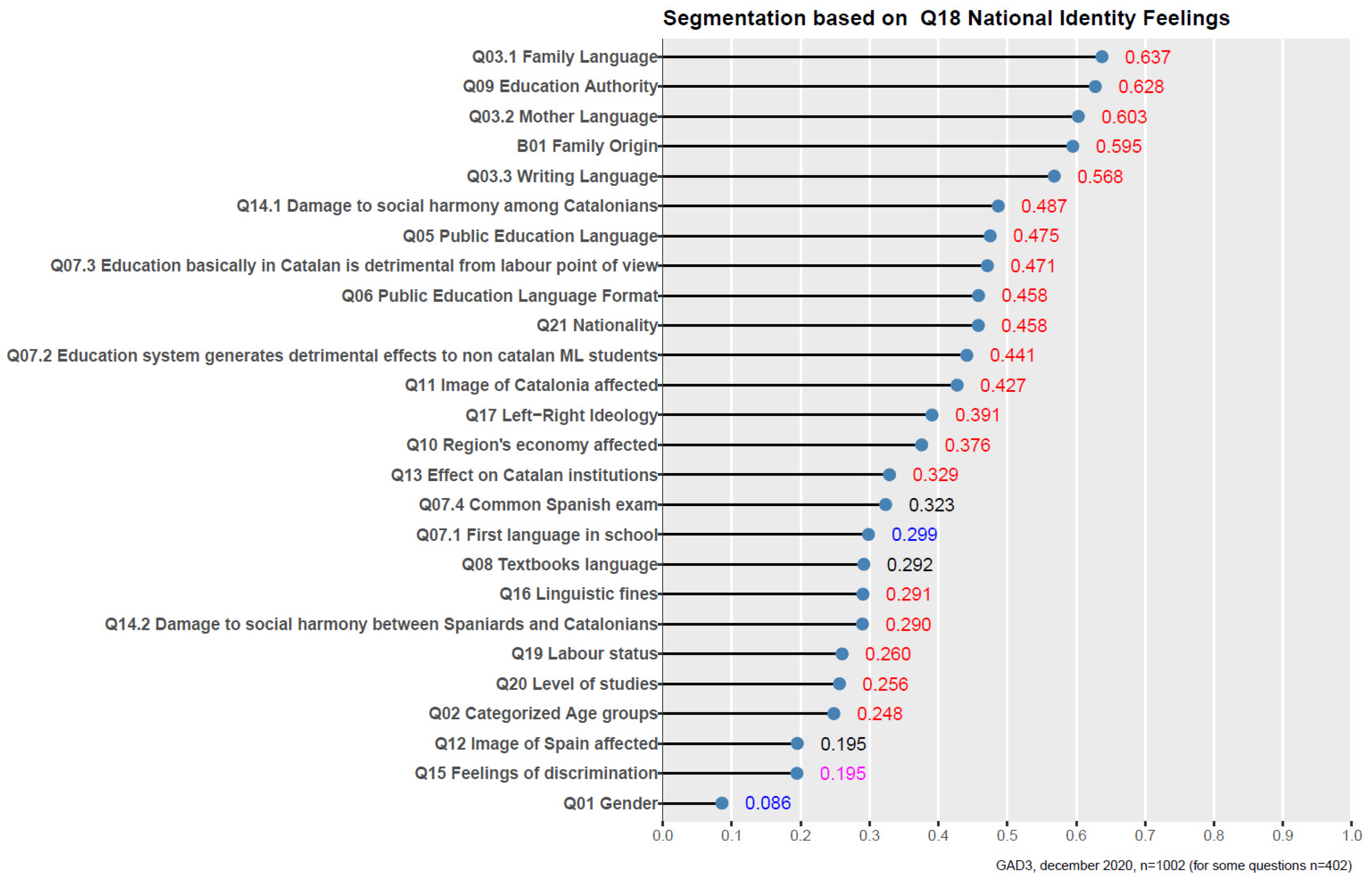