The cytotoxic activity of T cells and Natural Killer cells is usually measured with the chromium release assay (CRA), which involves the use of 51Chromium (51Cr), a radioactive substance dangerous to the operator and expensive to handle and dismiss. The accuracy of the measurements depends on how well the target cells incorporate 51Cr during labelling which, in turn, depends on cellular division. Due to bystander metabolism, the target cells spontaneously release 51Cr, producing a high background noise. Alternative radioactive-free methods have been developed. Here, we compare a bioluminescence (BLI)-based and a carboxyfluorescein succinimidyl ester (CFSE)-based cytotoxicity assay to the standard radioactive CRA. In the first assay, the target cells stably express the enzyme luciferase, and vitality is measured by photon emission upon the addition of the substrate d-luciferin. In the second one, the target cells are labelled with CFSE, and the signal is detected by Flow Cytometry. We used these two protocols to measure cytotoxicity induced by treatment with NK cells. The cytotoxicity of NK cells was determined by adding increasing doses of human NK cells. The results obtained with the BLI method were consistent with those obtained with the CRA- or CFSE-based assays 4 hours after adding the NK cells. Most importantly, with the BLI assay, the kinetic of NK cells’ killing was thoroughly traced with multiple time point measurements, in contrast with the single time point measurement the other two methods allow, which unveiled additional information on NK cell killing pathways. View Full-Text
Keywords: cytotoxic assay; chromium release assay; fluorescence; bioluminescence imaging; kinetics cytotoxic assay; chromium release assay; fluorescence; bioluminescence imaging; kinetics
►▼ Show Figures 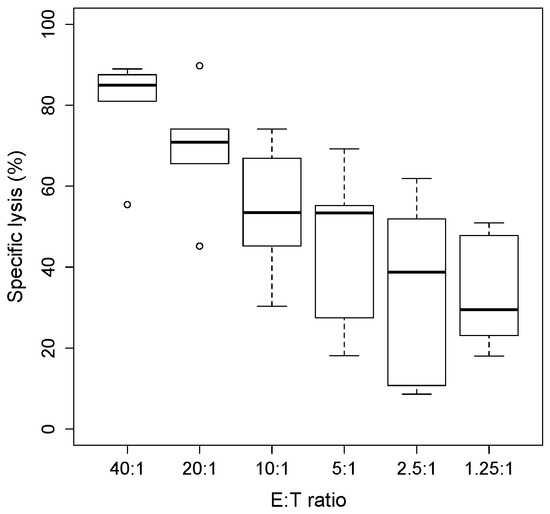