The DLCNN model assessment was performed using different error metrics: random error quantification (root mean square error, RMSE), systematic error quantification (absolute mean relative error, AMRE), and uncertainty quantification (F1 Score). The error metrics used in study are summarized below.
Absolute mean relative error (AMRE) is the mean of the relative percentage error, calculated by the normalized average: where the number of predicted polygons is , and the number of actual polygons is yi, and n is the quantity of samples used in the calculation. For an unbiased model, the AMRE would be 0 [56,57].
The root mean square error (RMSE) is a statistical metric used to measure the magnitude of the random error and defined as:
Here, RMSE ranges from 0 (an optimal value) to positive infinity [58,59].
Correctness indicates how many of the predicted positives were truly positive. Completeness determines what percentage of actual positives were detected. F1 Score derives a balance between Correctness and Completeness into one value [60]:
Here, true positive (TP) is the number of polygons correctly identified, false positive (FP) is the number of polygons identified by model but not true, and false negative (FN) is undetected polygons. Higher values of Correctness indicate that there are fewer false positives in the classification. If the model always predicts positive magnitudes, Completeness will be 1, which indicates that ice-wedge polygons are properly detected by the model. Moreover, an F1 score of 1 indicates perfect prediction of ice-wedge polygons.

We statistically evaluated the performances of the DL model in detecting IWPs. For the quantitative assessments, from each image scene, we randomly selected 15 subsets to manually delineate polygons as a reference (ground-truth polygons). Systematic error was exhibited for all image scenes, and results showed significantly low AMRE values (0.16–0.19) for three-band combinations (1,2,3 and 3,4,5) for the different tundra types (tussock and non-tussock sedge) (Table 1). Other combinations produced comparatively high systematic error (0.33–0.38). The results provide insights on how to select a proper band combination for remote sensing satellite images for deep learning modeling. Similarly, the random error for two band combinations (1,2,3 and 3,4,5) varied from 0.17 to 0.21 for the two candidate scenes (Table 2), indicating a robust performances of the new version of the ice-wedge polygon mapping algorithm in varying tundra types (tussock and non-tussock sedge). Therefore, this methodology adopted the best combination scheme to perform the image analysis for IWP mapping.
We used three quantitative error statistics (correctness, completeness, and F1 score) to show the performances of the framework. The candidate scenes 1 and 2 produced high model detection accuracies for the F1 score, ranging between 0.89 to 0.95, for two band combinations (1,2,3 and 3,4,5) (Figure 7, Table 3). Similarly, scenes 1 and 2 scored high values for completeness (85–91%). In the two cases, the correctness metric scored ~1, allowing less freedom for false alarms. Optimization of the multispectral bands improved the detection accuracy of the model.
Box plots for the F1 score for five three-band cohorts (1,2,3; 2,3,5; 2,3,7; 3,4,5; and 3,5,7) are presented in Figure 8. The distribution of F1 scores showed substantial discrepancies in terms of variability for the band combinations for (2,3,5), (2,3,7), and (3,5,7) compared to other band combinations ((1,2,3) and (3,4,5)). Therefore, the two band combinations (1,2,3) and (3,4,5) are treated as the best combinations of spectral bands to create robust models for ice-wedge polygon mapping.
The Kruskal–Wallis test was conducted to determine whether the medians from various datasets are different or not. We calculated p-values for two band combinations (1,2,3 and 3,4,5) compared with other combinations to test for significant differences in F1 scores (Table 4). The p-values were found to be < α (alpha) = 0.05 for the combinations of (2,3,5), (2,3,7), and (3,5,7). On the other hand, the two band combinations (1,2,3) and (3,4,5) were not statistically different with p-values > α = 0.05. Therefore, the two band combinations (1,2,3) and (3,4,5) are used in deep learning-based modeling for this study area.
In this exploratory study, we use two tundra vegetation types, tussock sedge and non-tussock sedge. However, arctic tundra includes additional vegetation types. Therefore, the model can be biased when it is applied to other tundra vegetation types such as prostrate dwarf-shrub, herb, lichen tundra; rush/grass, forb, cryptogam tundra; graminoid, prostrate dwarf-shrub, forb tundra, etc. In the future, this experiment can be extended considering more diverse tundra landscapes, such as graminoid and shrub dominated vegetation cover types, to systemically gauge the improvement of the DL model prediction accuracies.
The mapping workflow discerned the IWPs by exhibiting significantly low random and systematic error for band combinations (1,2,3). Results suggest that the prediction accuracy of the Mask-RCNN model is significantly influenced by the input MS bands. The DL model exhibited high detection accuracies (89% to 95%) compared to previous studies [20,21]. According to the results, it is also suggested that the removal of the unnecessary bands information is crucial for enhancing the model accuracy. Most of the DLCNN architectures are tailored to operate in the context of three-band or single-band images. Therefore, when practicing transfer-learning strategies, there is a high chance of overlooking the wealth of information contained in multispectral image channels and their correlation among bands. This additional information could prudently leverage model performances and prediction accuracy. Overall, transfer-learning strategies optimized the model with limited data utilizing processing time and computation resources instead of original DL based hardcore programming competencies. Moreover, the use of all spectral bands does not necessarily improve classification accuracy, but there is a high tendency to degrade to prediction accuracies. The sensible approach is to methodologically select optimal three bands cohort with respect to the classification problem in hand. Therefore, to create an automated ice-wedge polygon mapping framework, optimal combination of spectral bands was obtained from the very high resolution satellite imagery. In summary, we conducted our exploratory analysis based on transfer learning strategy to get the most benefit out from existing CNN weights that are formulated based on three-band imagery from everyday image analysis. While the current exploratory study scaffolds on a single candidate DL model, a candidate geo-object, and a satellite sensor model, in future research, we will aim to expand the experimental design incorporating multiple DL models, a suite of geo-object types, and several satellite sensor model to investigate the effect of band statistics on DL model predictions.

Our study highlights the importance of the band combinations in the use of multispectral datasets on deep learning convolutional neural net (DLCNN) model prediction accuracy. Here, in the context of ice-wedge polygon mapping, we applied the DLCNN architecture, to detect IWPs from eight-band Worldview-02 VHSR satellite imagery in the North slope of Alaska across two common tundra vegetation types (tussock sedge and non-tussock sedge tundra). We found that the prediction accuracy of the Mask-RCNN model is significantly influenced by the input of MS bands. Optimization of multispectral image bands combination reduced the ambiguity, uncertainty, and errors in ice-wedge polygon mapping. Results suggest that mapping applications depend on the careful selection of the best band combinations. The selected band combination had the maximum amount of information with the least amount of correlation among the bands and the correlation between the bands were as small as possible. Overall, our findings emphasize the importance of considering the image statistics of input MS bands and careful selection of optimal bands for DLCNN predictions, when the architectures are restricted with three spectral channels. Thinking beyond yet another target detection based on transfer learning, we have materialized an-image-to-assessment pipeline, which is capable of parallel processing of sheer volumes of image scenes on HPC resources. Our framework is not fundamentally limited to IWP mapping but rather an extensible workflow to perform high throughput, regional-scale mapping tasks such as other permafrost features; thaw slumps, capillaries, shrubs, etc. Our future study is to apply the mapping algorithm over large land areas of the heterogeneous Arctic tundra.

We would like to thank Torre Jorgenson and Mikhail Kanevskiy for their domain expertise on permafrost feature classification. Geospatial support for this work provided by the Polar Geospatial Center under NSF-OPP awards 1043681 and 1559691. 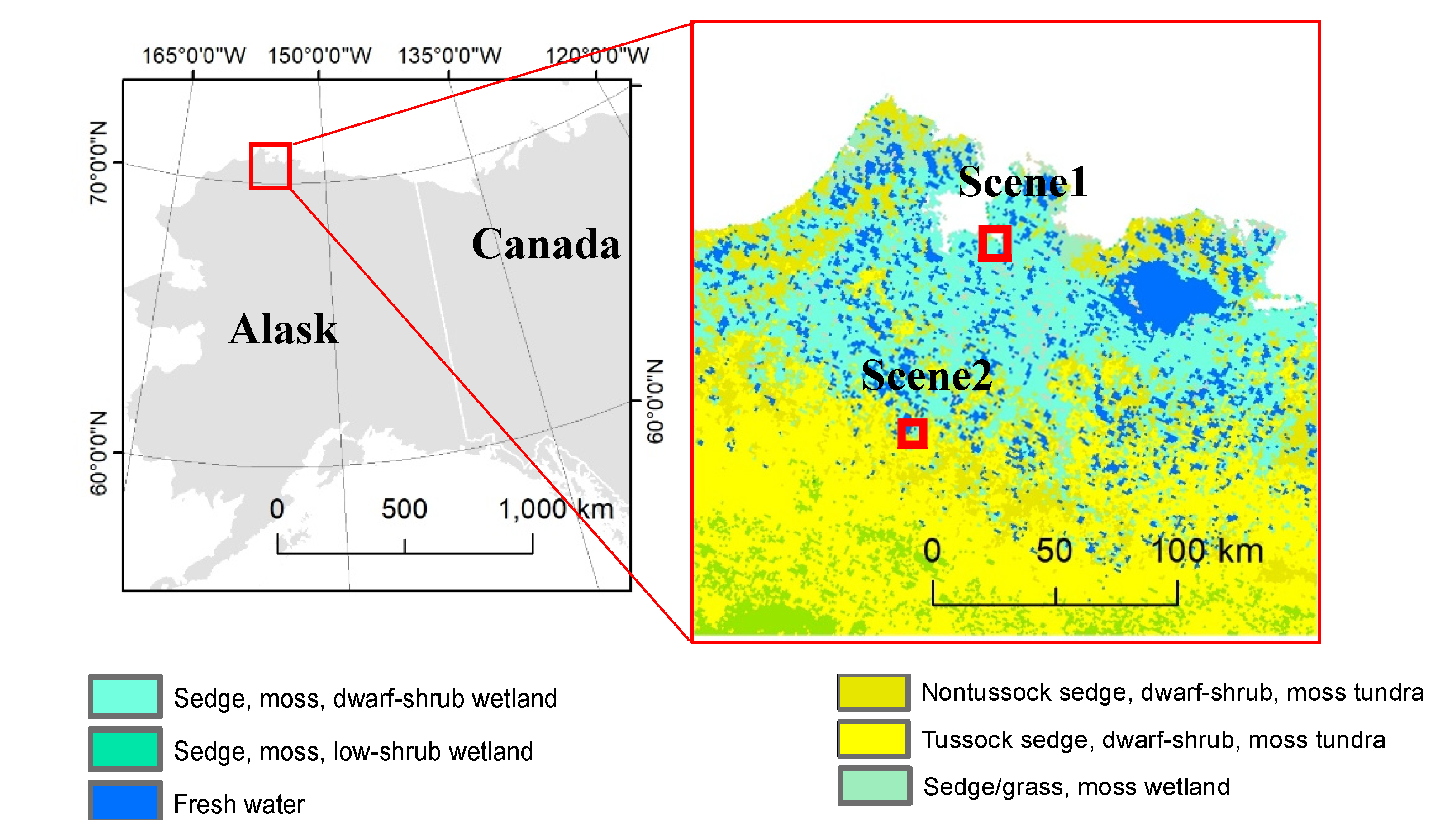 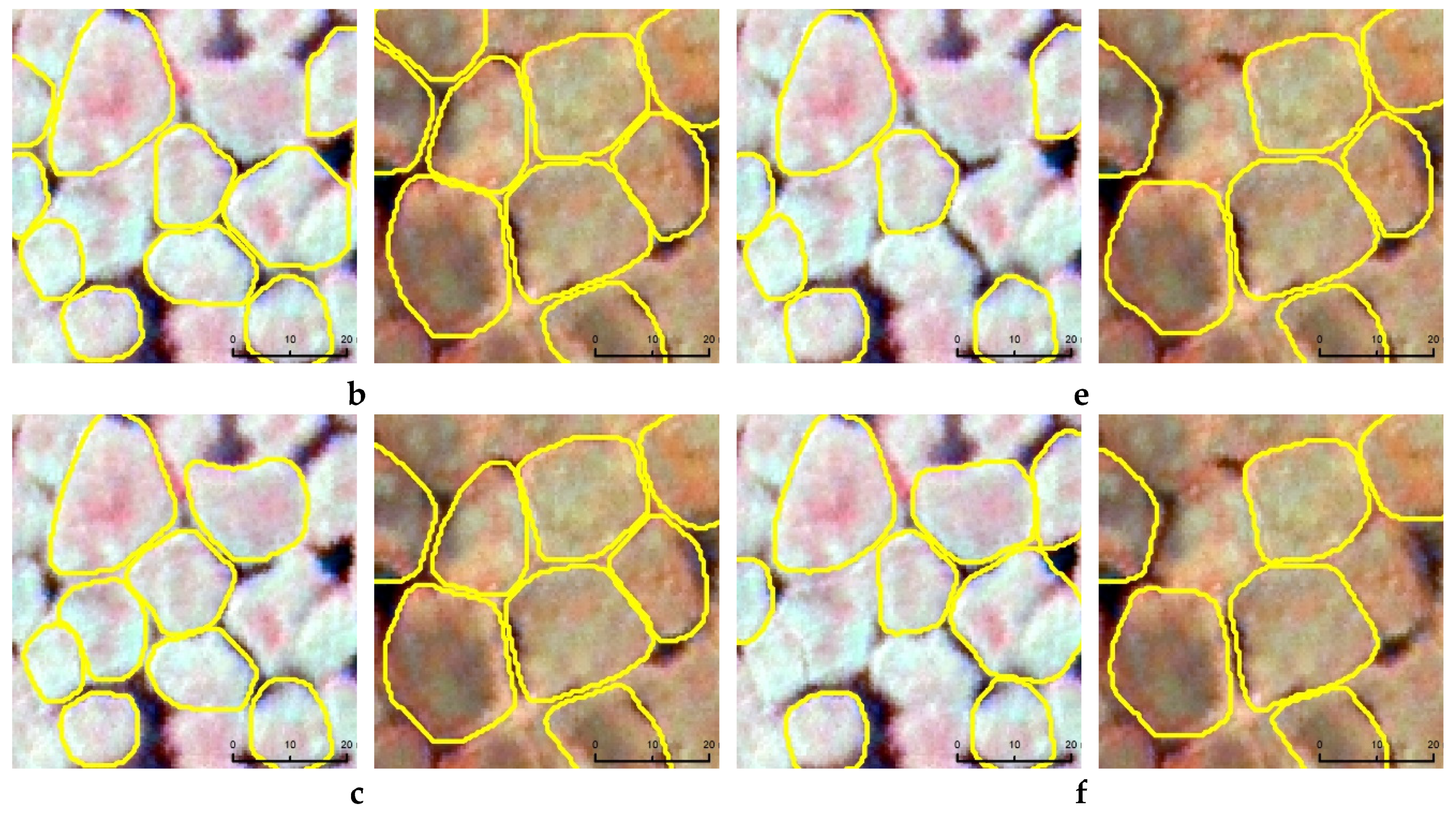