:
With increased use of light-weight materials with low factors of safety, non-destructive testing becomes increasingly important. Thanks to the advancement of infrared camera technology, pulse thermography is a cost efficient way to detect subsurface defects non-destructively. However, currently available evaluation algorithms have either a high computational cost or show poor performance if any geometry other than the most simple kind is surveyed. We present an extension of the thermographic signal reconstruction technique which can automatically segment and image defects from sound areas, while also estimating the defect depth, all with low computational cost. We verified our algorithm using real world measurements and compare our results to standard active thermography algorithms with similar computational complexity. We found that our algorithm can detect defects more accurately, especially when more complex geometries are examined.
Keywords:
active thermography; pulse thermography; thermographic signal reconstruction; depth estimation; automatic defect segmentation; defect imaging; composite material

A schematic of a PT measurement in reflection setup is shown in Figure 1a. The image shows a sample, a flash lamp and the IR camera. Often more than one flash lamp is used to achieve a spatially homogeneous excitation of the specimen surface. In Figure 1b the data format of a thermographic measurement is shown. A PT measurement can be thought of as an IR video with n frames, recorded at a sampling frequency, also called frame rate, . Since both the IR camera and the sample are stationary, it is useful to analyze the temporal evolution of all pixels, the so-called temperature–time sequence .

Heat transfer in solids via conduction is described by a partial differential equation, for the temperature as a function of space and time—the heat diffusion equation:
Given the geometry of a body, its boundary conditions and the initial condition, the temperature of a body can be calculated at any point in space at any time. The boundary condition describes how a body interacts with its surroundings. The initial condition is simply the temperature of the body at time , , for example, the ambient temperature . The thermal diffusivity, , describes ℌhow fastℍ temperature diffuses through a body. The thermal diffusivity relates material intrinsic parameters in the following way:
Here denotes the thermal conductivity, which describes how well heat energy can be transported through a body, while denotes the density. refers to the specific heat capacity, which describes how the energy relates to temperature. Analytic solutions of Equation (1) only exist for special cases. In PT for example, the excitation can be modeled by a Dirac-delta-like homogeneous heat impulse on the surface at time . For a semi-infinite homogeneous 1D slab, the slab starts at and continues to infinity. Solving the heat equation yields [23]:
Here, denotes the thermal effusivity, which describes how well heat energy can be coupled into materials. The total energy of the excitation is described by , while is the ambient temperature. In the reflection setup only the surface temperature of the slab is measured. Setting causes the exponential term to become equal to one. With the exception of carefully controlled experiments, with which the thermal effusivity can be estimated, the main takeaway is that the temperature decays proportionally to , if the ambient temperature is subtracted. This is well known and the reason why temperature–time diagrams for pulse thermography are often depicted in log–log scales.
However, non-destructive evaluation (NDE) in active thermography aims to solve the inverse problem, meaning to detect internal boundaries, i.e., defects, for a known excitation and a measured surface temperature distribution. For this problem we cannot directly use Equation (1), with which the temperature distribution of a known geometry and excitation can be calculated. However, Equation (1) can be used to show the trend of the surface temperature for a specific geometry subject to a PT excitation and to simulate noise free data for the validation of the proposed thermographic evaluation method.

2.3. Numerical Solution of the Heat Equation

3.2. Implementation of the Modification

Measurements are always subject to signal noise. Assuming that the standard deviation of the measurements is constant, after multiplying the temperature–time sequences by the standard deviation for the measurement at time is amplified by . A better solution is to use the TSR polynomial from Equation (4). It can be easily verified that the addition of the value m to the polynomial coefficient results in equivalent temperature–time sequences by direct multiplication with . Our algorithm can therefore be summarized as follows:

We evaluate the performance of our modification of TSR by examining a sample from a pre-production run. This sample includes back molding for added structural integrity. The basic layer which is 2 mm thick consists of glass fiber reinforced plastic (GFRP), while the backmolding is made up of thermoplastics. Any defects in this sample can be attributed to the manufacturing process, which was not yet optimized for this sample. A basic assumption regarding the defects was obtained by a 3D-XCT scan. The capabilities of our algorithm were analyzed using this ground truth. The front side of the sample is depicted in Figure 5a and the rear side is depicted in Figure 5b. For this sample, the resolution of the 3D-XCT was set to , which proved to be too coarse for this sample. The black rectangle, projected on the surface, indicates a region for which the resolution was set to .

We excited the sample from Figure 5a with two high powered flash lamps, each releasing approximately 1 kJ of radiative energy. The integration time of the IR camera was set to and the frame rate was . We recorded the surface temperature for 50 s at a spatial resolution of (912 × 1272) pixels. As the analog digital converter of our IR camera has a resolution of 14 bit, the measurement data have a size of 2.5 GB. Calculating the polynomial fit for each of the (912 × 1272) temperature–time sequences boils down to matrix multiplication. The so-called pseudoinverse, which is needed for the calculation of the polynomial coefficients, does not change and has to be calculated only once for the whole measurement. In fact the bottleneck of the algorithm is in calculating the roots of each polynomial, which can be formulated as an eigenvalue problem of a matrix, with n being the degree of the polynomial. The computational complexity of our algorithm is therefore , where N is the number of temperature–time sequences. It must be noted that the algorithm is highly parallelizable, since each temperature–time sequence is analyzed independently. It must be noted that the computational complexity of most PT evaluation algorithms grows linearly with the number of temperature–time sequences N, because the measurement is analyzed on a pixel by pixel basis. However, most algorithms which enable defect depth estimation rely on computationally complex regression techniques such as non-linear fitting for APST and ADMM regularization for VWC. The computational convergence of these algorithms cannot be easily quantified as they operate iteratively and stop according to a user defined stopping criterion.

In this paper, we present an extension of the thermographic signal reconstruction method for subsurface defect characterization using optical-excited pulse thermography measurement data. Comparable algorithms require either orders of magnitude more computing power, or lack the detection capability of interlaminar defects in geometrically-complex components. With the standard TSR defects are characterized by a change of the effective thermal diffusivity. However, by directly analyzing the signal characteristics of defects, i.e., the in-between thermal reflections, we can automatically segment defective from sound areas and generate defect maps. These defect maps also provide a defect depth estimate and their computational cost is inexpensive. We can easily implement the proposed method using a simple adaption to the TSR method. We validated our results using real world measurements of a sample from a pre-production run, where a basic assumption of the defects was obtained by 3D X-ray computed tomography. We compared the results of our algorithm to TSR and the pulsed phased thermography and found that our algorithm is very sensitive to defects close to the surface, which might not be structurally integral. Future work could focus on incorporating artificial intelligence, e.g., convolutional neural networks, for further improving the defect detection capabilities based on the features presented in this work.

The financial support by the Austrian Federal Ministry for Digital and Economic Affairs; the National Foundation for Research, Technology and Development; and the Christian Doppler Research Association is gratefully acknowledged. Financial support was also provided by the Austrian research funding association (FFG) under the scope of the COMET programme within the research project “Photonic Sensing for Smarter Processes (PSSP)” (contract number 871974). This program is promoted by BMK, BMDW, the federal state of Upper Austria and the federal state of Styria, represented by SFG. 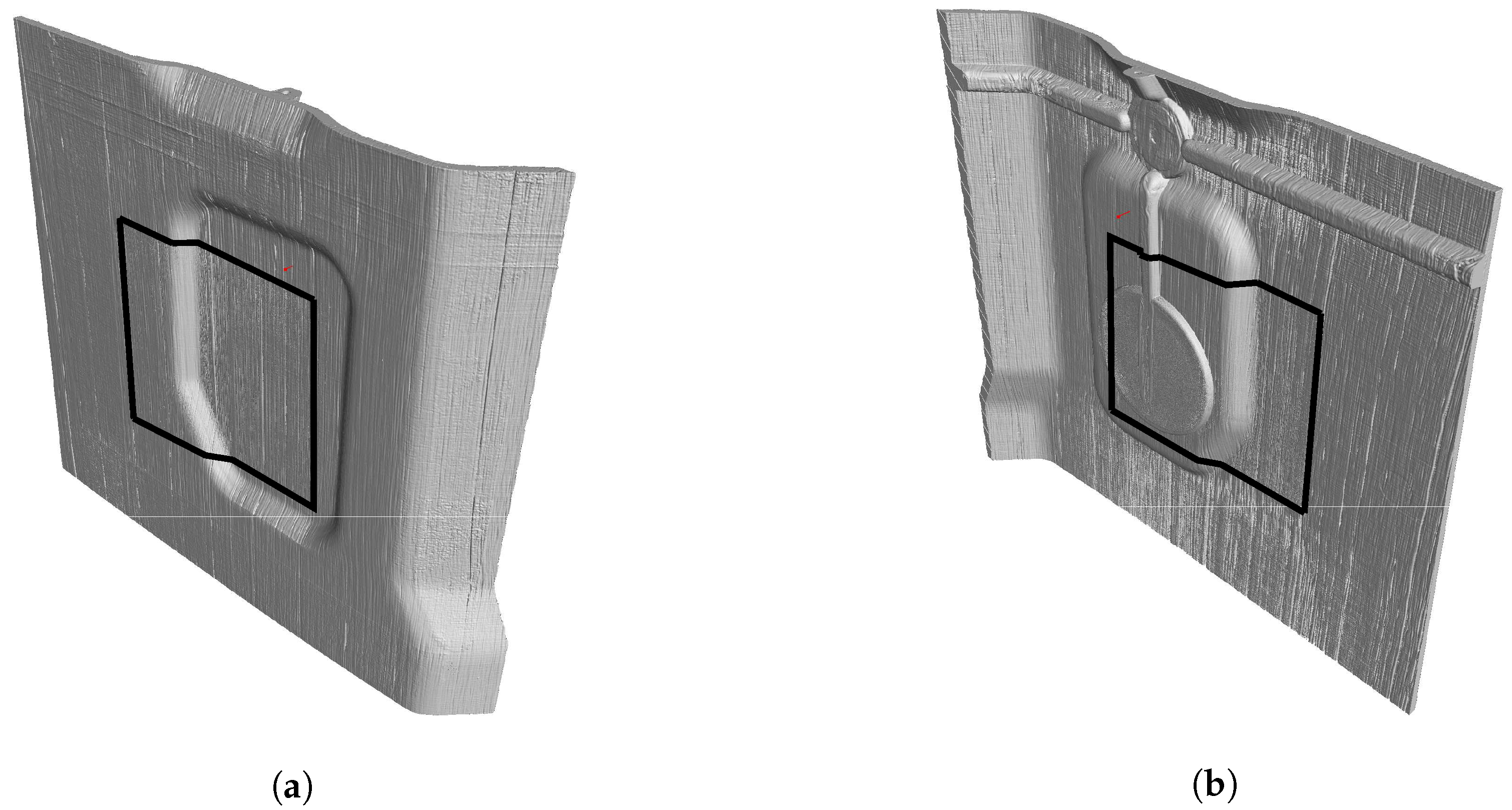