Composites of recycled high-density polyethylene and micro fibres of sugarcane bagasse were studied, in order to create an upcycled material to produce masonry bricks. We ranged the polymer/filler ratio from 100–0 to 60%–40%. The materials were assessed through scanning electron microscopy, thermogravimetry/derivative thermogravimetry, differential scanning calorimetry, rheological measurements and compressive strength test. The composites showed a good dispersion and adhesion of the filler into the polymeric matrix. There was no significant variation on the melting and crystallizing temperatures of the materials if compared to those of neat polymer, indicating that there was no relevant change in the average size of the polymeric crystals. We assumed that some transcrystallization has happened, because the degree of crystallinity of the composites increased to all filler contents, while the crystallizing temperature remained the same. There was a rise in the compressive moduli of the composites, ranging from 37% to 63%. The modulus at the crossover point and the complex viscosity also rose due to the fibres ratio. The results show that the combination of these materials led to the reinforcement of the compressive strength of the polymer, and have interesting properties as a potential building material.
Keywords: polymer composite; high-density polyethylene; compressive strength; rheology; recycling; sustainability polymer composite; high-density polyethylene; compressive strength; rheology; recycling; sustainability

The search for sustainable solutions is visible in all sectors of human activity [1,2]. It is increasingly recurrent for contemporary society to consider environmental issues in the developments in science and technology. The concern about the preservation of natural resources—as a consequence of the awareness of its finitude—makes itself present in several fields of academic research. Studies lead to new polymeric materials, which can provide a sustainable destination for synthetic waste with which nature cannot address [3,4,5,6]. Transforming large scale waste into a commodity product would deal with both environmental and economic issues [7,8]. In addition, upcycling materials can be more sustainable than recycling them [9,10]. The construction industry is the second largest market of polymers as raw material [11]. The numbers point out that 40%–75% of natural resources and 40%–44% of the energy produced on the planet are consumed by this activity [12,13,14]. This could be an interesting field to develop solutions using recycled polymeric materials, as Conroy and co-workers noticed in 2006 [15].
Regarding the Brazilian market, high density polyethylene (HDPE) is one of the most widely used polyolefins, and represents the biggest volume (37%) of urban plastic waste [16]. In addition, sugarcane bagasse (SCB) is one of the many natural fibres considered a large-scale waste; 90% of this material is used in very primary ways (livestock feed, or fuel for thermoelectric generators). If ever used as input for a building material, this same fibre would gain more valuable applications. In a former work, our research group tried to develop a synthetic paper, using virgin HDPE and SCB [17]. By that time, we noticed the high compressive resistance of those composites. Later, we developed another material using a different fibre (which resulted in inert filler) [18,19,20]. From this point of view arose the idea of using recycled HDPE (rHDPE) and SCB to create a reinforced material for the construction industry. The choice for recycled HDPE led us to find in literature other interesting information about the use of this polyolefin as building material—more specifically, as a material resisting to compressive strength. As stated by Bozorg-Haddad and co-workers when studying compressive strength and creep of polymeric piling made of recycled HDPE [21], in compressive loading, the cross-section of polymeric materials increases; consequently, the stress tends to decrease. Even if not used for structural purposes, a brick made of this polymer (HDPE with SCB) would tend to become tougher over time. This improvement on the mechanical properties of the brick would be obtained just due to the nature of the creep behaviour of HDPE, without further chemical or physical treatments in the polymer. Therefore, the aim of this work was to assess the feasibility of using rHDPE/SCB composites as material for masonry bricks.

The materials used were recycled HDPE (rHDPE), in the shape of pellets, having a density of 0.973, and melt flow rate (MFR) of 2.589 ± 0.209 g·10 min−1, donated by the COMBRARE recycler (Manufacturer, City, Country); the sugarcane bagasse (SCB) was donated by HC Sucroquímica sugarcane plant (Campos dos Goytacazes, Rio de Janeiro, Brazil). The latter was used without any previous chemical treatment and then grinded and sifted using a sieve with 32 mesh, according to the ASTM C136 [20]. The SCB micro fibre that passed through the sieve was used in the composites. Before processing, both materials were dried overnight in a vacuum oven at 80 °C.

Four composites were prepared (100–0, 80–20, 70–30 and 60–40), the filler ratio ranging from 0 to 40%. The materials were dried overnight in a vacuum oven at 80 °C, and then compounded in a Teck Tril® co-rotating twin-screw extruder (Length/Diameter ratio of the screw = 36, screw diameter = 22 mm), equipped with a vacuum system, model DCT-20. The processing parameters were: temperature profile of 70, 100, 150, 160, 170, 180, 190, 200 and 200 °C; die temperature of 200 °C; extrusion speed of 300 rpm; feeder speed of 20 rpm. The thermogravimetry/derivative thermogravimetry and differential scanning calorimetry analysis were performed over grinded pellets. Scanning electron microscopy was performed over laminates, obtained by compression moulding in a heated press at 200 °C, and 3 MPa, for 5 min, and then cooled down in a press at 25 °C, and 3 MPa, for 5 min. The specimens for compressive resistance test were injection moulded into cylinders of 20 mm height and 10 mm diameter, using an Arburg® All Rounder 420C 800-250 equipment (City, Country). The processing parameters were: temperature profile of 185/185/185/185 and 185 (nozzle) °C; clamping force of 80 kN; holding pressure of 200 MPa, mound temperature of 105 °C; holding pressure time of 12 s; closed mound time of 30 s; and injection cycle time of 50 s. The molten material was injected using 245 MPa pressure, and speed of 0.7 cm3·s−1. Injection branches of cylinders were removed using a EMCO® Maximat V13 lathe.

The TG/DTG analysis was performed using TA equipment model Q500. The temperature range was from 30 to 700 °C, at heating rate of 10 °C·min−1, under nitrogen atmosphere. We measured the mass loss, initial (Tonset), maximum speed (Tmax) and final (Tfinal) degradation temperatures.

The DSC analysis was performed using TA equipment Q1000 model. The samples were analysed under nitrogen atmosphere, according to the following cycles: in the first cycle, the sample was heated from 20 to 200 °C, at a heating rate of 10 °C·min−1, keeping the material at 200 °C for 1 min; the second cycle was done using a cooling rate of 10 °C·min−1, until 20 °C; at the third cycle, the same temperature range and heating rate of the first cycle were applied. The cooling crystallization temperature (Tc) was obtained considering the cooling curve. The crystalline melting temperature (Tm) and the degree of crystallinity (Xc) of the HDPE were obtained considering the second heating curves. The Xc was determined based on the ratio between the melting enthalpy (ΔHm) of the HDPE in the composite and the 100% crystalline HDPE (290 J·g−1), adjusted according to the content of polyolefin in the composite.

Compressive strength test was performed according to ASTM D 695 [22], in a Zwick universal tester 1485 model, using a 250 kN load cell, test speed of 1.3 mm·min−1, until 20% deformation. This test was held at New Materials Centre of Bayreuth, at Bayreuth, Germany.

The rheological measurements were performed in the molten state, in a parallel plate rheometer (diameter 25 mm, gap 1 mm) TA Instruments, model AR 2000, in oscillatory shear mode (200 °C, N2 atmosphere). Tests of deformation variation were made to obtain the linear viscoelastic region, at the angular frequency (ω) of 6.28 rad·s−1. The storage (G′) and loss (G′′) moduli and the complex viscosity (η*) were determined considering the linear viscoelastic region of the material, in the frequency range between 0.6 and 500 rad·s−1.

Considering the aim of the study—recycling polymeric waste materials to produce building materials—we concluded that SCB has actually improved the compressive strength of the neat rHDPE. There was a good dispersion and adhesion between polymer and filler—shown in the SEM images—probably due to the presence of lignin in the non-treated SCB. This is an important aspect for the resistance to compressive stress and is just a consequence of the choice for not making any chemical treatment on the fibre (in order to avoid the creation of pollutant effluents). Regarding the thermal properties, the TGA showed that the composites could be used to produce average HDPE artefacts, within the usual temperature of neat polymer. The DSC analysis pointed out an increase in the Xc of the polymer—related to the transcrystallization furthered by the SCB over regions of uncrystallized polymer in the matrix—which may have reinforced the already strong mechanical properties of this kind of polyolefin. The SCB has actually improved the compressive strength of the neat rHDPE. As the rheological measurements showed no abnormality, the anomalous result of the secant modulus of 70–30 composite could be explained by inhomogeneous compounding and/or injection moulding of this specimen in particular or by measurement/calibration error of the universal testing machine during the compressive strength test of this specimen in particular.
The rheological measurements showed that the composites were more resistant to deformation than the neat polymer in the melt state, but they would probably be processed at the average processing conditions of HDPE artefacts (high shearing rates). Therefore, we conclude this material has achieved enough properties to be used as a sustainable and easy-to-make building material.

The authors thank the Conselho Nacional Desenvolvimento Científico e Tecnológico (CNPq), the Coordenação de Aperfeiçoamento de Pessoal de Nível Superior (CAPES), the undergraduate students Jair B. Gabriel (Materials engineering, UFRJ) and Gabriel C. B. Avila (Chemical engineering, UFRJ) for their work in this research, and to the Nosso Futuro Comum blog community headed by the economist Hugo Penteado (for fostering crowdfunding to buy equipment to our research line) for supporting this research. 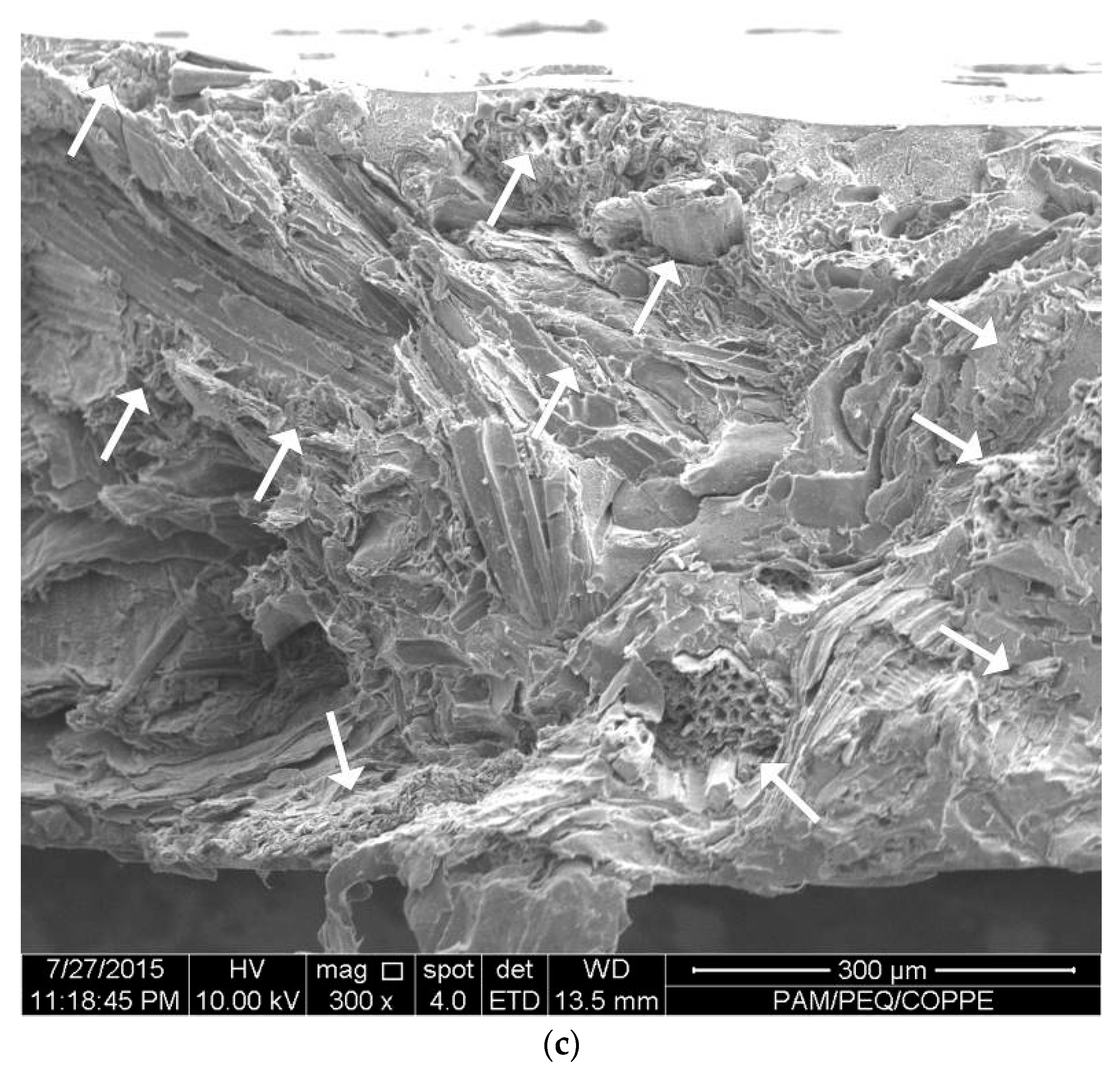 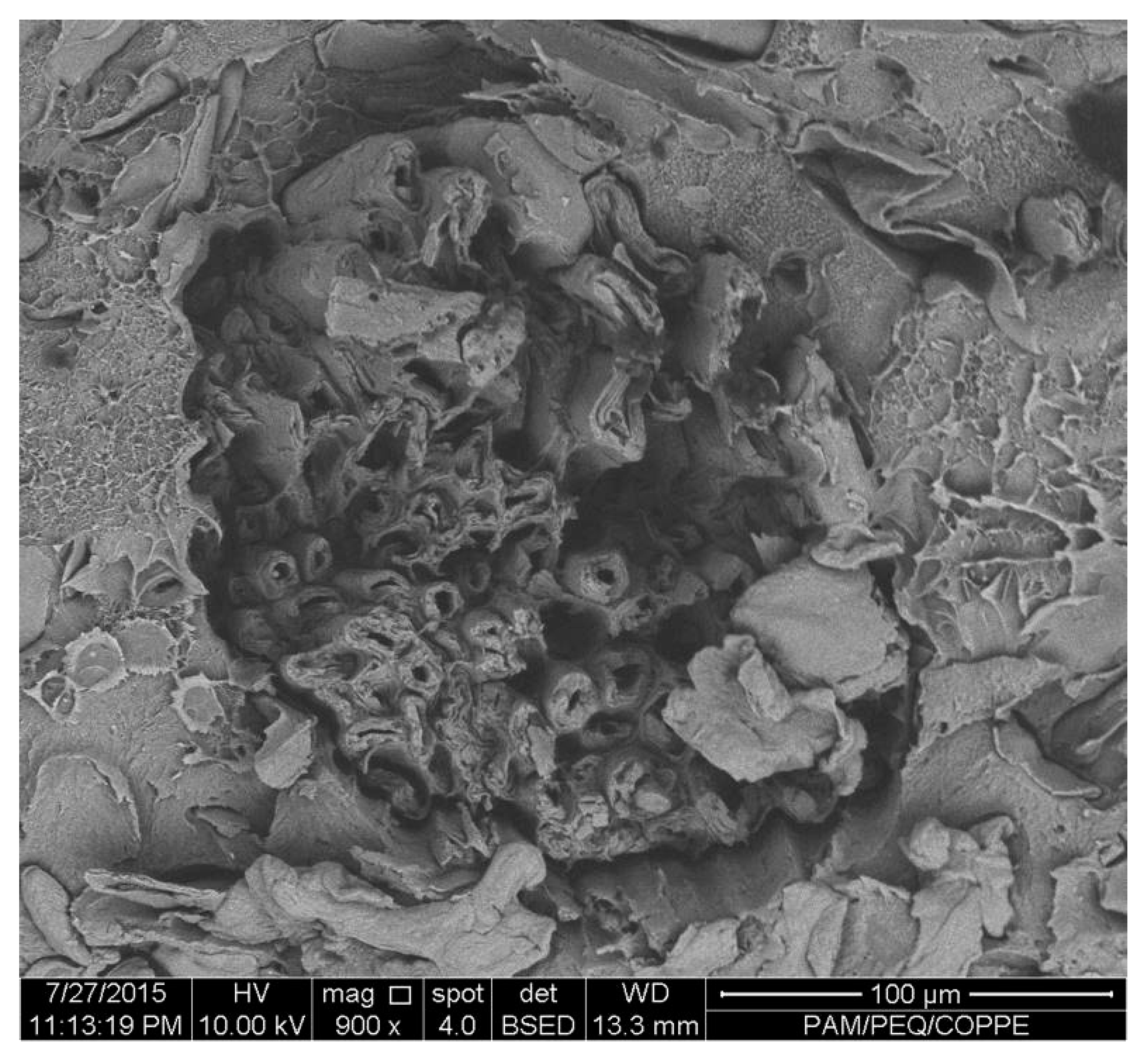 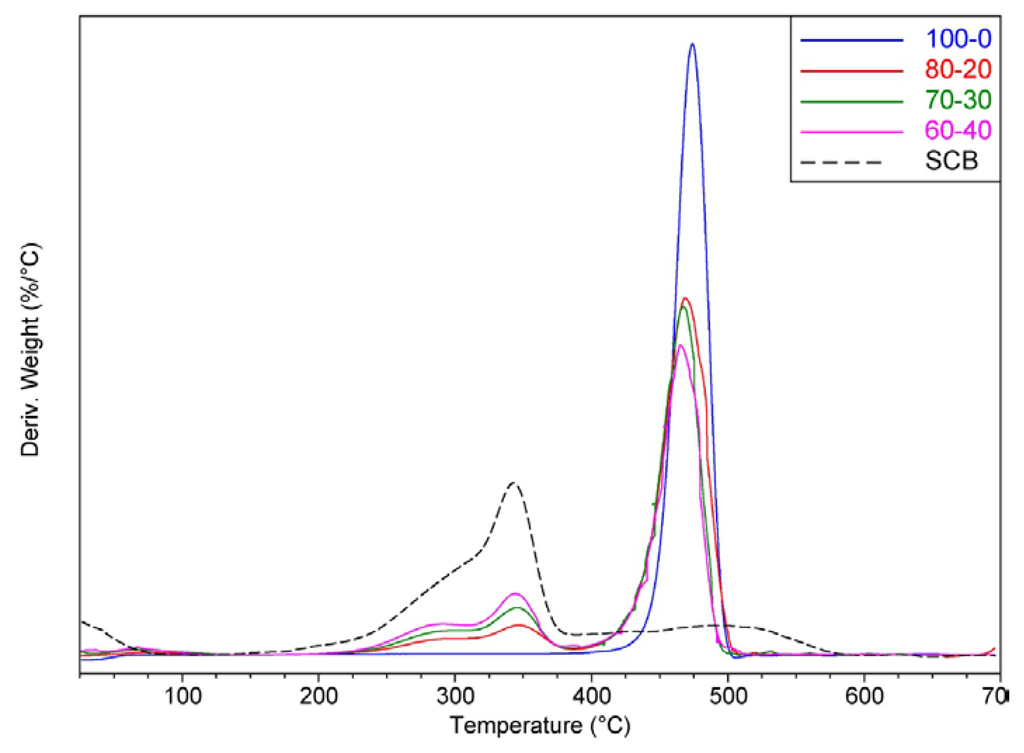 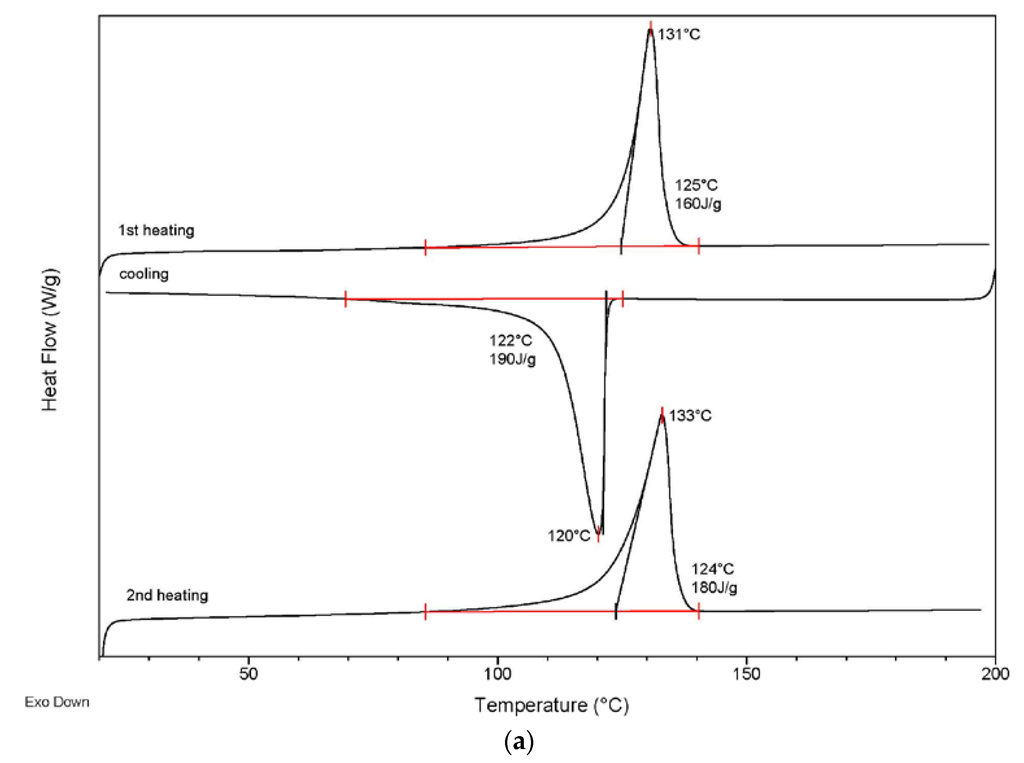 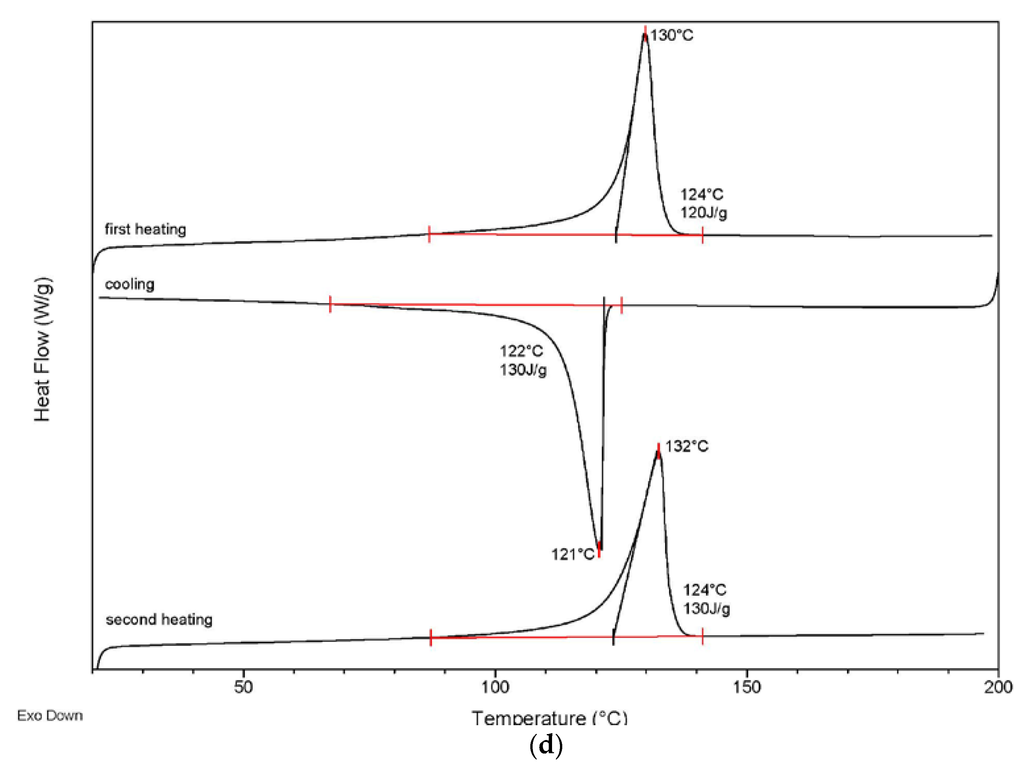 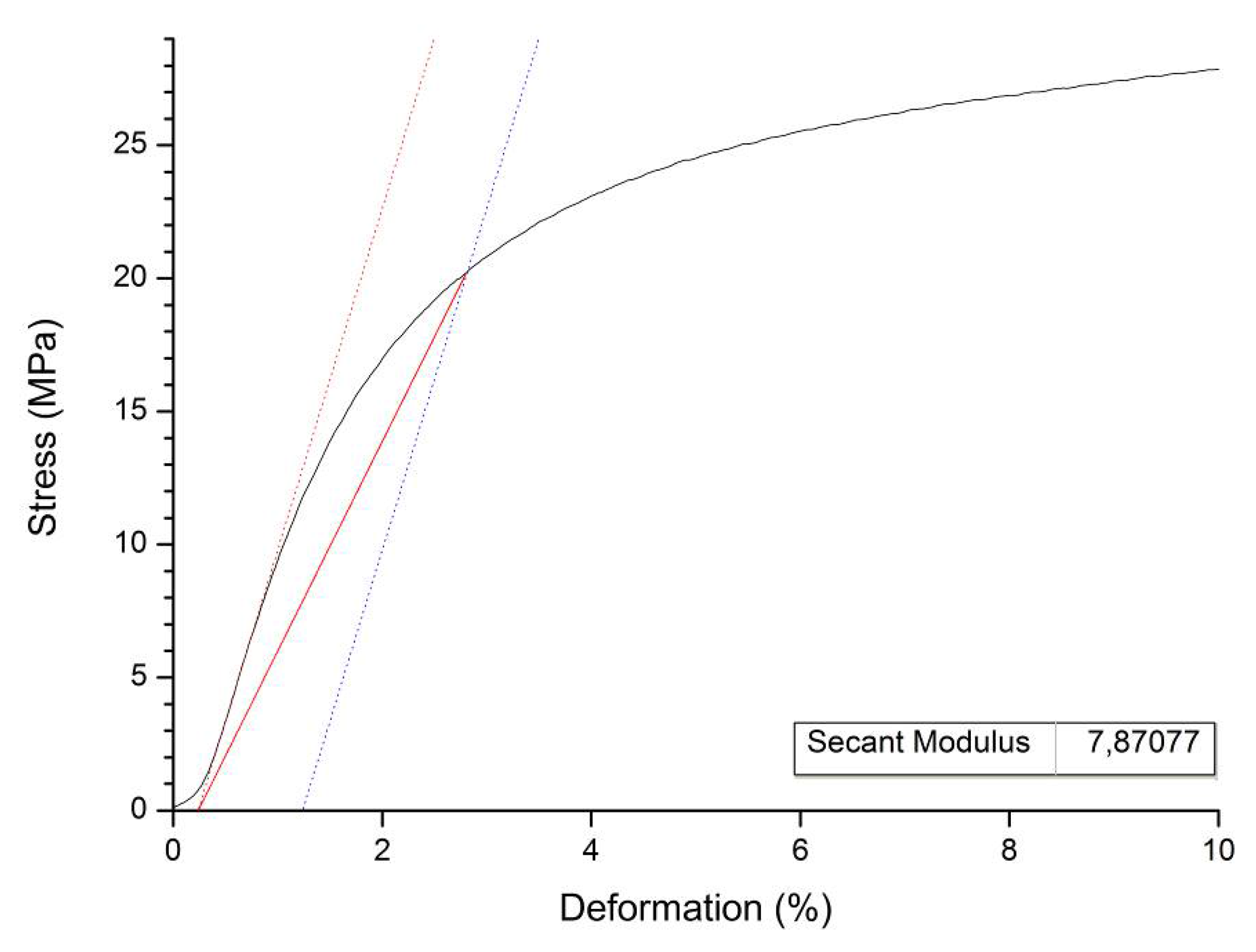 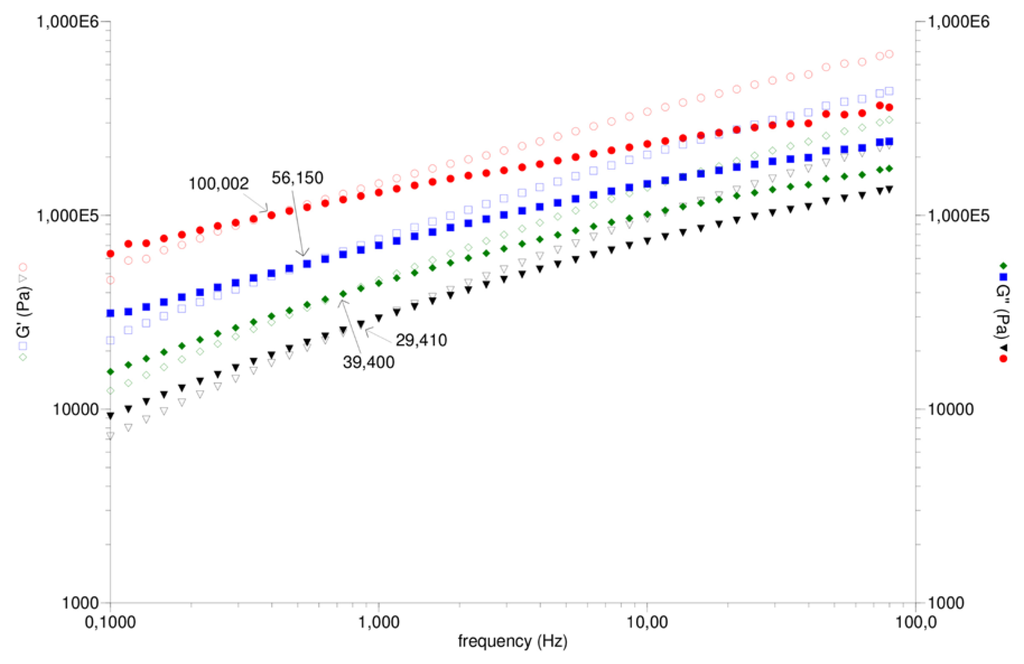 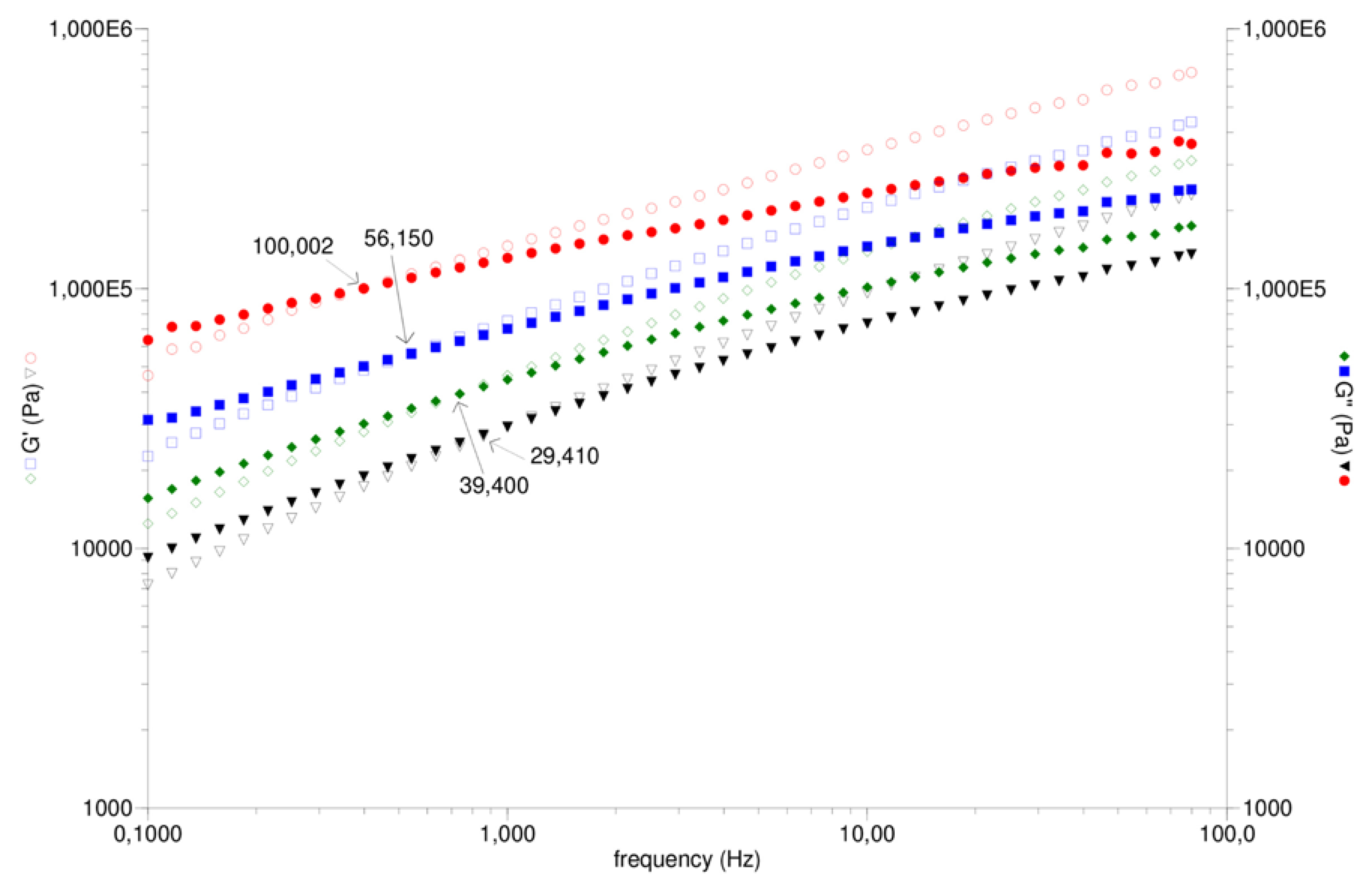