Can the Double Exchange Cause Antiferromagnetic Spin Alignment?
Next Article in Special Issue

Exploring the Effects of Synthetic and Postsynthetic Grinding on the Properties of the Spin Crossover Material [Fe(atrz)3](BF4)2 (atrz = 4-Amino-4H-1,2,4-Triazole)
Previous Article in Journal

The transfer of the inherent bistability of spin crossover compounds to surfaces has attracted considerable interest in recent years. The deposition of the complexes on surfaces allows investigating them individually and to further understand the microscopic mechanisms at play. Moreover, it offers the prospect of engineering switchable functional surfaces. We review recent progress in the field with a particular focus on the challenges and limits associated with the dominant experimental techniques used, namely near-edge X-ray absorption fine structure (NEXAFS) spectroscopy and scanning tunneling microscopy (STM). One of the main difficulties in NEXAFS-based experiments is to ascertain that the complexes are in direct contact with the surfaces. We show that molecular coverage determination based on the amplitude of the edge-jump of interest is challenging because the latter quantity depends on the substrate. Furthermore, NEXAFS averages the signals of a large number of molecules, which may be in different states. In particular, we highlight that the signal of fragmented molecules is difficult to distinguish from that of intact and functional ones. In contrast, STM allows investigating individual complexes, but the identification of the spin states is at best done indirectly. As quite some of the limits of the techniques are becoming apparent as the field is gaining maturity, their detailed descriptions will be useful for future investigations and for taking a fresh look at earlier reports. View Full-Text
Keywords: spin crossover; single molecule; surfaces; scanning tunneling spectroscopy; near-edge X-ray absorption fine structure spin crossover; single molecule; surfaces; scanning tunneling spectroscopy; near-edge X-ray absorption fine structure
►▼ Show Figures 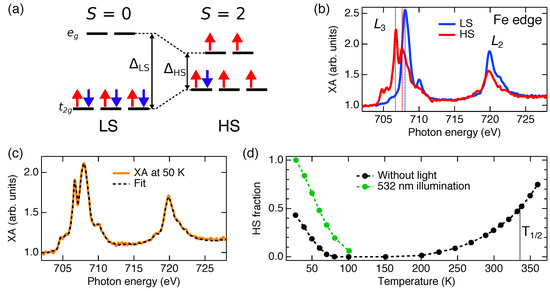