An experiment was conducted to evaluate the effects of leaching fraction (LF) on the longevity of controlled-release fertilizer (CRF) and leachate nutrient content in a pine bark substrate. The effect of LF-based irrigation was evaluated under six target LFs of 0.05, 0.15, 0.25, 0.35, 0.45, and 0.55. The 2.72 L nursery pots were filled with 100% pine bark substrate amended with dolomitic lime at a rate of 2.97 kg/m3 and Harrell’s 16-6-13 POLYON® applied at a rate of 6 g per container. Fertilizer was encased in vinyl-coated fiberglass mesh bags and subdressed 2.5 cm under the substrate surface for recovery at the end of 10 weeks. The total amount of nutrients leached from the container was greater at higher LFs, with twice as much inorganic nitrogen leached at a LF of 0.55 than a 0.15 LF. The amount of dissolved nutrients left in the substrate decreased as the LF treatments increased. There were 29.6% more inorganic nitrogen and 37.7% more phosphorus left in the substrate irrigated with a 0.15 LF as compared to a 0.55 LF. This suggests that at lower LFs, more dissolved nutrients may be available for plant uptake. No differences were seen in the amount of nutrients lost from the CRF or remaining in the prills. Results indicate that reducing the LF did not influence the longevity of POLYON® CRF in a pine bark substrate, but that a lower LF may be useful in reducing nutrient runoff into the environment. Targeting a lower LF also resulted in a larger pool of plant-available nutrients, allowing nursery producers to potentially reduce fertilizer rates. View Full-Text
Keywords: nitrogen; CRF; substrate; container production; nursery production; effluent; runoff nitrogen; CRF; substrate; container production; nursery production; effluent; runoff
►▼ Show Figures 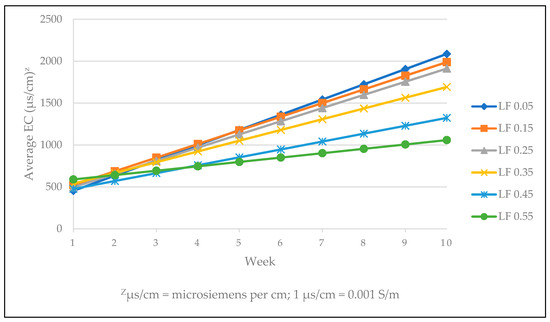