The Occurrence of Shiga Toxin-Producing E. coli in Aquaponic and Hydroponic Systems

:
An automated method of determining tree water status would enable tree fruit growers, foresters and arborists to reduce water consumption, reduce orchard maintenance costs and improve fruit quality. Automated measurements could also be used to irrigate based on need rather than on fixed schedules. Numerous automated approaches have been studied; all are difficult to implement. Electromagnetic sensors that measure volumetric water content can be inserted in tree trunks to determine relative changes in tree water status. We performed automated measurements of dielectric permittivity using four commercially available electromagnetic sensors in fruit tree trunks over the 2016 growing season. These sensors accurately measure the ratio of air and water in soils, but tree trunks have minimal air-filled porosity. The sensors do respond, however, to bound and unbound water and the relative change in the output of the sensors thus provides an indication of this ratio. Sapwood is the hydro-dynamically responsive component of trunk anatomy and is nearest the bark. Sensor response improved when the waveguides were exposed to a greater percentage of sapwood. Irrigation-induced increases of approximately 0.5 MPa in stem water potential were associated with 0.5 unit increases in dielectric permittivity. Electromagnetic sensors respond to bound water in trees and thus have the potential to indicate tree water status, especially when the sensor rods are in contact with sapwood. Sensor modifications and/or innovative installation techniques could enable automated measurements of tree water status that could be used to precision irrigate trees.
Keywords:
water potential; tree water status; TDR; fruit trees; peaches; trunk hydration; electromagnetic sensors; dielectric permittivity; water stress; drought stress

Monitoring stem water potential is an effective method for determining tree water status [1], but the method requires much expertise and cannot be automated. Measurements are also limited to the time period nearest to solar noon. An automated method of determining tree water status would allow for the irrigation of orchards based on tree water status, rather than on fixed schedules. Irrigation based on water status could save water, reduce orchard maintenance costs [2,3,4] and improve water productivity [5,6]. Soil moisture measurements could be effective, but the depth and distribution of tree roots make this method impractical. Several researchers have inserted time domain reflectometry (TDR) and other electromagnetic sensors into wood to determine water content. These sensors have been used to determine the water storage capacity of native conifer trunks [7,8,9,10,11,12] and to evaluate xylem cavitation [13].
There are several challenges in determining trunk hydration using TDR. Holbrook et al. [14] cautioned that temperature effects in wood could make TDR measurement of trunk hydration more complicated and that waveguide length could also adversely affect these measurements. They suggested using a waveguide length similar to the radius of the stem. A custom calibration equation relating permittivity to water content may also be necessary [14,15]. In addition, dielectric permittivity is temperature-dependent. When electromagnetic sensors are installed to measure soil water potential, the electronics are generally buried, reducing the potential effects of fluctuations in temperature on both the sensor electronics and the dielectric permittivity. When installed in trees, temperature fluctuations may have a greater effect on water potential readings.
Nadler et al. [16] concluded that TDR could determine stem hydration in lemon and mango [15], but that the signal was too noisy and the system too expensive for managing orchard irrigation. Despite the fact that the system was too expensive for agricultural use [16], its use in research continued. Kumagai et al. [17] found that amplitude domain reflectometry (ADR) sensors bolstered predictions of stomatal conductance. Like TDR sensors, ADR sensors can determine the water content of wood, based on the apparent dielectric permittivity.
The technological advances with TDR (and other electromagnetic volumetric water content) sensors have occurred as Nadler et al. [15] predicted, making the sensors more reliable and cheaper. Garrity [18] suggested using the Decagon GS3 sensor in the trunks of trees to monitor hydration. Using this technique and sensor, Matheny et al. [19] were able to measure the trunk water content of red oak and red maple forest trees. Similar work was done on birch trees by Hao et al. [20], with the exception that the focus was on xylem cavitation. Most recently, Saito et al. [21] demonstrated the utility of electromagnetic sensors in determining the water content of native and invasive trees in arid environments.
In this study, we used four models of electromagnetic soil moisture sensors, inserted into the trunks of fruit trees to test their ability to determine changes in trunk hydration associated with irrigation stress. If electromagnetic sensors can detect changes in trunk hydration, they could be used to automate orchard irrigation and facilitate precision irrigation.

GS3 permittivity output generally decreased between irrigations and recovered following them. A degree of recovery was immediately detectable, but recovery continued for four or five days following irrigation. Then permittivity values began to decline again (Figure 4A).
CS655 permittivity values decreased between every irrigation and recovered following the irrigation with the exception of a single sensor which did not respond as expected between the irrigations on July 5 and July 28. Similar to the GS3, permittivity values showed immediate recovery, but increased over the following four to five days before declining again (Figure 4B).
TDR-315(L) permittivity responded similarly to the other two sensors. After the 5 July irrigation, all sensors detected trunk dehydration between irrigations and recovery of trunk hydration immediately after irrigation with continued recovery for four to five days afterward (Figure 4C).
Changes in permittivity before and after irrigations were small (<1 permittivity unit) for each model of sensor. CS655 sensors recorded the largest difference in permittivity, followed by GS3 sensors and TDR-315 sensors (Table 2).
Stem water potential varied and r2 values for correlations with trunk permittivity ranged from r2 = 0 to r2 = 0.17 for GS3 sensors, from r2 = 0.01 to r2 = 0.26 for CS655 sensors and from r2 = 0.03 to r2 = 0.29 for TDR-315(L) sensors.
Despite the fact that the relationship between contact with the sapwood and sensor response was not overly robust (r2 = 0.41, p = 0.13 for TDR-315(L); r2 = 0.27, p = 0.23 for CS655; r2 = 0.20, p = 0.27 for GS3) for any of the sensors, the sensor response increased as the percentage of the sensor waveguide in contact with the sapwood increased (Figure 5).
Diurnal fluctuations in permittivity can be observed in the sensor data. Pre-installation tests of each sensor’s electronics revealed very little sensitivity to temperature for all sensors. Of the ten sensors tested (2 GS3s, 3 CS655s, 2 TDR-315s and 3 TDR-315Ls), only four sensors responded to temperature. For the two GS3 sensors, the response was +0.0011 and +0.0051 permittivity units per degree Celsius. For the two TDR-315 sensors the response was even smaller (−0.00014 and +0.00015 permittivity units per degree Celsius). All three CS655s and all three TDR-315Ls tested show no response to temperature (see supporting information). Temperature sensitivity tests of the sensors installed in the cut sections of the trees revealed very little temperature sensitivity. The average slope for GS3 sensors was −0.0165 units of permittivity per degree Celsius while the slopes for the CS655 and TDR-315(L) were −0.0012 and 0.015, respectively.
For field data, the average slope of temperature and permittivity relations for all GS3 data is −0.037 units of permittivity per degree Celsius. The slopes for the CS655 and the TDR-315(L) are −0.012 and −0.003, respectively. This is much less than the expected value.
Focusing on one week’s data revealed that permittivity decreased in the afternoons and increased during the night and morning. Fluctuations of nearly one permittivity unit were observed for some sensors (Figure 6). 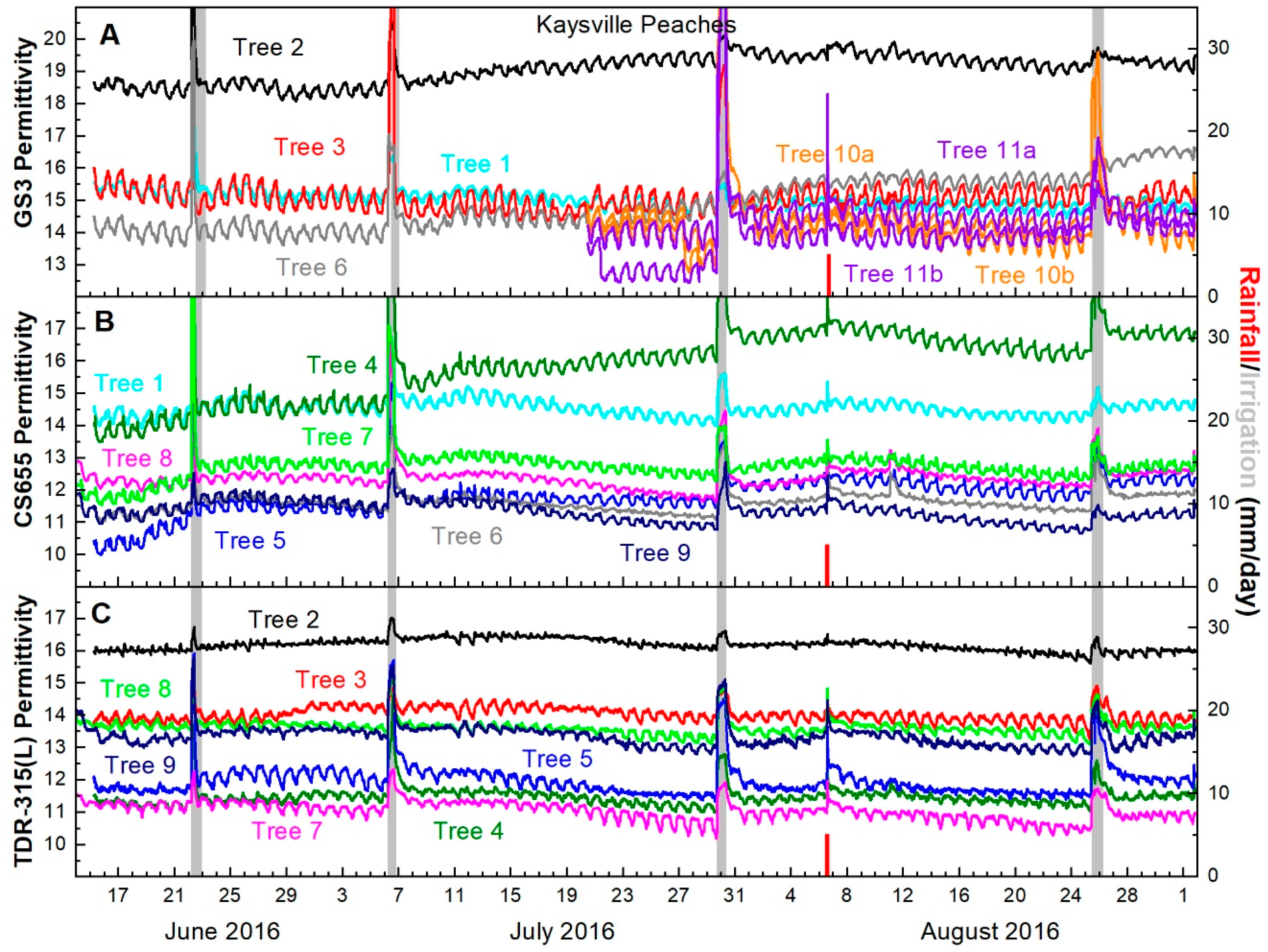 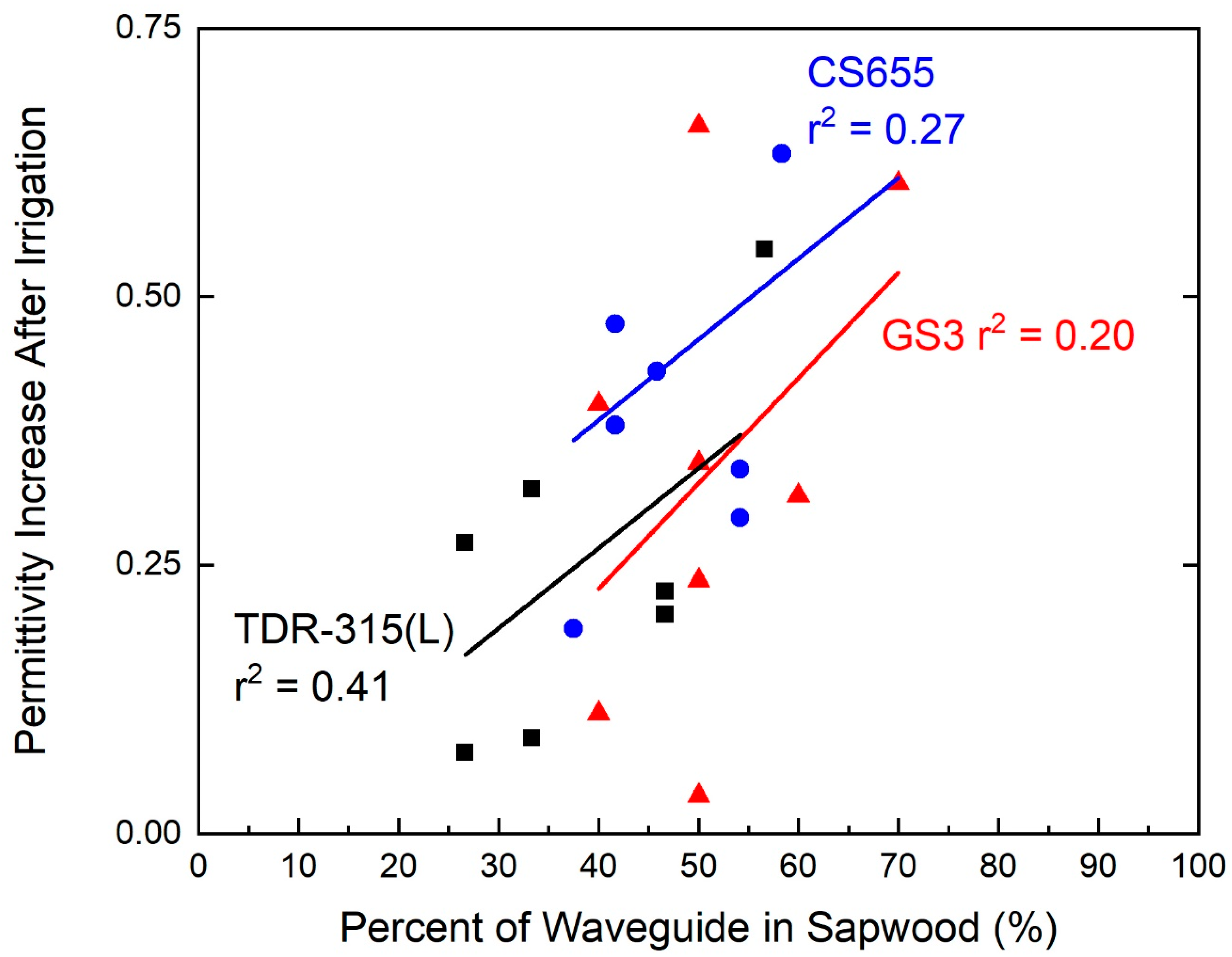 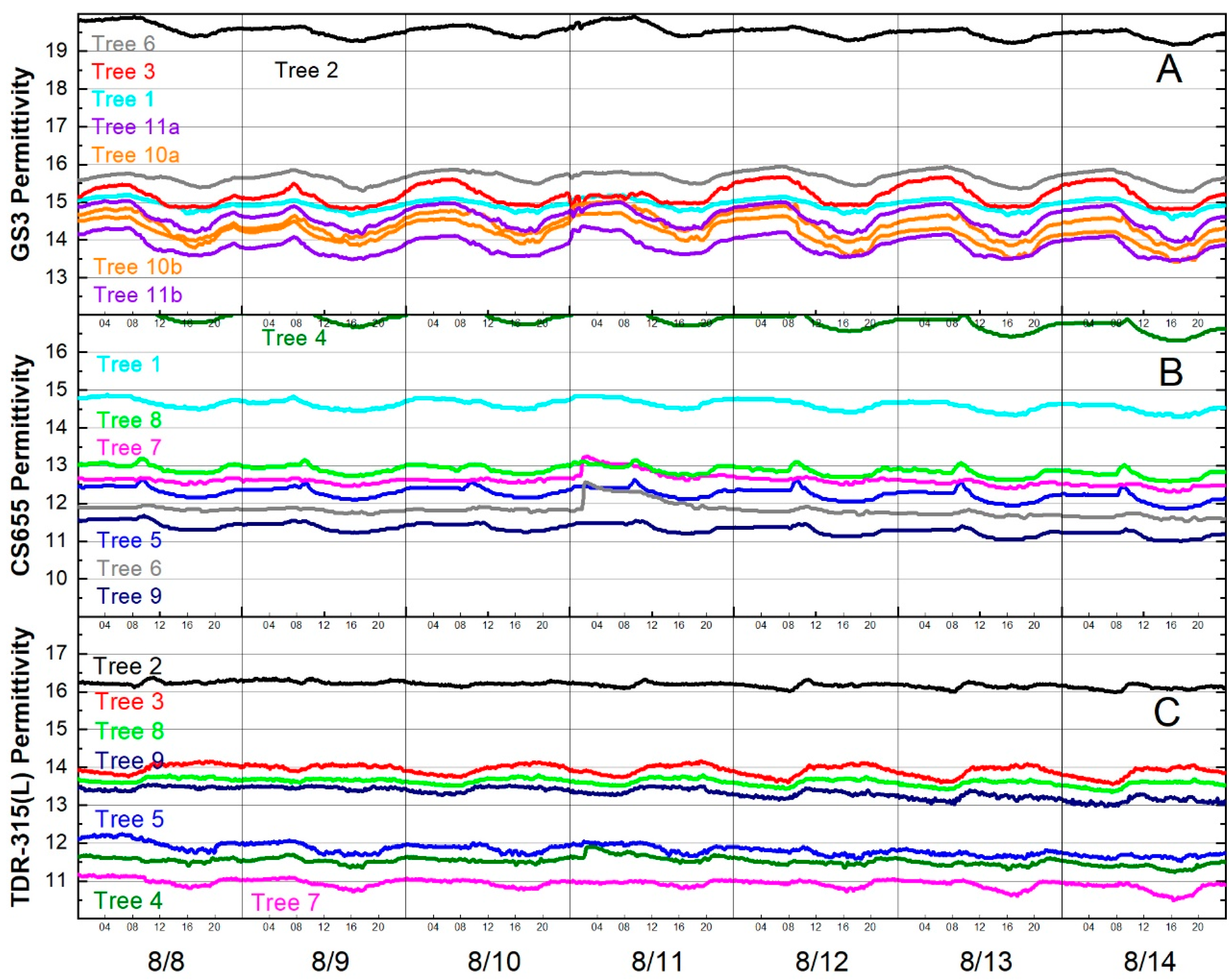