The objective of this study was to determine if the application of two antitranspirant compounds would moderate water deficit stress effects on physiological responses of “Granny Smith”, “Royal Gala” and “Golden Delicious” apple (Malus domestica Borkh.) trees on MM106 rootstock that occur during deficit irrigation. Uniform trees were grown in pots under water supply regimes of 30%, 60%, and 80% depletion of available water (DAW) before irrigation to runoff and received applications of kaolin particle film (PF) or abscisic acid (ABA) at 0, 30 and 60 days. At 120 days, genotype and deficit irrigation affected nearly all leaf traits, but antitranspirant treatment had no significant effects. As the % DAW increased, the net photosynthetic rate (Pn), transpiration rate (T), stomatal conductance, leaf water and pressure potential, variable-to-maximal chlorophyll fluorescence, leaf number, and leaf N, P and K contents were reduced. A significant genotype by deficit irrigation interaction was evident on T, water use efficiency (WUE), and leaf osmotic pressure potential. A significant deficit irrigation by antitranspirant interaction was evident on only leaf Pn, with PF and ABA reducing it at 30% DAW and only PF reducing it at 80% DAW. However, the periodic use of PF or ABA during deficit irrigation did not alleviate most physiological effects of water deficit stress due to deficit irrigation. View Full-Text
Keywords: water deficit; kaolin; abscisic acid; leaf gas exchange; leaf water relations; chlorophyll fluorescence water deficit; kaolin; abscisic acid; leaf gas exchange; leaf water relations; chlorophyll fluorescence
►▼ Show Figures 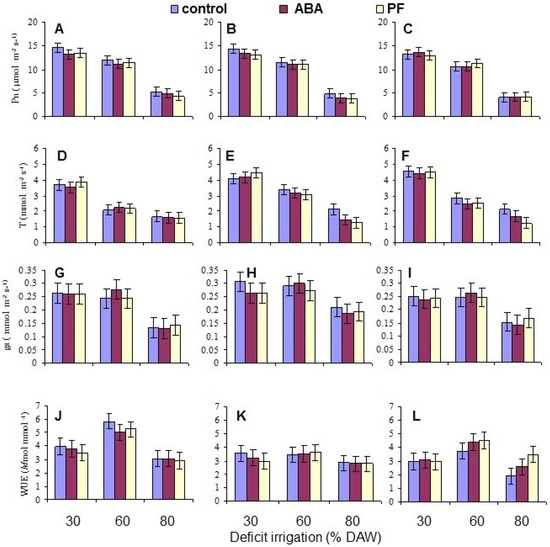