Non-Saccharomyces yeasts are becoming important because most of them are considered as spoilage species in winemaking processes, among them the species Saccharomycodes ludwigii. This species is frequently isolated at the end of the fermentation process and/or during storage of the wine, i.e., it can to grow in the presence of high levels of ethanol. Besides, this species is adaptable to unfavorable conditions such as high concentrations of SO2 and is characterized by its capacity to produce high amounts of undesirable metabolites as acetoin, ethyl acetate or acetic acid. To the present, physical (gamma irradiation and continuous pulsed electric fields), chemical (inhibitory compounds such as chitosan and dimethyl dicarbonate) and biological (antagonistic biocontrol by killer yeasts) treatments have been developed in order to control the growth of this spoilage yeast in wines and other fruit derivatives. Therefore, this review is focused on the most relevant studies conducted to control contamination by S. ludwigii. Moreover, potential applications of S. ludwigii in alternative winemaking techniques, for example for ageing-on-lees and stabilization of red wines, and improvement of aromatic profile are also examined. View Full-Text
Keywords: non-Saccharomyces yeast; Saccharomycodes ludwigii; S. ludwigii; spoilage yeasts’ control; ageing-on-lees non-Saccharomyces yeast; Saccharomycodes ludwigii; S. ludwigii; spoilage yeasts’ control; ageing-on-lees
►▼ Show Figures 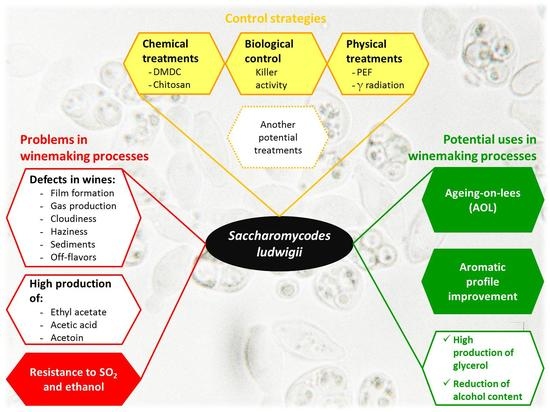