Carbon nanostructures including carbon black, carbon nanotubes, graphite or graphene have attracted a tremendous interest as fillers for elastomeric compounds. The preparation methods of nanocomposites that have a strong impact on the state of filler dispersion and thus on the properties of the resulting composites, are briefly described. At a same filler loading, considerable improvement in stiffness is imparted to the host polymeric matrix by the carbon nanomaterials with regard to that provided by the conventional carbon black particles. It is mainly attributed to the high aspect ratio of the nanostructures rather than to strong polymer-filler interactions. The orienting capability of the anisotropic fillers under strain as well the formation of a filler network, have to be taken into account to explain the high level of reinforcements. A comparison of the efficiency of the different carbon nanostructures is carried out through their mechanical and electrical properties but no clear picture can be obtained since the composite properties are strongly affected by the state of filler dispersion. View Full-Text
Keywords: carbon nanomaterials; elastomers; nanocomposites; reinforcement; mechanical properties; electrical properties carbon nanomaterials; elastomers; nanocomposites; reinforcement; mechanical properties; electrical properties
►▼ Show Figures 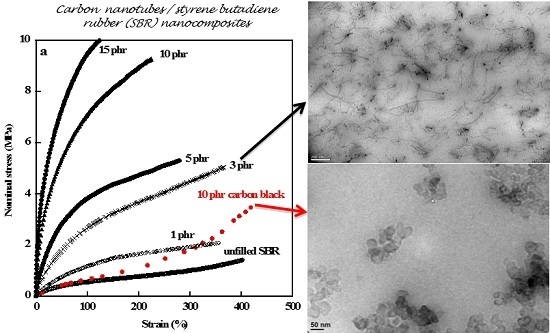 
Bokobza, Liliane. 2017. "Mechanical and Electrical Properties of Elastomer Nanocomposites Based on Different Carbon Nanomaterials." C 3, no. 2: 10.