Telomerase RNA contains a template for synthesizing telomeric DNA and has been proposed to act as a flexible scaffold for holoenzyme protein subunits in the RNP. In Saccharomyces cerevisiae, the telomerase RNA, TLC1, is bound by the Sm7 protein complex, which is required for stabilization of the predominant, non-polyadenylated (poly(A)–) TLC1 isoform. However, it remains unclear (1) whether Sm7 retains this function when its binding site is repositioned within TLC1, as has been shown for other TLC1-binding telomerase subunits, and (2) how Sm7 stabilizes poly(A)– TLC1. Here, we first show that Sm7 can stabilize poly(A)– TLC1 even when its binding site is repositioned via circular permutation to several different positions within TLC1, further supporting the conclusion that the telomerase holoenzyme is organizationally flexible. Next, we show that when an Sm site is inserted 5′ of its native position and the native site is mutated, Sm7 stabilizes shorter forms of poly(A)– TLC1 in a manner corresponding to how far upstream the new site was inserted, providing strong evidence that Sm7 binding to TLC1 controls where the mature poly(A)– 3′ is formed by directing a 3′-to-5′ processing mechanism. In summary, our results show that Sm7 and the 3′ end of yeast telomerase RNA comprise an organizationally flexible module within the telomerase RNP and provide insights into the mechanistic role of Sm7 in telomerase RNA biogenesis. View Full-Text
Keywords: telomerase; Sm7; 3′-end formation; RNA processing; TLC1; lncRNA; senescence telomerase; Sm7; 3′-end formation; RNA processing; TLC1; lncRNA; senescence
►▼ Show Figures 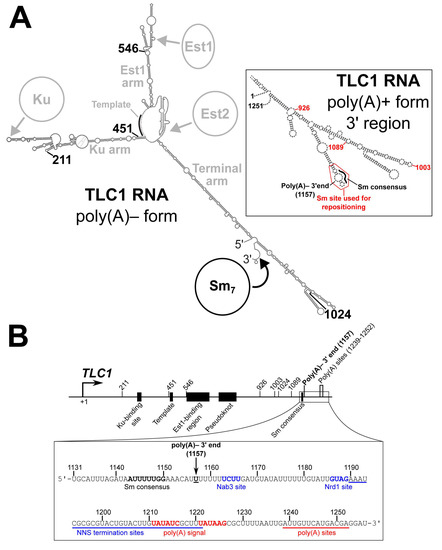