Emergence of Wrinkles during the Curing of Coatings

Sephadex® beads observed by SEM after freeze-drying are shown in Figure 5. In the G10 bead, a crack was clearly observed. The surface of the bead appeared to be smooth and rigid. With the G25 bead, hollows indicating the trace of the ice grains were observed in the internal region of the beads as well as on the margin. These characteristics of the SEM images correspond to those obtained by X-ray CT. However, clear difference in the network structure of the bead matrix was not confirmed among the Sephadex® beads used.

The frozen state of Sephadex® gels containing 50 wt % water was analyzed by using a synchrotron radiation-sourced X-ray CT and XRD.
By X-ray CT, the ice grains in Sephadex® beads were observed with a spatial resolution of ~1 μm. As a result, ice grains larger than ~1 μm were hardly observed in the beads after slow cooling, independent of the crosslink density. In G25 beads, a small number of ice grains of 3‒5 μm in diameter were observed after slow cooling, but most of the ice grains formed in the beads were smaller than ~1 μm. Ice grains larger than 10 μm in diameter were successfully observed in the refrozen G25 beads re-cooled from the temperature of the completion of ice crystallization during rewarming. These results obtained by the X-ray CT measurement were consistent with those previously obtained by two-dimensional XRD measurement.
The results obtained by XRD—especially by WAXD—corresponded well with those obtained by X-ray CT. The observation of a remarkable tailing in Bragg peaks due to the diffraction by hexagonal ice indicated the formation of small incomplete ice crystals or the presence of glassy water in a G25 gel. With the refrozen G25 gel re-cooled from the temperature of the completion of ice crystallization during rewarming, the tailing in Bragg peaks disappeared, which indicated the formation of large and stable ice crystals, as were observed by X-ray CT.
Finally, the size and distribution of the ice grains formed in Sephadex® beads were found to depend on the crosslink density.

Sephadex® G10, G25, and G50 were used in this experiment. G100 beads became too sticky, losing their bead structure when they were added with water, making it difficult to prepare G100 bead samples in quartz capillaries. So, G50 beads were used for the X-ray CT measurement instead of G100 beads as the bead sample with low crosslink densities (see the Discussion section). After having been dried at 60 °C for 20 h, each Sephadex® bead sample containing 50 wt % water was prepared by the addition of distilled water to the dried beads. For the preparation of samples used in the X-ray CT measurement, the beads were densely packed by 2‒3 mm length in a quartz capillary with an outside diameter of 0.7 mm and about 10 mm length. Both ends of the capillary containing bead samples were then sealed with silicon grease to prevent the evaporation of water. Samples prepared were cooled from 20 to −40 °C at the rate of 1 °C min−1 by using a programmable freezer and kept below −40 °C until the measurement. In the case of G25, the refrozen samples re-cooled from the temperature of the completion of ice crystallization during rewarming (−11 to −5 °C) to −40 °C were also prepared. Cooling and re-cooling rates were 1 °C min−1, and the heating rate during rewarming was 5 °C min−1. Rapid freezing where samples were put into a deep freezer controlled at −85 °C prior to the measurement was also conducted. The cooling rate at that time was ca. 60 °C min−1.
The X-ray CT measurement was carried out using the beam line of BL46XU at SPring-8 (Sayo, Hyogo, Japan). The X-ray wavelength was 0.1 nm, corresponding to 12.4 keV in energy. The angle of X-ray mirrors necessary to eliminate contamination of the X-ray by higher-order harmonics was set at 3.56 mrad. The size of the X-ray beam was 1 mm × 1 mm. The temperature of the frozen samples in the sample holder on the turntable (sample stage) was kept at about −40 °C by regulating the ejection speed of LN2 vapor introduced into the sample holder, and was measured with a thermocouple made of chromel-alumel. Frozen samples set on the turntable were continuously rotated 180 degrees at a rate of 1.2 degrees per second. The transmission images were acquired by using an X-ray imaging system composed of an AA50 X-ray imaging unit and a C4880-41S CCD camera (Hamamatsu Photonics K.K., Hamamatsu City, Shizuoka, Japan) set at the distance of 25 mm from the sample. A photograph of the apparatus for the X-ray CT measurement is shown in Figure 8. A set of 259 transmission images were acquired during the rotation. The exposure time for image acquisition was 250 msec. Two-dimensional images (tomograms) were reconstructed by the filtered back projection method. For each measurement, 1200 pieces of tomograms to be stacked were obtained. The size of pixels in the image data was 0.35 µm × 0.35 µm.

Samples for the observation by SEM were prepared in the same way as for the X-ray CT measurement. Sample beads of G10, G25, and G50 containing 50 wt % water were cooled to −40 °C at the rate of 1 °C min−1 by using a programmable freezer. After being freeze-dried, the beads were fixed on the aluminum stage with carbon tape and were sputter-coated with gold. Freeze-dried beads broken with a hammer were also prepared to observe the inside of the beads. SEM images were taken with a JSM-6010 PLUS_LA (JEOL Ltd., Akishima, Tokyo, Japan). 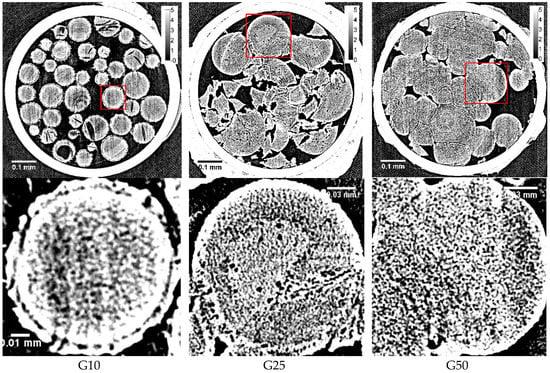 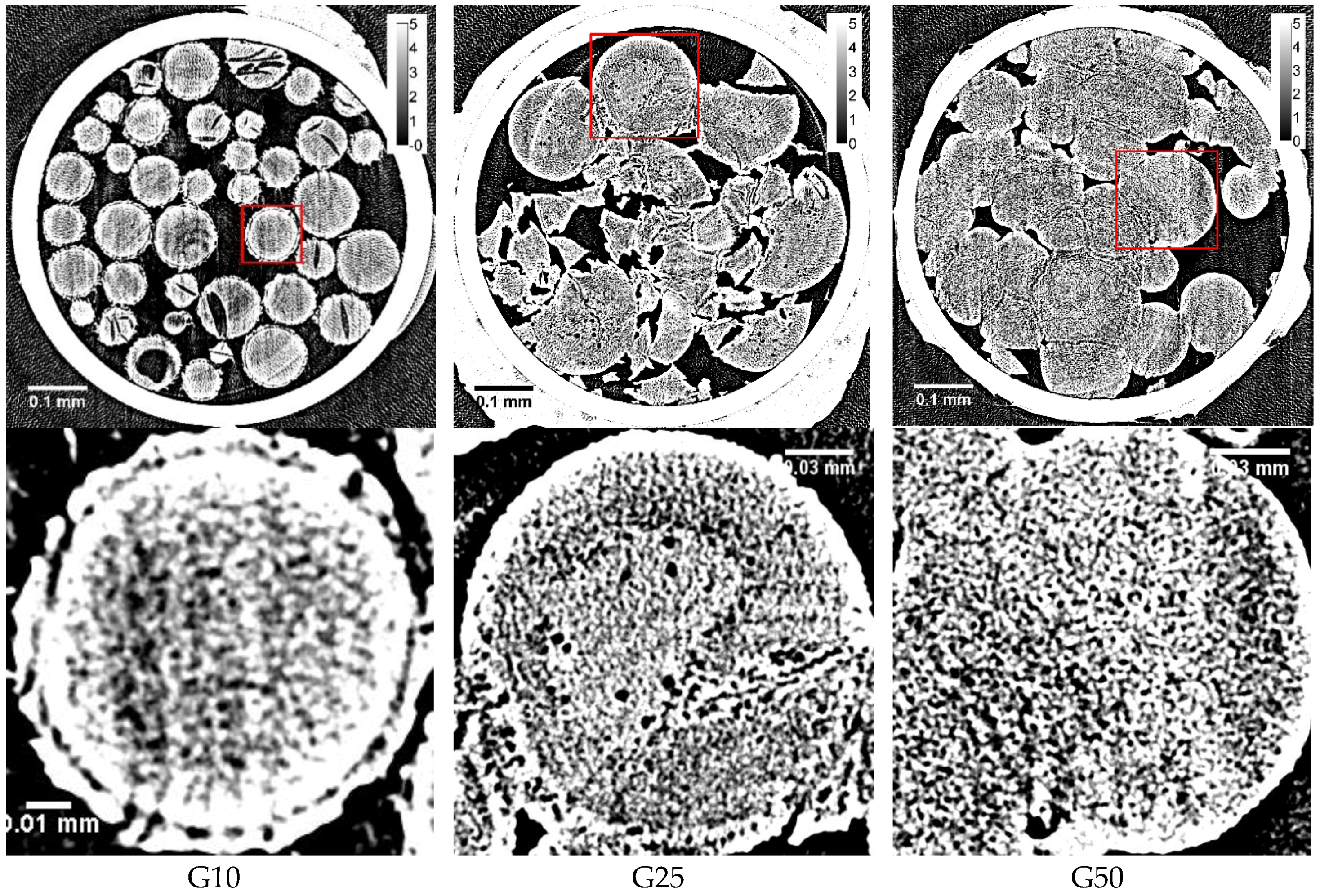 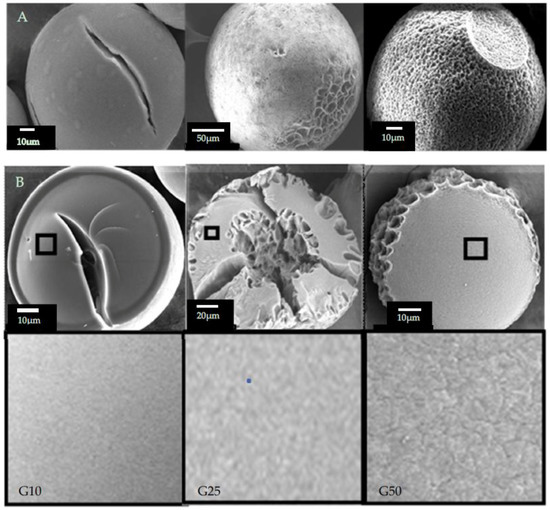 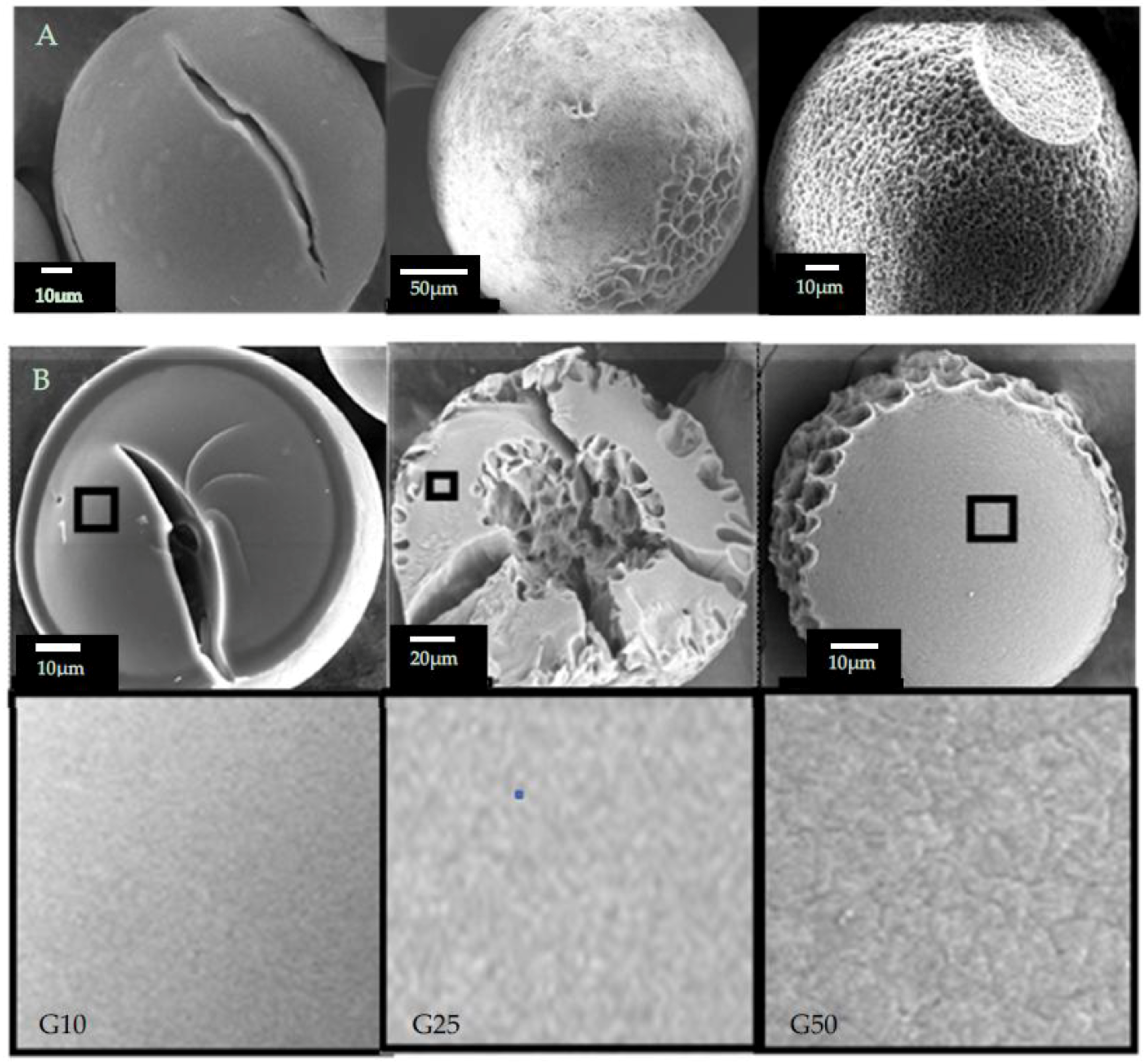 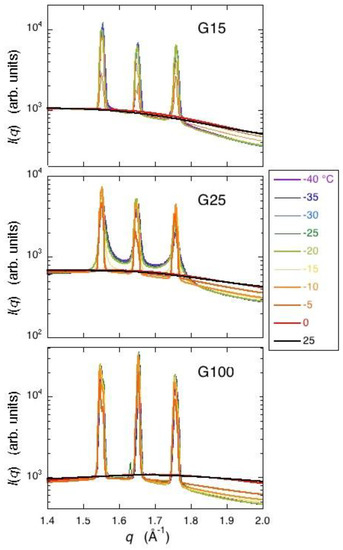 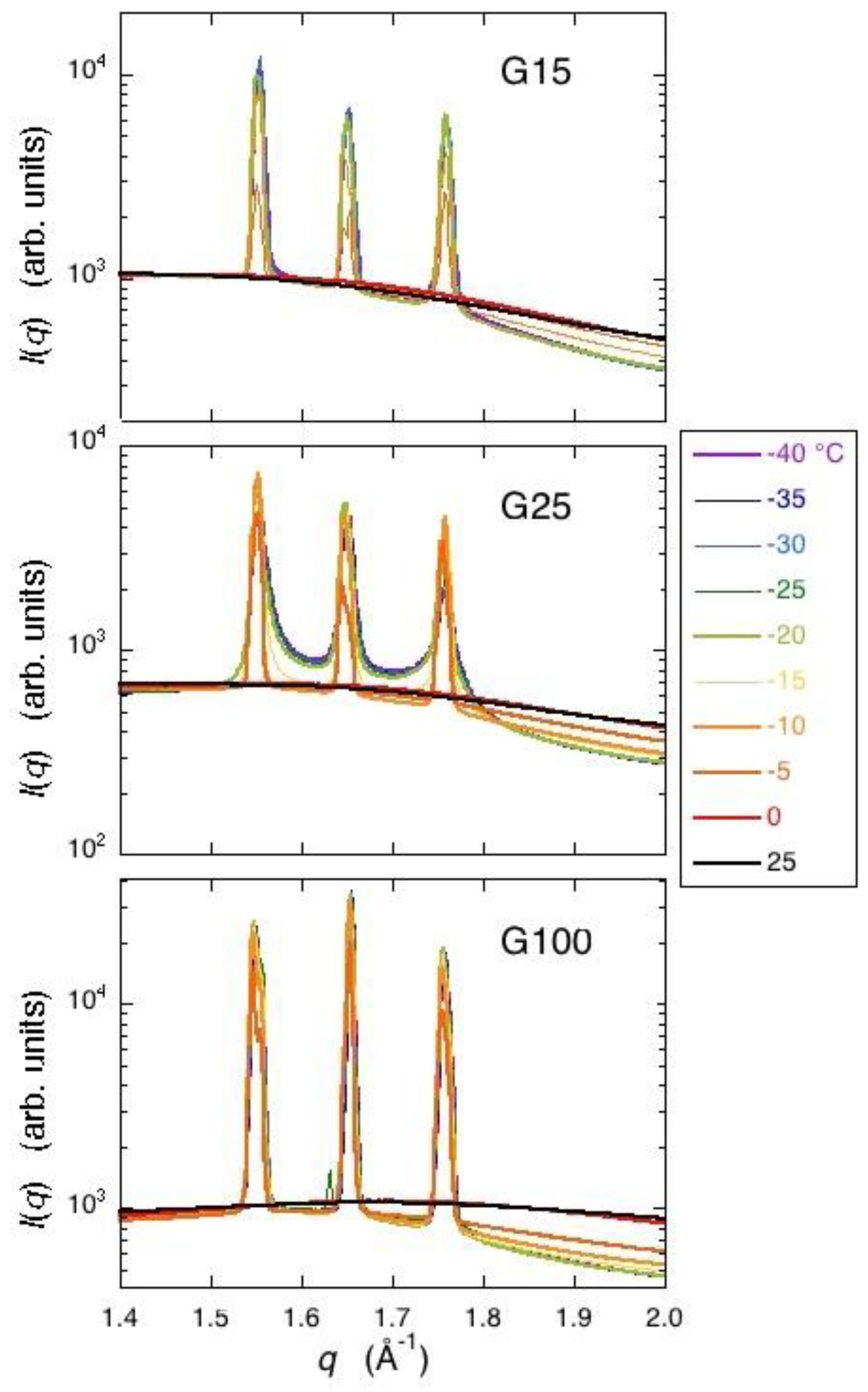 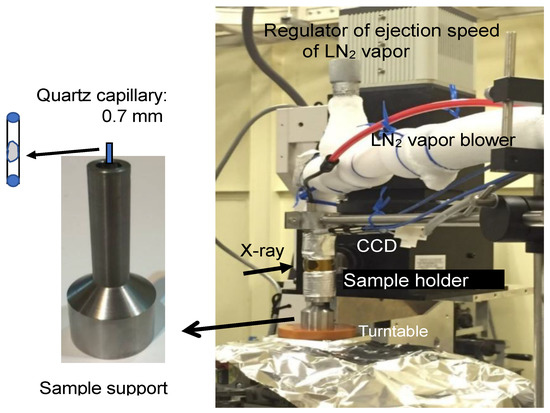 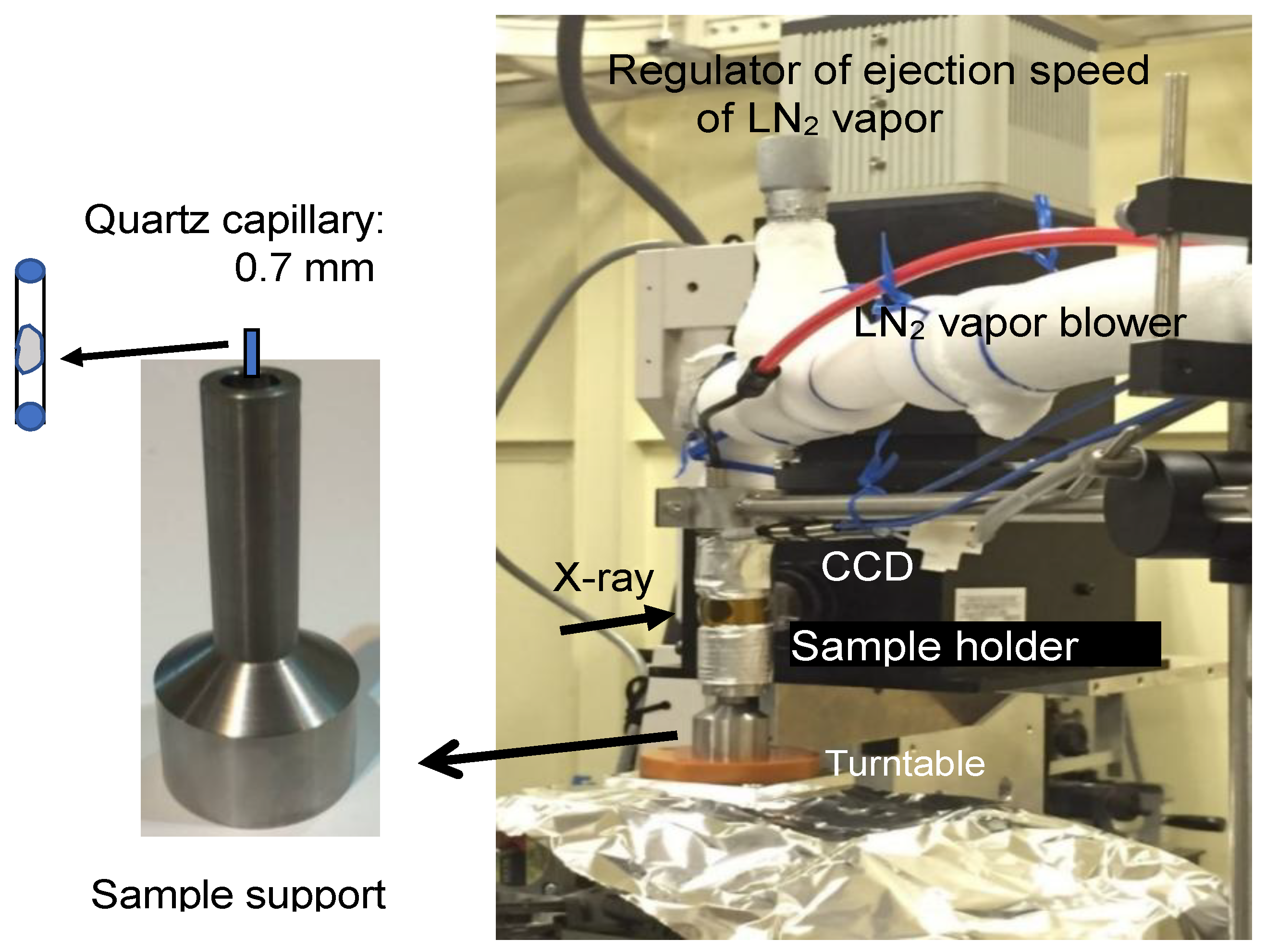