Controlling Variables in Molecular Gel Science: How Can We Improve the State of the Art?
Next Article in Special Issue

As the solvent in a polymer solution becomes poor, a phase separation will take place resulting in a phase equilibrium between two solutions of high and low polymer concentrations. What will happen, however, when the polymer chains are connected to form a network? This interesting question was first noticed and considered by Dušek and the possibility of phase transitions of networks has been discussed [1]. The volume phase transition (a discontinuous volume change) of gels, predicted by Dušek, was first experimentally observed by Tanaka on polyacrylamide gels in water-acetone mixtures [2]. The observed transition-like volume change was later ascribed to the effects of electric charges originating from acrylic acid groups as a result of hydrolysis of acrylamide groups. Later, Ilavsky et al. demonstrated [3,4], using copolymers (NDEA-co-MA) of N,N-diethylacrylamide (NDEA) and methacrylic acid (MA), that volume changes of non-ionic NDEA gels are continuous, while ionic (NDEA-co-MA) copolymer gels exhibited discrete volume changes. In this way, the idea was once prevailing that discontinuous volume changes of gels are favored by electric charges incorporated in polymer chains. In 1984, Hirokawa et al. observed the volume phase transition in a non-ionic thermosensitive poly(N-isopropylacrylamide) (NIPA) gels [5]. Then, effects of electric charges on the volume change of gels were examined by Hirotsu et al. [6] using copolymer gels (NIPA-co-AA) of NIPA and acrylic acid (AA). Their results indicated that introduction of electric charges enhanced the transition-like behavior observed for non-ionic NIPA gels. On the other hand, a study on another NIPA-copolymer gel, copolymers of NIPA and methacrylamidopropyltrimethylammonium chloride (MAPTAC), has indicated that transition-like volume changes of non-ionic NIPA gels disappear for copolymers containing MAPTAC more than 2 mol % and the volume changes of the latter gels are continuous [7]. These inconsistent results obtained on two NIPA-co-ionic component gels, NIPA-co-AA gels and NIPA-co-MAPTAC gels, have been puzzling. One way to reconcile the inconsistent results is a notion that AA and MAPTAC are different chemical entities and, hence, polymer-solvent and polymer-polymer interactions may differ significantly for the two NIPA copolymer gels [7]. Later, copolymer gels of NIPA with two kinds of ionic groups, one carboxyl group and the other amino group, have exhibited continuous temperature-induced volume changes as a result of the ionization of either ionic group, indicating chemically different groups have little consequences in this example [8]. Meanwhile, it has been concluded that NIPA-co-AA gels exhibit continuous volume changes with ionization [9,10], which is a similar behavior as NIPA-co-MAPTAC gels [7], but contrary to the reported behavior on the same kind of gel [6]. Thus, the results on two NIPA copolymer gels clearly indicate that introduction of electric charges changes a discontinuous volume change of NIPA gels to a continuous one [7,8,9,10]. The conclusion is further confirmed on another copolymer gel, NIPA-co-styrene sulfonate (SS) gel [9].
Summing up the experimental results described above, it is highly likely that an important mechanism is present regarding the effects of electric charges on the temperature-induced volume changes of gels, other than arising from different chemical properties of ionic groups. In this Communication we wish to propose a simple model to account for the charge effect under a highly approximate level of analysis.
It is pertinent to state here that continuous volume changes have been observed even for non-ionic NIPA gels, which suggests the volume phase transition of NIPA gels locates rather near the critical point. Additionally, we discuss only the case of thermosensitive non-ionic gels and the volume phase transition of ionic gels, in general, is completely outside the scope of this Communication.

2. The Swelling Equations of Gels

The chemical potential of solvent water μw is measured from the reference state of pure water μw0, Δμw = μw − μw0. Then, Δμw can be written as Equation (1) in terms of temperature T, and the gas constant R, and the number of moles of the solvent water n1:
Δμw/RT = ln(1 − φ) + φ + χφ2 + [∂Gelas/∂n1 + Δμwion]/RT,
Here, m Gelas represents the elastic free energy and Δμwion represents the contribution arising from the introduction of ionic groups together with associated counterions. The volume fraction of polymer and the interaction parameter of polymer with solvent are denoted as φ and χ, respectively. We write the gel volume as V, that in the dry state as Vd, and hence φ = Vd/V. The gel volume V0 corresponds to the state in which polymer chains are in the unperturbed state.

From Equations (1) and (4), we have the following expressions for Δμw/RT:
Δμw/RT = ln(1 − φ) + φ + χφ2 +ν(V1/V0)·[(φ/φ0)1/3 − (1/2)·(φ/φ0)],
= ln(1 − φ) + φ + χφ2 + ν*·RT[(V1/φd)]·[φd2/3 <α2>0 φ1/3 − (1/2)·φ],
Here, the isotropic deformation factor <α2>0 is defined as <α2>0 = (Vd/V0)2/3 = (φ0/φd)2/3. There is a positive maximum of Δμw/RT in the region of very small φ, due to the situation that polymer chains connected through crosslinks cannot be diluted indefinitely. The equilibrium swelling volume V is determined by the condition of Δμw = 0. When there are two maxima and one minimum of Δμw/RT satisfying the conditions (Δμw/RT)min < 0 and (Δμw/RT)max > 0, the gel volume change induced by a change in χ can be discontinuous (transition-like behavior). The critical end point for the volume phase transition is given as follows:
∂(Δμw/RT)/∂φ = 0 and ∂2(Δμw/RT)/(∂φ)2 = 0,
Dušek and Patterson have examined the critical condition in terms of Equation (5’) under the assumption that φd =1 and χ is a constant independent of φ [1]. They concluded that there is no unique set of parameter values [φ, χ, ν*, <α2>0] corresponding to the critical point.
On the other hand, increase of χ values with increasing polymer concentration has been frequently observed for solutions of linear polymers in poor solvents [11]. Erman and Flory have shown that discontinuous volume change of gels is possible if relevant φ-dependent χ parameters are taken into account [11]. Below, we assume χ parameters that linearly depend on φ:
χ = χ1 + χ2 φ,

3. Effects of Electric Charge on the Swelling Behavior of Gels

At least, the following three effects are noted:
In the present highly approximate analyses, two possible contributions 2 and 3 above are ignored and only the counterion contribution is considered. Two frequently-observed phenomena with the introduction of electric charges are: (a) the concentrated phase (collapsed phase) becomes more unstable, which corresponds to an increase in the transition temperature in the case of NIPA gels; and (b) the increased swollen gel volume results in an enlarged volume change at the transition.

Disappearance of the transition-like gel volume change as a result of the introduction of electric charges could be generally understood in terms of the mechanism presented here. In the mechanism it is assumed that the mixing entropy of counterions plays a central role compared with other effects induced by ionic groups such as on the elastic properties and the χ parameter. 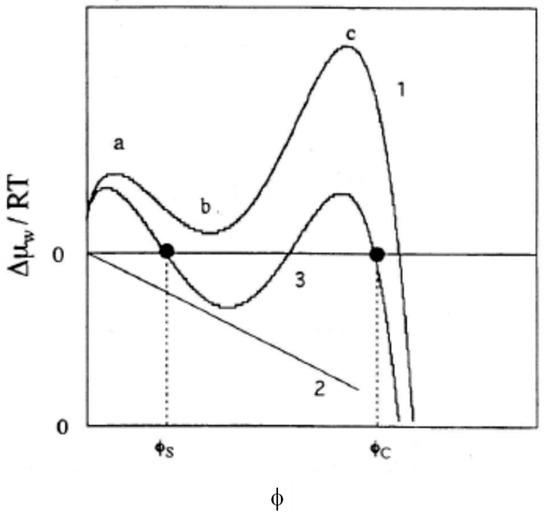 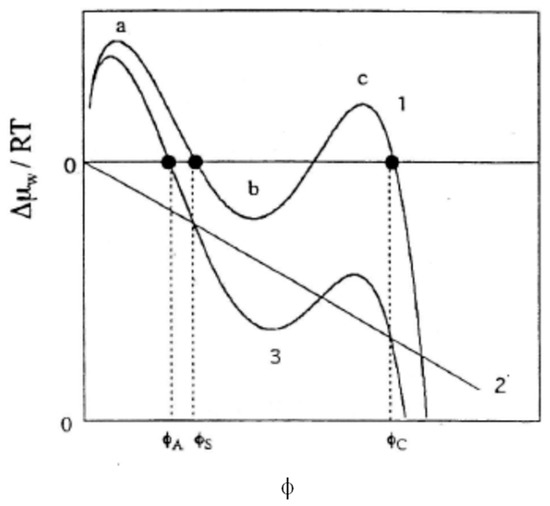 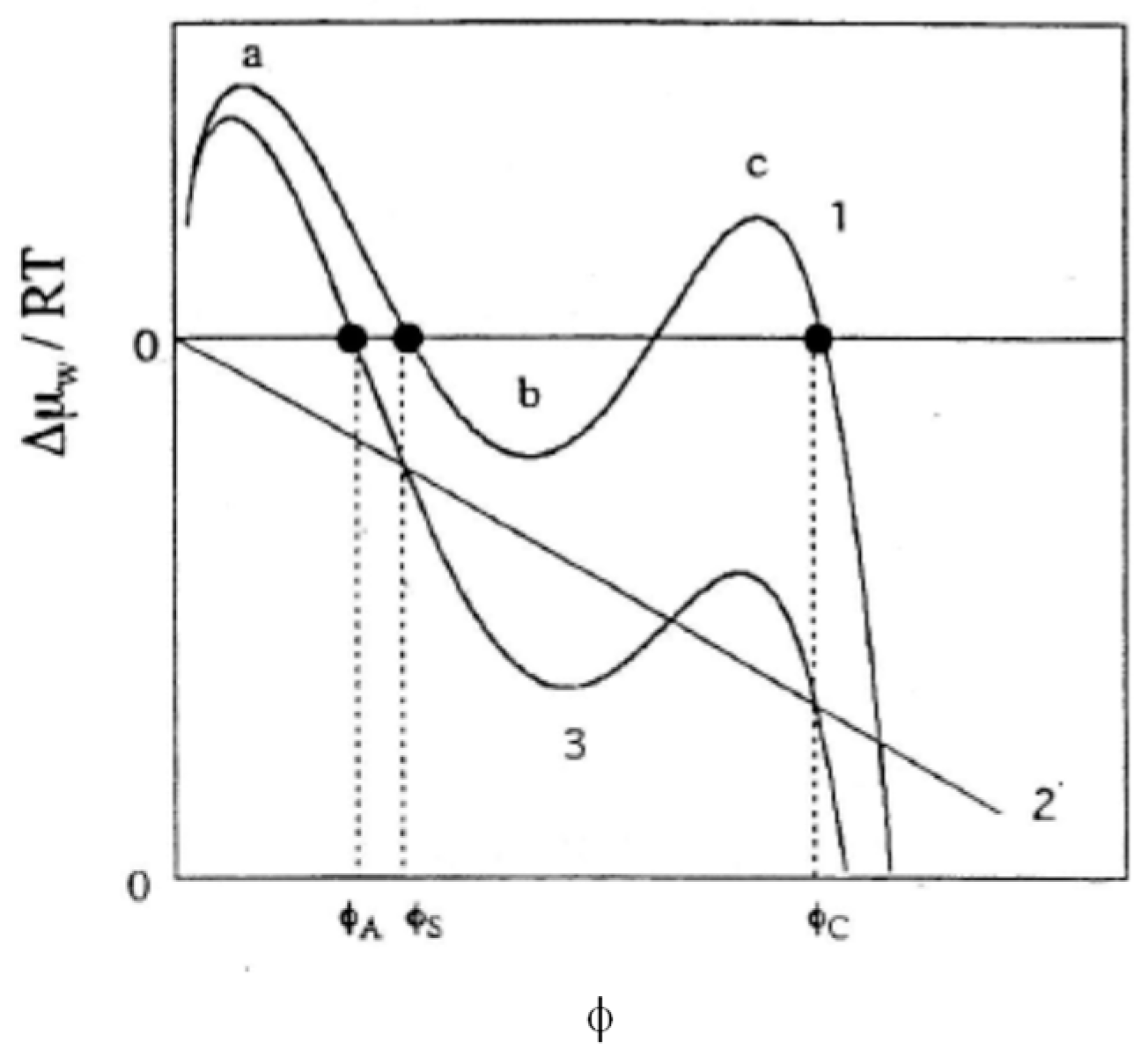