The development of yeast biofilms is a major problem due to their increased antifungal resistance, which leads to persistent infections with severe clinical implications. The high antifungal activity of well-characterized chitosan polymers makes them potential alternatives for treating yeast biofilms. The activity of a chito-oligosaccharide with a depolymerization degree (DPn) of 32 (C32) and a fraction of acetylation (FA) of 0.15 on Candida sp. biofilms was studied. The results showed a concentration-dependent reduction in the number of viable cells present in C. albicans, C. glabrata, and C. guillermondii preformed biofilms in the presence of C32, especially on intermediate and mature biofilms. A significant decrease in the metabolic activity of yeast biofilms treated with C32 was also observed. The antifungals fluconazole (Flu) and miconazole (Mcz) decreased the number of viable cells in preformed early biofilms, but not in the intermediate or mature biofilms. Contrary to Flu or Mcz, C32 also reduced the formation of new biofilms. Interestingly, a synergistic effect on yeast biofilm was observed when C32 and Flu/Mcz were used in combination. C32 has the potential to become an alternative therapeutic agent against Candida biofilms alone or in combination with antifungal drugs and this will reduce the use of antifungals and decrease antifungal resistance. View Full-Text
Keywords: chito-oligosaccharides; chitosan; antifungal; yeast; Candida; biofilm chito-oligosaccharides; chitosan; antifungal; yeast; Candida; biofilm
►▼ Show Figures 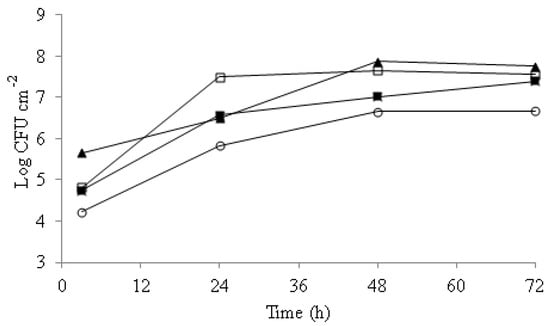