Application of Disinfectants for Environmental Control of a Lethal Amphibian Pathogen

Chytridiomycosis is an emerging infectious disease threatening amphibian populations worldwide. While environmental disinfection is important in mitigating the disease, successful elimination of Batrachochytrium dendrobatidis (Bd) without excessively harming ecosystems is challenging. We selected peracetic acid (PAA) as the most potent of six commercially available products regarding their ability to inhibit growth of a highly virulent Bd strain. PAA killed Bd after 5 min of exposure to approximately 94.7 mg/L. We examined the toxicity of PAA against three invertebrate species and Discoglossus pictus tadpoles. 93% of invertebrates, but none of the tadpoles survived 5 min of exposure to 94.7 mg/L. Tadpoles showed no adverse effects after 5 min exposure to concentrations of approximately 37.9 mg/L or lower. Addition of PAA to aquatic microcosms decreased pH, while dissolved oxygen (DO) initially increased. Degradation of PAA reversed the pH drop, but caused a massive drop in DO, which could be remedied by aeration. As proof of concept, microcosms that were aerated and treated with 94.7 mg/L PAA sustained survival of tadpoles starting 48 h after treatment. Disinfecting aquatic environments using PAA could contribute to mitigating chytridiomycosis, while preserving at least some invertebrate diversity, but requires temporary removal of resident amphibians. View Full-Text
Keywords: Batrachochytrium dendrobatidis; disinfection; amphibian; peracetic acid; mitigation Batrachochytrium dendrobatidis; disinfection; amphibian; peracetic acid; mitigation
►▼ Show Figures 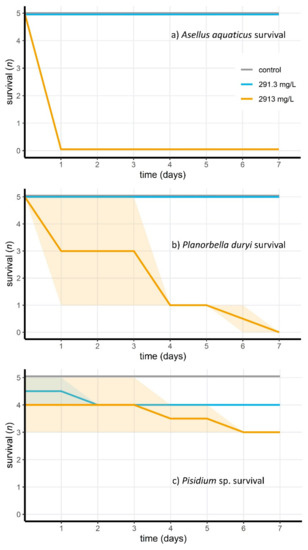