Background: Due to the difficulties in the definite diagnosis, data on brain imaging in pediatric patients with central nervous system (CNS)-invasive mold infection (IMD) are scarce. Our aim was to describe brain imaging abnormalities seen in immunocompromised children with CNS-IMD, and to analyze retrospectively whether specific imaging findings and sequences have a prognostic value. Methods: In a retrospective study of 19 pediatric patients with proven or probable CNS-IMD, magnetic resonance imaging (MRI)-findings were described and analyzed. The results were correlated with outcome, namely death, severe sequelae, or no neurological sequelae. Results: 11 children and 8 adolescents (11/8 with proven/probable CNS-IMD) were included. Seven of the patients died and 12/19 children survived (63%): seven without major neurological sequelae and five with major neurological sequelae. Multifocal ring enhancement and diffusion restriction were the most common brain MRI changes. Diffusion restriction was mostly seen at the core of the lesion. No patient with disease limited to one lobe died. Perivascular microbleeding seen on susceptibility weighted imaging (SWI) and/or gradient-echo/T2* images, as well as infarction, were associated with poor prognosis. Conclusions: The presence of infarction was related to poor outcome. As early microbleeding seems to be associated with poor prognosis, we suggest including SWI in routine diagnostic evaluation of immunocompromised children with suspected CNS-IMD. View Full-Text
Keywords: child; invasive mold infection; central nervous system; magnetic resonance imaging of the brain; outcome child; invasive mold infection; central nervous system; magnetic resonance imaging of the brain; outcome
►▼ Show Figures 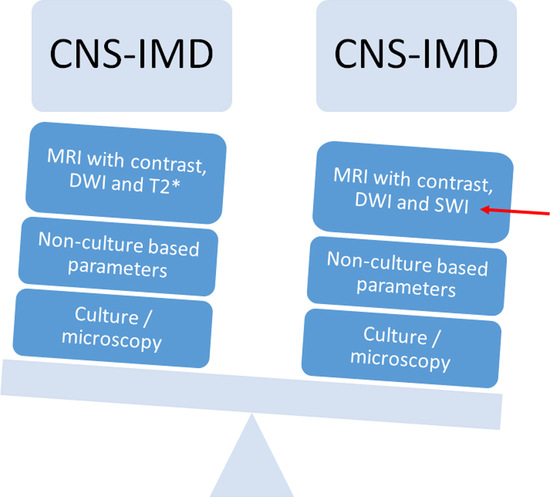