The First Two Cases of Candida auris in The Netherlands

Background. Candida auris has spread rapidly around the world as a causative agent of invasive candidiasis in health care facilities and there is an urgent need to find new options for treating this emerging, often multidrug-resistant pathogen. Methods. We screened the Pathogen Box® chemical library for inhibitors of C. auris strain 0390, both under planktonic and biofilm growing conditions. Results. The primary screen identified 12 compounds that inhibited at least 60% of biofilm formation or planktonic growth. After confirmatory dose-response assays, iodoquinol and miltefosine were selected as the two main leading repositionable compounds. Iodoquinol displayed potent in vitro inhibitory activity against planktonic C. auris but showed negligible inhibitory activity against biofilms; whereas miltefosine was able to inhibit the growth of C. auris under both planktonic and biofilm-growing conditions. Subsequent experiments confirmed their activity against nine other strains C. auris clinical isolates, irrespective of their susceptibility profiles against conventional antifungals. We extended our studies further to seven different species of Candida, also with similar findings. Conclusion. Both drugs possess broad spectrum of activity against Candida spp., including multiple strains of the emergent C. auris, and may constitute promising repositionable options for the development of novel therapeutics for the treatment of candidiasis. View Full-Text
Keywords: Candida auris; antifungals; drug screening; Pathogen Box; repurposing Candida auris; antifungals; drug screening; Pathogen Box; repurposing
►▼ Show Figures 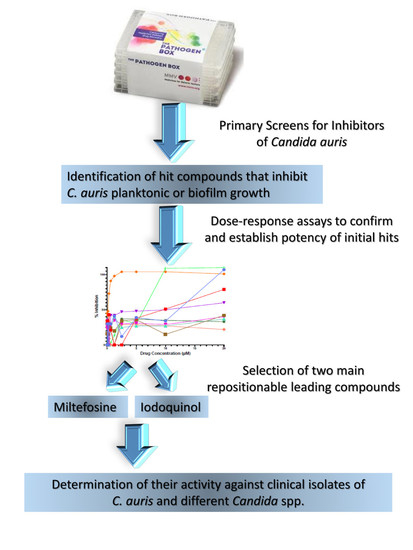