The resistance among various opportunistic Fusarium species to different antifungal agents has emerged as a cause of public health problems worldwide. Considering the significance of multi-drug resistant (MDR), this paper emphasizes the problems associated with MDR and the need to understand its clinical significance to combat microbial infections. The search platform PubMed/MEDLINE and a review of 32 cases revealed a common multidrug-resistant profile exists, and clinically relevant members of Fusarium are intrinsically resistant to most currently used antifungals. Dissemination occurs in patients with prolonged neutropenia, immune deficiency, and especially hematological malignancies. Amphotericin B displayed the lowest minimum inhibitory concentrarions (MICs) followed by voriconazole, and posaconazole. Itraconazole and fluconazole showed high MIC values, displaying in vitro resistance. Echinocandins showed the highest MIC values. Seven out of ten (70%) patients with neutropenia died, including those with fungemia that progressed to skin lesions. Clinical Fusarium isolates displayed a common MDR profile and high MIC values for the most available antifungal agents with species- and strain-specific differences in antifungal susceptibility. Species identification of Fusarium infections is important. While the use of natamycin resulted in a favorable outcome in keratitis, AmB and VRC are the most used agents for the treatment of fusariosis in clinical settings. View Full-Text
Keywords: Fusarium; fungemia; disseminated infections; local infections; underlying conditions; antifungal susceptibility; multi-drug resistance; Amphotericin B; voriconazole Fusarium; fungemia; disseminated infections; local infections; underlying conditions; antifungal susceptibility; multi-drug resistance; Amphotericin B; voriconazole
►▼ Show Figures 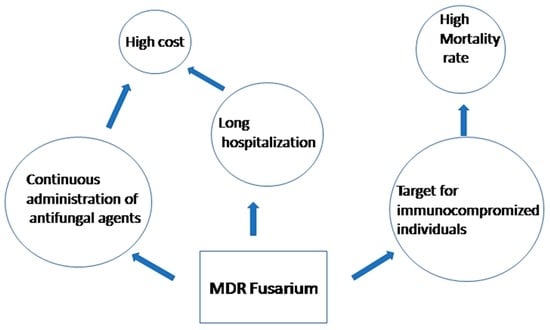