Acknowledgement to Reviewers of Journal of Fungi in 2016

Members of the entomophagous fungi are considered very crucial in the fungal domain relative to their natural phenomenon and economic perspectives; however, inadequate knowledge of their mechanisms of interaction keeps them lagging behind in parallel studies of fungi associated with agro-ecology, forest pathology and medical biology. Ophiocordyceps sinensis (syn. Cordyceps sinensis), an intricate fungus-caterpillar complex after it parasitizes the larva of the moth, is a highly prized medicinal fungus known widely for ages due to its peculiar biochemical assets. Recent technological innovations have significantly contributed a great deal to profiling the variable clinical importance of this fungus and other related fungi with similar medicinal potential. However, a detailed mechanism behind fungal pathogenicity and fungal-insect interactions seems rather ambiguous and is poorly justified, demanding special attention. The goal of the present review is to divulge an update on the published data and provides promising insights on different biological events that have remained underemphasized in previous reviews on fungal biology with relation to life-history trade-offs, host specialization and selection pressures. The infection of larvae by a fungus is not a unique event in Cordyceps; hence, other fungal species are also reviewed for effective comparison. Conceivably, the rationale and approaches behind the inheritance of pharmacological abilities acquired and stored within the insect framework at a time when they are completely hijacked and consumed by fungal parasites, and the molecular mechanisms involved therein, are clearly documented. View Full-Text
Keywords: Fungal elicitor; MAP kinase; metabolites; PR-proteins; receptors; signal transduction; transcriptional factors; transcriptome sequencing; virulence factors Fungal elicitor; MAP kinase; metabolites; PR-proteins; receptors; signal transduction; transcriptional factors; transcriptome sequencing; virulence factors
►▼ Show Figures 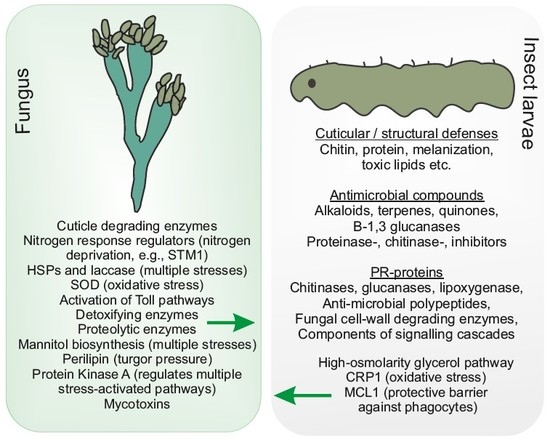