The Indubrasil breed was developed in the Brazilian region called Triângulo Mineiro as a result of a cross between zebu cattle. Initially, it was used as a terminal cross and currently it represents approximately 4.45% of all the Brazilian zebu cattle. Studies were conducted to estimate genetic parameters in the Indubrasil using pedigree information, however, until now, no study has been developed using large-scale genomic markers in this breed. Pedigree information are widely used to investigate population parameters; however, they can neglect some estimates when compared to the use of genomic markers. Therefore, the objective of this study was to investigate the population structure and the genetic diversity of Indubrasil cattle using a high-density Single Nucleotide Polymorphism (SNP) panel (Illumina BovineHD BeadChip 700k). Levels of genomic homozygosity were evaluated using three different approaches: Runs of homozygosity (FROH), % of homozygosis (FSNP), and inbreeding coefficient (Fx). Further, Runs of Homozygosity (ROH) segments conserved among the animals were investigated to identify possible regions associated with the breed characteristics. Our results indicate that even the Indubrasil breed having a small effective population size, the levels of homozygosity (FROH = 0.046) are still small. This was possibly caused by the cross conducted among different breeds for its development. It suggests no immediate risks associated with loss of genetic variation. This information might be used in breeding programs, for the breed conservation and for the expansion of the Indubrasil breed. View Full-Text
Keywords: Indubrasil; SNPs; inbreeding; pedigree; genetic diversity Indubrasil; SNPs; inbreeding; pedigree; genetic diversity
►▼ Show Figures 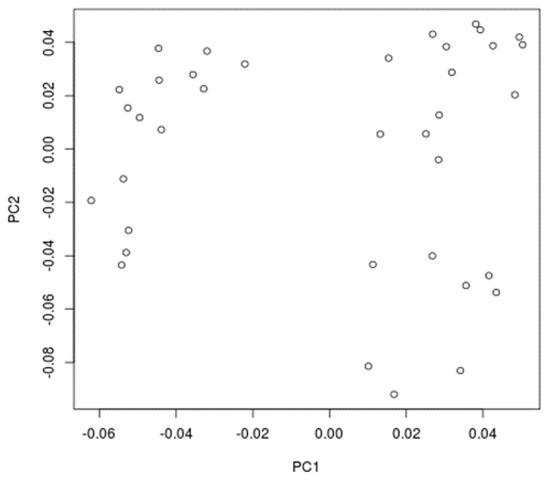