The Use of Percutaneous Ultrasound-Guided Radiofrequency Heat Ablation for Treatment of Primary Hyperparathyroidism in Eight Dogs: Outcome and Complications

Percutaneous ultrasound-guided radiofrequency heat-ablation (UG-RHA) is a therapeutic option for dogs with primary hyperparathyroidism (PHPTH) but information about its outcome is still controversial. This retrospective study aimed to evaluate the outcome and complications of UG-RHA in dogs with PHPTH. The medical records of dogs with PHPTH submitted to UG-RHA between June 2012 and September 2015 in a French referral center were retrospectively reviewed. Eight cases were included. No sex predisposition was found. The median age at diagnosis was 12 years. The most common clinical sign was polyuria/polydipsia. All of the dogs were hypercalcaemic prior to UG-RHA, and all showed a parathyroid nodule identified upon cervical ultrasound. UG-RHA was uneventful, allowing a successful resolution of hypercalcemia in all dogs (8/8). Six out of eight dogs did not receive vitamin D supplementation either pre- or post-procedure. From these, three dogs developed biochemical hypocalcemia, but only one required therapy. Other short-term complications included Horner’s syndrome (1/8) and aspiration bronchopneumonia, which led to cardio-respiratory arrest in one large-breed dog (1/8). Long-term complications were scarce, with no recurrence reported in all of the cases that were assessed in follow-up (4/7). This study demonstrates that UG-RHA has few short or long-term complications, and it is a good therapeutic alternative for dogs with PHPTH. View Full-Text
Keywords: heat-ablation; dogs; hyperparathyroidism; parathyroids; complications; ultrasound; radiofrequency heat-ablation; dogs; hyperparathyroidism; parathyroids; complications; ultrasound; radiofrequency
►▼ Show Figures 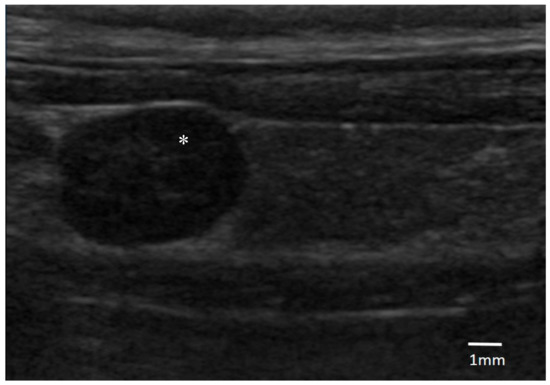