Diabetes mellitus is a common endocrinopathy of cats that is characterized by persistent fasting hyperglycemia. However, stress induces substantial hyperglycemia in cats that poses a challenge to the veterinarian who may wrongly interpret the high serum concentration of blood glucose as evidence of diabetes mellitus. Fructosamine is a glycated serum protein that serves as an index of glycemic control in cats and is useful because it is not affected by stress hyperglycemia. However, factors such as body weight, hypoproteinemia, and increased serum thyroid hormone concentration can alter fructosamine concentration. The goal of this retrospective study was to compare the fructosamine concentrations in diabetic and nondiabetic cats with and without uncontrolled hyperthyroidism. A secondary goal was to determine the effect of sex, age, different populations of cats, and diabetes on the variability of fructosamine. We found that the mean (±SE) serum fructosamine of hyperthyroid diabetic cats (332 ± 24 µmol/L, 95% CI 291–379 µmol/L) was within the population-based reference interval (200–360 µmol/L) and significantly lower in comparison to euthyroid diabetic cats (527 ± 10 µmol/L, 95% CI 515–553 µmol/L). Additionally, in this study, diabetes accounted only for approximately 50% of the variance in serum fructosamine, while age, sex, and population made a minor contribution to this variance. In conclusion, finding serum fructosamine that is within the population-based reference interval in an uncontrolled diabetic cat should alert the veterinarian to the possibility of concurrent hyperthyroidism. Additionally, the veterinary clinician should consider that serum fructosamine might be substantially affected by factors other than diabetes. View Full-Text
Keywords: diabetes mellitus; felis catus; fructosamine; hyperthyroidism diabetes mellitus; felis catus; fructosamine; hyperthyroidism
►▼ Show Figures 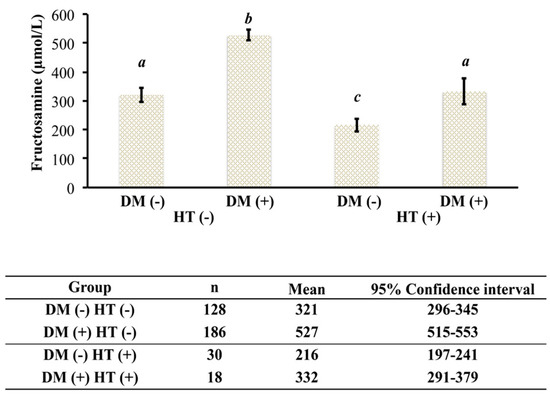