The emergence of antibiotic-resistant bacteria in food animals is a potential public health concern. Staphylococci are a significant opportunistic pathogen both in humans and dairy cattle. In the present study, the genotypic characterization of methicillin-resistant staphylococcal strains recovered from dairy cattle in a rural community (Okada, Edo State, Nigeria) was investigated. A total of 283 samples from cattle (137 milk samples and 146 nasal swabs) were assessed between February and April 2015. Antimicrobial susceptibility was performed by Kirby-Bauer disc diffusion method. Polymerase chain reaction (PCR) assay was employed for the detection of 16S rRNA, mecA and Panton-Valentine Leucocidinis (PVL) genes. The staphylococcal strains were identified through partial 16S ribosomal ribonucleic acids (rRNA) nucleotide sequencing, and Basic Local Alignment Search Tool (BLAST) analysis of the gene sequence showed that the staphylococcal strains have 96%–100% similarity to Staphylococcus aureus (30), S. epidermidis (17), S. haemolyticus (15), S. saprophyticus (13), S. chromogenes (8), S. simulans (7), S. pseudintermedius (6) and S. xylosus (4). Resistance of 100% was observed in all Staphylococcus spp. against MET, PEN, CLN, CHL and SXT. Multi-drug resistant (MDR) bacteria from nasal cavities and raw milk reveals 13 isolates were MDR against METR, PENR, AMXR, CLNR, CHLR, SXTR CLXR, KANR, ERYR, and VANR. Of all isolates, 100% harboured the mecA gene, while 30% of the isolates possess the PVL gene. All S. aureus harboured the PVL gene while other Staphylococcus spp. were negative for the PVL gene. The presence of methicillin-resistant Staphylococcus spp. isolates in dairy cattle is a potential public health risk and thus findings in this study can be used as a baseline for further surveillance.
Keywords: multi-drug resistant; staphylococcal; resistance gene; virulence gene; infectious disease multi-drug resistant; staphylococcal; resistance gene; virulence gene; infectious disease

Staphylococci are frequently found amongregular bacterial flora of the flexible continuous coverings of human andother animal bodies, and mucosal surfaces of the respiratory, upper alimentary, and urogenital tracts of mammals and birds. In milk-producing animals, Staphylococcus species still remains one of the most indicative organisms connected with clinical and sub-clinical bovine mastitis worldwide [1]. Staphylococcus spp. have been the principal theme of studies on antibiotic resistance because of their significance for all forms of milk-producing animals [2]. Nevertheless, in recent years, the rate of reported coagulase negative staphylococci (CNS) mastitis has become substantially more numerous [2]. In human medicine, antimicrobial multi-resistance is rapidly encountered and methicillin-resistant S. aureus (MRSA) and methicillin-resistant coagulase-negative Staphylococcus (MR-CNS) strains are among the most threatening bacteria involved in nosocomial infections. In veterinary science, staphylococcal strains play a role in a wide range of diseases in various animal species, such as bovine mastitis (e.g., S. aureus and coagulase-negative staphylococcal strains such as S. epidermidis, S. haemolyticus, S. chromogenes), canine pyoderma (S. pseudintermedius), exudative epidermitis in pigs (S. hyicus), or septicaemia in poultry (S. aureus) [3].
Strains of MRSA are resistant to β-lactam antibiotics, including all penincillinase-stable β-lactam antibiotics. Resistance is most commonly depicted by mecA gene, which is localized on a genomic island known as the staphylococcal cassette chromosome (SCCmec) [4]. This gene encodes for penicillin-binding protein (PBP2a) which localizes in the bacterial cell wall and has a low affinity for β-lactam antibiotics. Therefore, this group of antibiotics is not effective against bacteria expressing mecA gene. Due to the disseminated use of antibiotics, the resistance profile of microorganisms is increasing within bacterial population. Community-acquired MRSA is now increasingly identified with no prior hospital exposure. These community-based infections have been reported in patients from both rural and urban settings [1].
Staphylococci entails diversity of disease in humans and animals, its ability to cause diseases is predominantly connected to a combination of toxin-mediated virulence, invasive capacity, and antibiotic resistance [5]. In 2009, the European Food Safety Authority (EFSA) underlined the increasing worry for public health represented by the presence of methicillin-resistant S. aureus (MRSA) in food-producing animals and suggested that further work should be carried out on sampling detection and quantification of MRSA carriage in both humans and animals, as well as on the infection of food and the environment [6]. In the present study we investigated the occurrence and characterization of methicillin-resistant staphylococcal isolates from free-range dairy cattle in a rural community Okada, Edo State, Nigeria.

A cross-sectional study design was used to determine the bacteriological analysis of raw milk and nasal cavities in a rural community Okada, Edo State of Nigeria.

A total of 283 samples were examined and assessedfrom free-range dairy cattle (137 milk samples and 146 nasal swabs) between February and April 2015 in a rural community in Okada, Edo State, Nigeria. This research was carried out in a predominantly Edo South region (Okada, Ovia North-East Local Government Area, Edo State, Nigeria) population where electricity and formal schooling are rare in the pastoral and rural communities. People in the region live in close proximity to livestock and the livestock herds in the area frequently come in contact with one another. In the communities being studied, livestock antibiotics are mostly administered by animal owners rather than veterinarians.
Sampling was performed using standard procedures by the European Food Safety Authority [6]. Prior to sample collection, the udder, teats, and adjacent flank areas were thoroughly washed and dried with single-service sanitary paper towel and the teats were disinfected with 70% alcohol. Fifteen millilitres (15 mL) of milk from each quarter was collected. The milk samples were transported in an ice box to the laboratory within 3 h. Ethics approval was not required for this study as taking a nasal swab does not cause pain, distress or lasting harm. MRSA was isolated using 100 mL Mueller Hinton (MH) broth supplemented with NaCl (6.5%) and incubated at 37 °C for 20–24 h. One millilitre (1 mL) of Mueller Hinton (MH) broth was added to Tryptic Soy Broth (TSB) and incubated overnight at 37 °C [7]. Ten micro-litres (10 μL) of Tryptic Soy Broth (TSB) were spread on MRSA selective agar plate (CHROMagarTM MRSA-ITK Diagnostics BV, Netherlands) and incubated for 48 h at 37 °C. At both 24 and 48 h, plates were inspected and suspected colonies were purified on Columbia agar plates with 5% sheep blood (CSB) and incubated overnight at 37 °C. All isolates were confirmed to be Staphylococcal aureus, characteristically: by their typical colonial appearance (displaying golden-yellow colonies), having a positive catalase test, and staining as Gram-positive cocci in clusters. Other staphylococci species were culturally and morphologically identified as coagulase-negative staphylococci (CNS) forming non-golden yellow and non-beta-hemolytic colonies.

Isolation of genomic DNA extraction was carried out as described by Shuiepet et al. [9]. Single colonies grown on Brain Heart Infusion agar were transferred to 1.5 mL of Brain Heart Infusion broth and cultures were grown on a shaker for 48 h at 28 °C. After this period, cultures were centrifuged at 4600 rpm for 5 min. The resulting pellets were re-suspended in 520 µL of TE buffer, then 15 µL of 20% SDS and 3 µL of Proteinase K (20 mg·mL–1) were added. The mixture was incubated for 1 h at 37 °C, then 100 µL of 5 M NaCl and 80 µL of a 10% cetyltrimethyl ammonium bromide (CTAB) solution in 0.7 M NaCl were added and mixed. The suspension was incubated for 10 min at 65 °C and kept on ice for 15 min. An equal volume of chloroform: isoamyl alcohol (24:1) was added, followed by incubation on ice for 5 min and centrifugation at 7200 rpm for 20 min. The aqueous phase was transferred to a new tube, isopropanol (1:0.6) was added and DNA was precipitated at −20 °C for 16 h. DNA was collected by centrifugation at 7200 rpm for 10 min, washed with 500 μL of 70% ethanol, air-dried at room temperature for approximately 3 h and finally dissolved in 50 μL of TE buffer. The genomic DNA was stored at −20 °C and used for molecular identification and bacterial typing protocols.

2.4.2. PCR for Identification of Staphylococcal Isolates

Sequencing was carried out as described by Tamura et al. [11]. The purified DNA samples were sequenced with an Automated DNA sequencing Analyzer (ABI 3730X) using 27F and 1525R primers. All DNA sequences were subjected to the method of Altschul et al. [12] for comparison with the Basic Local Alignment Search Tool (BLAST) program alignment tool from GenBank at the National Center for Biotechnology Information.

2.4.4. Specific PCR for the Identification of Methicillin-Resistant Staphylococcus aureus

2.5. Determination of the Antibiotic Resistance Profiles of Staphylococcal Isolates

The staphylococcal isolates that were positively identified using the culture-based methods were subjected to antibiogram characterization. All the bacterial isolates were tested for resistance or sensitivity to different antibiotics using the standard disc diffusion method (Kirby Bauer test) [15]. For the disc diffusion assay, bacteria were grown between 18 and 24 h on Mueller-Hinton agar, harvested and then suspended in 0.85% sterile physiological saline solution adjusted to a 0.5 McFarland turbidity standard, corresponding to 108 cfu·mL−1. The inoculum was streaked onto plates of Mueller-Hinton agar using a sterile cotton swab and impregnated with appropriate antibiotics (Supplemental Material Table S1). The results were recorded after 24 h of incubation at 37 °C. Commercially available antibiotics discs, obtained from Mast Diagnostics, Merseyside, United Kingdom, were used to determine the resistance patterns of the isolates against 11 different antibiotics (1 dose/disc), grouped into 7 different classes of antibiotics. The diameter of the zone of inhibition around each disc was measured and interpreted as Resistant (R), Intermediate resistant (I) or Sensitive (S) in accordance with the recommended standard established by the Clinical Laboratory Standards Institute [16].

3.1. Specific PCR for the Identification of Staphylococcal Isolates

Among the total of 78 and 75 isolated presumptive staphylococcal isolates from nasal and raw milk samples, respectively-identified by cultural, morphological and biochemical characteristics-50 methicillin-resistant staphylococcal isolates each from the nasal cavity and the raw milk (100) were further confirmed using the 16S rRNA primer employing PCR assay which was more sensitive for confirmation of the isolates. The PCR products of the 16S rRNA for the confirmation of the 100 isolates from the nasal and raw milk samples and the partial sequence of the Staphylococcus species are shown in Supplemental Material Tables S2 and S3.

3.5. Detection of Resistance and Virulence Genes in Staphylococcal Isolates

Detection of resistance- and virulence-determinant genes from nasal cavity and raw milk samples revealed that all isolates harboured the mecA gene, while 19/50 (38%) and 11/50 (22%) of the isolates from nasal and milk samples harboured thePanton-Valentine Leucocidinis (PVL) gene and possessed the virulence determinant (Figure 1). Of the Staphylococcus spp., all S. aureus amplified the PVL gene while other Staphylococcus spp. were negative for the PVL gene (Figure 2).

This is the first report of mecA and PVL genes signatures that have been detected in food-producing animals in rural community Edo State, Nigeria. Furthermore, our study also demonstrated higher individual and multiple antibiotic resistance of staphylococcal strains in the rural community. These evidences highlights that the virulence potential, antibiotic resistance and the epidemiologic importance of staphylococcal strains must be further investigated. The drug resistance spectrum study provides a scientific basis for guiding the rational clinical use of antibiotics and for preventing and controlling the spread of drug-resistant bacteria. 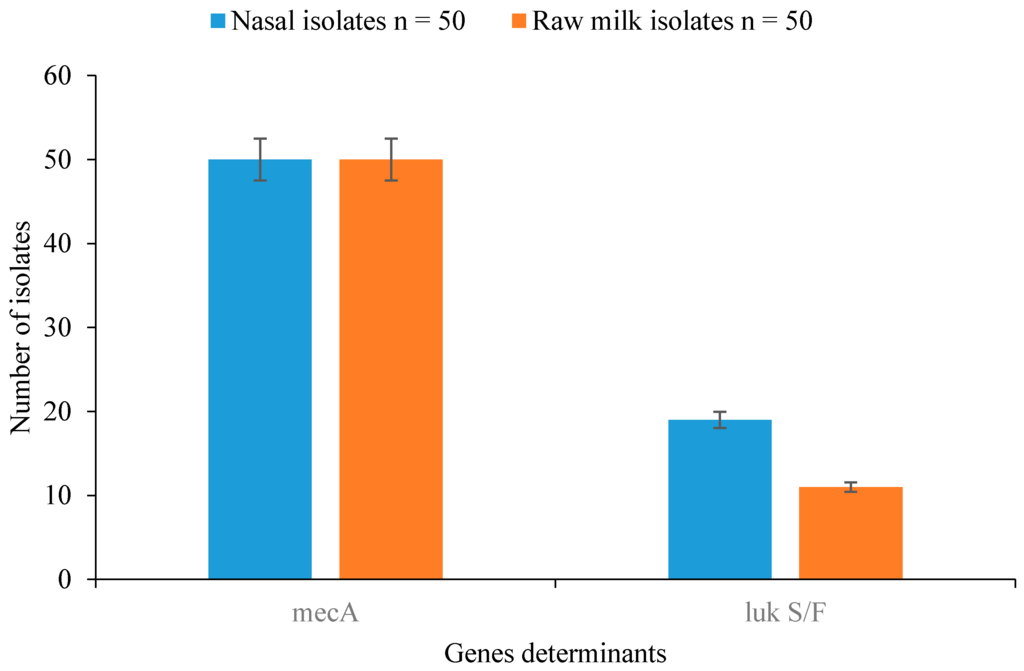 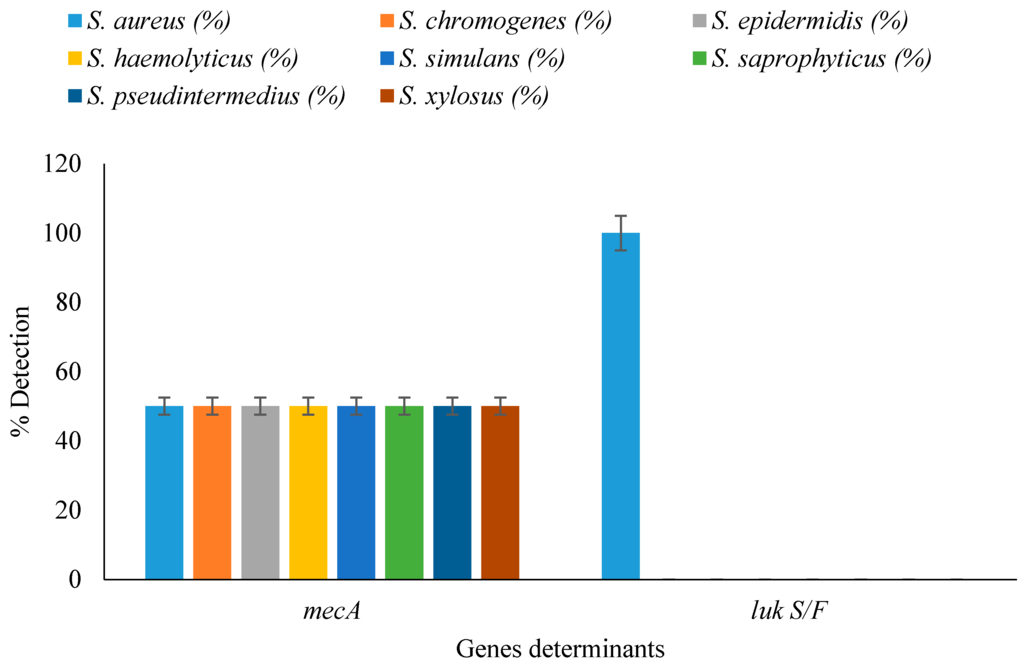 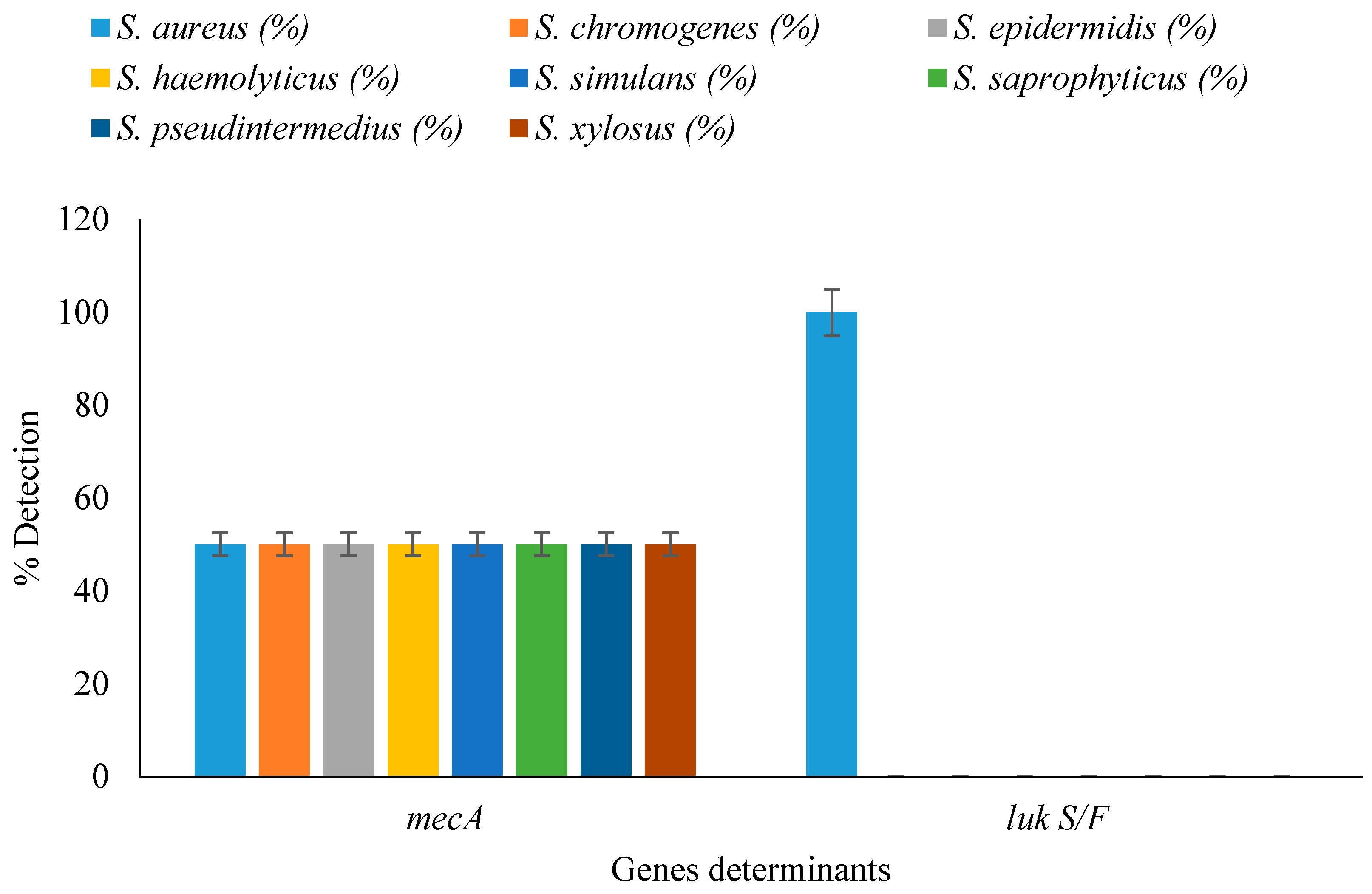