Landslides are the movement of rock, soil, and debris downslope under the influence of gravity [1] and depend on various factors including local geology, topography, climate, and land use/land cover type [2]. Prolonged rainfall and earthquakes are the primary triggers of landslides. Road construction on the slopes, hill cutting, and deforestation are the major anthropogenic activities that create a conducive condition for landslides [3].
Landslide susceptibility mapping is essential to mitigate landslide disasters, and a landslide inventory is the first step toward susceptibility assessment [1]. Since landslides generally occur in existing slide areas, it is vital to know the locations of previously occurred landslides, the size of the landslides, and their-related geomorphological factors [4]. A landslide inventory is a dataset of various information associated with landslides including the absolute and relative location, date, type, size, distribution, casualties, and triggers of landslides [1]. Several methods have been used for landslide inventory mapping including field mapping and visual interpretation of aerial and satellite images [5]. The first step to creating a landslide inventory is to map the exact location of landslides and then construct a dataset of landslides [6]. A good landslide inventory is shareable with the broader scientific community and stakeholders [1].
In Bangladesh, landslides occur mainly in the Chittagong Hilly Areas (CHA) (Figure 1). More than 350 people have died as a result of landslides in CHA in the last three decades [7]. Landslide susceptibility mapping in some parts of this area has already been undertaken [8,9,10]. In these works, researchers have generated landslide inventories using field mapping, visual interpretation, and automatic recognition of landslides from satellite images [10,11]. Sifa et al. [11] and Comprehensive Disaster Management Plan (CDMP) Phase_II [12] have published landslide inventories in three cities in this area: Cox’s Bazar, the Teknaf municipalities, and the Chittagong Metropolitan Area (CMA). Our recent work [5] mapped the landslides of the whole region. This inventory can be used for landslide susceptibility mapping of the entire area, which is very important for land use planning and policymaking. It is of importance to publish and make the data available so that the broader scientific community and policymakers can utilize this dataset for scientific purposes as well as decision making.

This article describes the landslide inventory dataset of the CHA in Bangladesh (Figure 1). The archived landslides in the inventory took place from January 2001 to March 2017.

Design of the Dataset

There is no standard method to create a landslide inventory dataset. Landslide inventory preparation aims to gather as much data as possible. A dataset includes various attributes, but some attributes may not be available for all landslides [14]. Most landslides are compiled from different sources for different purposes. We adopted three methods in our study: the visual interpretation of Google Earth images, a literature search, and field mapping where each method has advantages and disadvantages. For example, we could detect the landslide location, type, dimension, and date in Google Earth mapping, while for the literature search, we could only obtain data that were recorded in the literature. In contrast, most attributes related to landslide inventories can be gathered in field mapping. The combination of these three methods can help to generate a landslide inventory of events that have occurred recently, in the past, and in inaccessible and remote areas.
In Google Earth, we adopted four criteria to detect landslides: change of vegetation in historical images; the slope and elevation of the area; morphological changes in the images; and the presence of debris [15]. We considered the change in vegetation as the first indicator of landslides in historical images of Google Earth. Landslides remove vegetation, and this can be detected in pre-event and post-event Google Earth images. We checked the slope and elevation of the area in Google Earth using the Add Path tool. Next, we checked the morphological changes and presence of debris. The removal of vegetation can also occur in plain lands, but landslides cannot, which is why we included the slope and elevation in the criteria of detection. When all four criteria were met for a suspected area, we considered it to be a landslide. As above-mentioned, we had previously mapped the landslides from January 2001 to March 2017 and recorded the location, date, type, and dimensions of the landslide. The details of the landslide mapping in Google Earth are given in [5]. We searched the existing literature and newspaper reports before the field mapping. CDMP-II (2012) [12] and Rahman et al. (2016) [16] provided the landslide locations, date, type, causalities, and triggers of landslides for the Chittagong Metropolitan Area (CMP), Cox’s Bazar, and Teknaf municipalities. CDMP-II (2012) [12] did not provide the size of landslides, while Rahman et al. (2016) [16] provided the size of the landslides. Newspaper reports (1980–2017), records of the Disaster Management Department of the People’s Republic of Bangladesh, and the Roads and Highways Department provided the landslide data of landslides that caused casualties and damage to roads. Based on these reports, we selected Rangamati, Bandarban, Khagrachari, and part of the Chittagong district for field mapping. We adopted participatory field mapping with the help of four field investigators to record the landslide locations and various attributes of landslides (Table 1) including causalities, damages, and economic losses [5,17]. From the literature search, we found the location of landslides, but we did not know the exact locations. Participatory field mapping helped us in this regard since local people knew the exact location of the landslides. The trigger of landslides and financial losses were detected by interviewing local people, government officials, and local political leaders. The damage intensities were identified based on the qualitative judgment of the field investigators (classified into three categories: high, medium, and low). We used measuring tapes and Global Positioning System (GPS) to measure the area of each landslide. Four well-trained field investigators were hired to collect the type, distribution, state, and water content of landslides through visual investigation using classification schemes outlined in [14,15].
The final dataset was the compilation of the data gathered from field mapping, Google Earth mapping, and the literature search. We also combined the same landslide locations mapped by Google Earth and field mapping.

Y.W.R. and Y.L. conceived of the idea of this paper. Y.W.R. carried out the field work and Y.L. supervised the whole project. Y.W.R. wrote the manuscript with the support from Y.L. All authors have read and agreed to the published version of the manuscript.

This research was funded by the McClure Scholarship Program of University of Tennessee, Knoxville, USA. 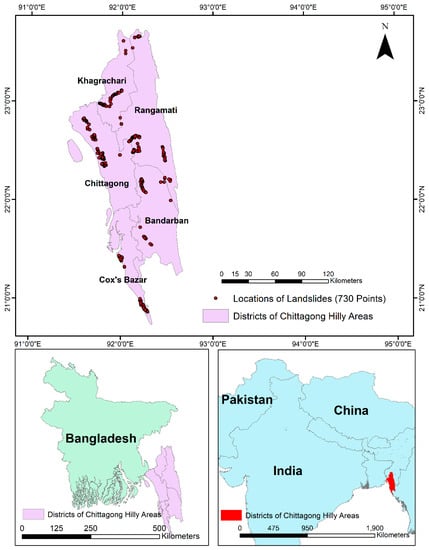 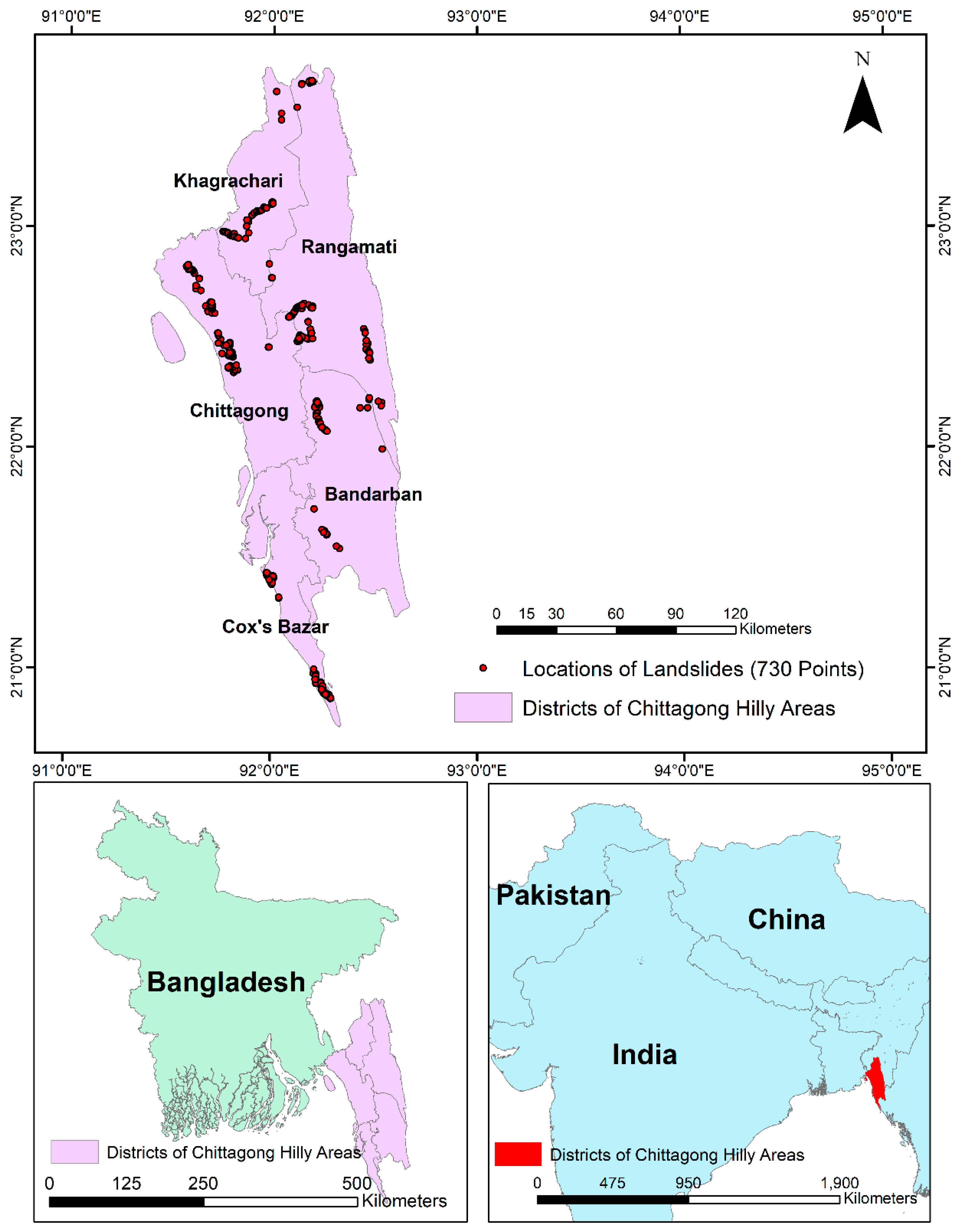 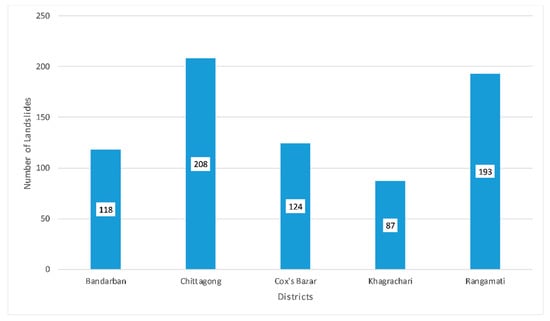 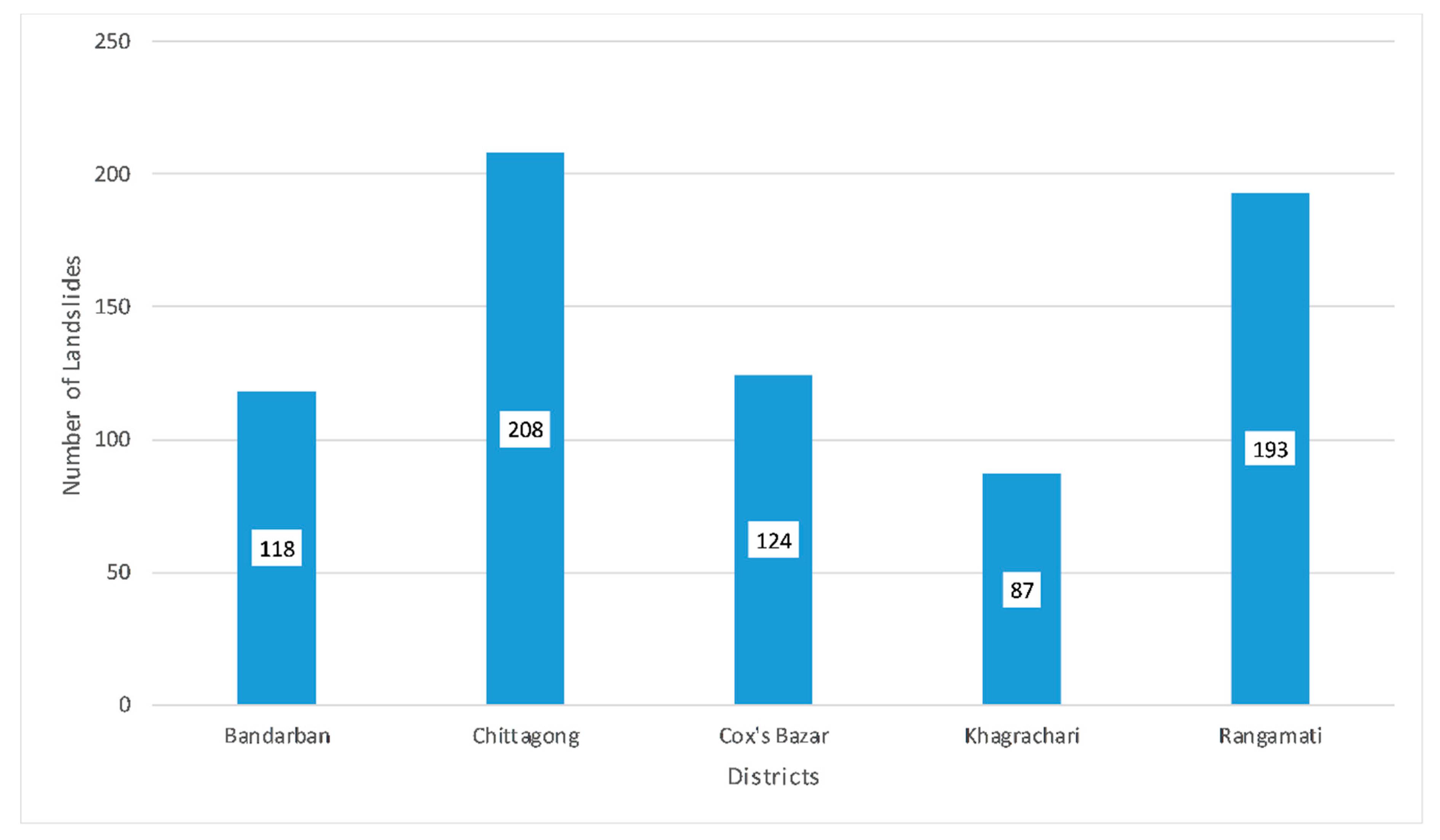 Table 2. Area of landslides in the CHA, Bangladesh.
Table 2. Area of landslides in the CHA, Bangladesh.
© 2019 by the authors. Licensee MDPI, Basel, Switzerland. This article is an open access article distributed under the terms and conditions of the Creative Commons Attribution (CC BY) license (http://creativecommons.org/licenses/by/4.0/).
We use cookies on our website to ensure you get the best experience. Read more about our cookies here.
Accept
We have just recently launched a new version of our website. Help us to further improve by taking part in this short 5 minute survey here. here.
Never show this again