Traditionally, representing research fronts [2] and denoting a community of scientific directions and sources, information spaces are identified on the basis of such explicit criteria as citation, co-citation, prospective links, keywords, etc.
One of the main approaches to the formation of common information spaces is the analysis of document citation. According to the approach of co-citation [3,4], jointly cited documents reflect the main directions of modern research and create the “core” of a specialty or branch of science.
The similar analysis of relationships is found in the method of prospective connections. In [5], “closeness of documents” was evaluated as the number of sources that cite these documents simultaneously.
In [6,7] the authors defined such statistical methods of research fronts identification as the method of counting the publications number and the citation index method. In the formation of information spaces, the statistical method uses the number of publications, links and keywords, as well as the number of scientists, journals, discoveries, etc. The method for measuring the number of articles in scientific areas provides an opportunity to gain an idea about the relative level of development of individual branches of science in the formation of information spaces.
In [8,9,10], a hybrid measure of publications proximity was used to identify research fronts as well. According to these approaches, the measure was calculated on the basis of three components: proximity by thematic similarity of texts, with common citation and common authors.
Generally, the number of highly cited articles and the sum of citation frequencies show the size of the research front.
However, due to continuous information changes, the use of explicit criteria is not enough to adequately form the information spaces of scientific communities.
Solving this problem, it is necessary to increase the level of natural language processing by identifying fragments of texts or phrases that are close in meaning.
The most well developed methods for determining the semantic similarity of short text fragments are the following: the method for determining synonymous collocations based on mutual information features [11]; the method for identifying rephrases using the similarity of fragments of phrases [12]; the method for determining context similarity based on the analysis of parallel corpora [13,14]. Similar studies on semantic proximity are monolingual sentence alignment algorithms [15,16]. In [17,18], the authors applied this method to study unsimplified and simplified texts in the English and Spanish languages.
All the listed approaches work either on texts of rather narrow subject areas or with statistical approaches that reflect a rather low precision of similar text fragments extraction.

Developing an information technology for identifying the semantic proximity of text fragments in Wikipedia articles of related categories to define a single information space or common fronts of scientific research, we propose using logical equations for similar collocations extraction. These equations are based on grammatical and semantic characteristics of collocation words.
The proposed technology for automatic identification of the information space of semantically connected Wikipedia data (Figure 3) includes:

In our approach, we use Wikipedia articles from different Wikiprojects [21,22,23,24] created by the community of these projects. Our dataset includes more than half a million (502,274) articles from four Wikipedia projects related to two portals (Table 2). The dataset is distributed under the CC-BY-SA license.

Wikipedia articles cover various subject areas represented in Wikipedia projects. We have proved the hypotheses that a lot of synonymous collocations from texts, especially, related to similar topics can form common information spaces in Wikipedia communities.
In our experiments, we use precision to assess the reliability of our approach for three types of collocations. To obtain the number of correctly extracted similar collocations, we use a sample of 1000 pairs of extracted text fragments randomly identified as synonymous collocations and calculate a ratio of the number of pairs of similar collocations correctly identified according to an expert opinion to the number of our representative sample.
The value of the average precision of our approach for substantive collocations is 0.781, for attributive—0.644, and for verbal—0.627. The reason of relatively low results might be due to mistakes of the POS tagging and UD-parser. As our model identifies a set of possible grammatical and semantic characteristics of collocation words, it considerably depends on the result of parsing. Consequently, these mistakes are not determined by the chosen parser but based on morphological or/and syntactic ambiguity that is unavoidable and affects the precision of the final result.

This research provides the developed technology for analyzing the semantic similarity of Wikipedia articles of various topics and thereby identifying common Wikipedia communities. Based on the use of algebra of finite predicates, the developed model allows defining semantically similar text fragments in Wikipedia articles from different projects. The experimental results confirm the reliability of the proposed model.
The proposed technology is beneficial for retrieving more relevant documents on the Internet, in particular articles from a common information space in Wikipedia, as well simplifying the process of search engine optimization (seo) of content. Our model is one of the linguistic tool together with other approaches can be helpful in the formation of electronic catalogues of semantically connected texts in scientometric, library, and abstract systems.
Our further work will be directed at the integration of our technology in the systems of automatic generation of Wikipedia communities. We will focus on extracting paraphrases from bilingual Wikipedia articles. Our future work will also extend to studying other types of collocations such as Verb–Adverb, Adverb–Adjective, etc. that broaden the scope of the research of information spaces and can lead to more precise results.

S.P. and N.K. developed the technology and performed the data analysis; W.L., O.M. and K.M. performed the experiment. All authors contributed to the writing of the paper.

This research is supported by the Committee of Science of the Ministry of Education and Science of the Republic of Kazakhstan.This research was funded by grant number AP05131073—Methods, models of retrieval and analyses of criminal contained information in semi-structured and unstructured textual arrays. 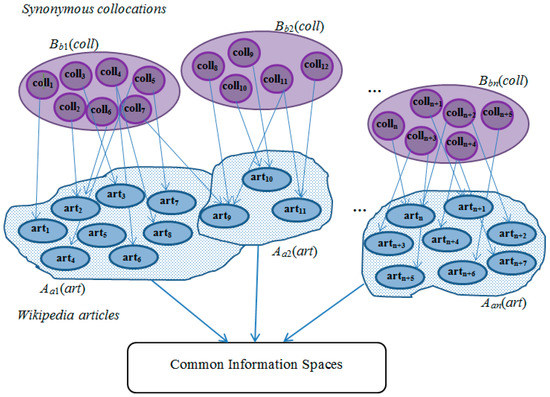 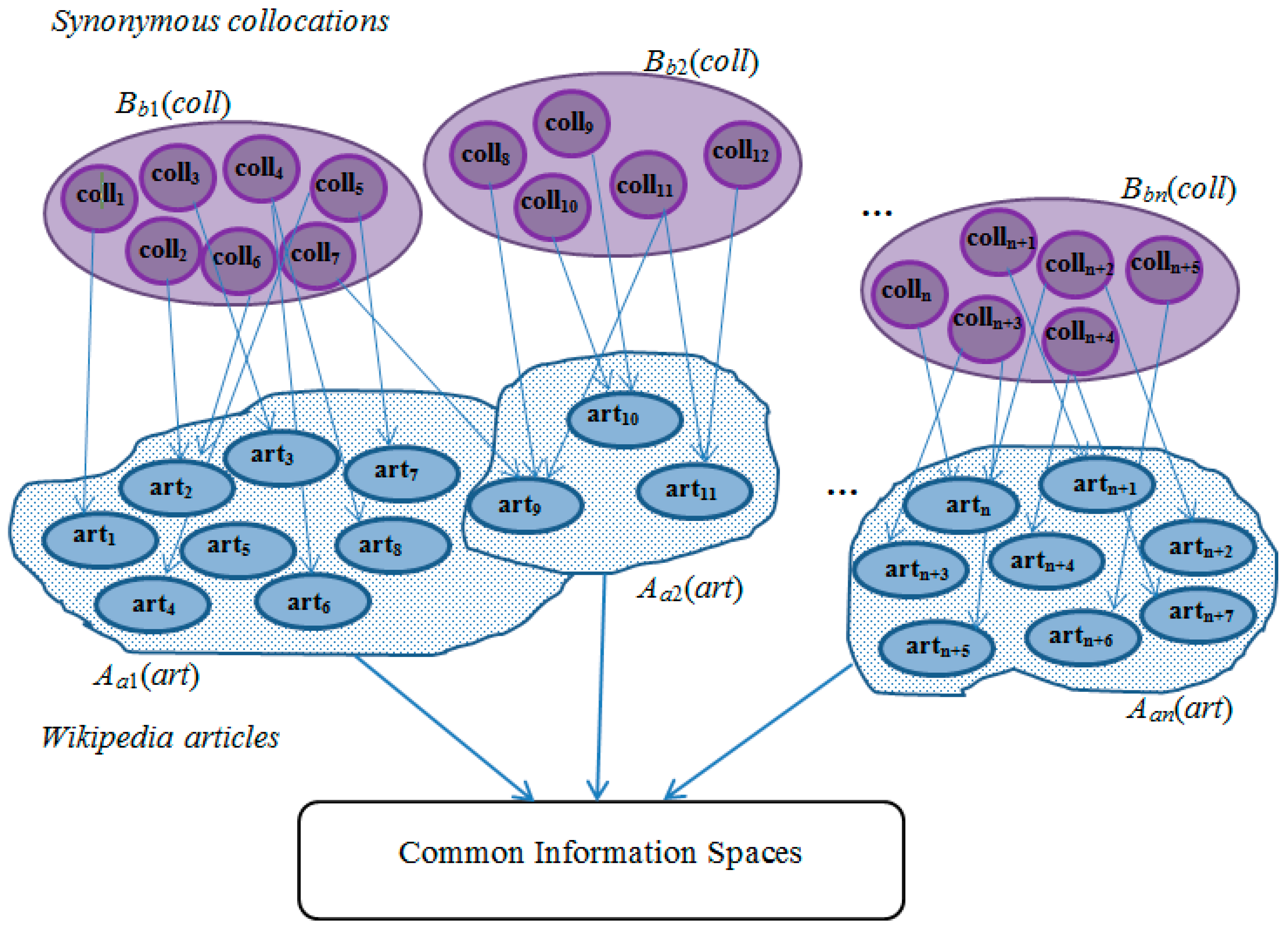