This paper intends to present a large-scale dataset for Arabic morphology from a cognitive point of view considering the uniqueness of the root–pattern phenomenon. The center of attention is focused on studying this singularity in terms of estimating associative relationships between roots as a higher level of abstraction for words meaning, and all their potential occurrences with multiple morpho-phonetic patterns. A major advantage of this approach resides in providing a novel balanced large-scale language resource, which can be viewed as an instantiated global root–pattern network consisting of roots, patterns, stems, and particles, estimated statistically for studying the morpho-phonetic level of cognition of Arabic. In this context, this paper asserts that balanced root-distribution is an additional significant key criterion for evaluating topic coverage in an Arabic corpus. Furthermore, some additional novel probabilistic morpho-phonetic measures and their distribution have been estimated in the form of root and pattern entropies besides bi-directional conditional probabilities of bi-grams of stems, roots, and particles. Around 29.2 million webpages of ClueWeb were extracted, filtered from non-Arabic texts, and converted into a large textual dataset containing around 11.5 billion word forms and 9.3 million associative relationships. As this dataset is predominantly considering the root–pattern phenomenon in Semitic languages, the acquired data might be significant support for researchers interested in studying phenomena of Arabic such as visual word cognition, morpho-phonetic perception, morphological analysis, and cognitively motivated query expansion, spell-checking, and information retrieval. Furthermore, based on data distribution and frequencies, constructing balanced corpora will be easier. View Full-Text
Keywords: cognitive linguistics; Arabic morphology; corpus linguistics; associative root–pattern network; bi-gram analysis cognitive linguistics; Arabic morphology; corpus linguistics; associative root–pattern network; bi-gram analysis
►▼ Show Figures 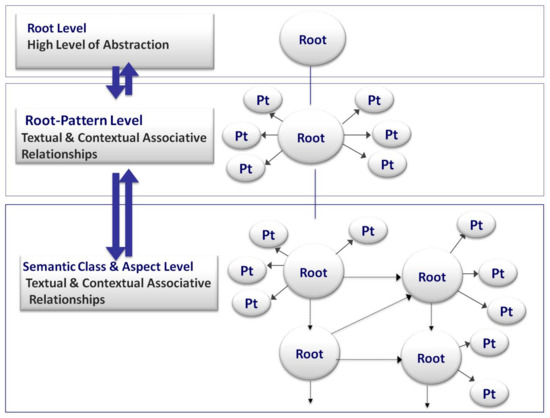