An Update on the Health Benefits of Green Tea

Elemental fingerprints could provide an analytical approach to product differentiation and authentication, and have been used in the past for various distilled spirits, including brandy, gin, bourbon and tequila. However, a comparison of elemental differences between different whisk(e)y types, such as Bourbon and Scotch, is still missing. In this study we compare the elemental fingerprints of 68 commercial whiskies for differentiation by type (Bourbon, Tennessee, Scotch, Irish, Japanese) and region. Concentrations from sub-μg/L to mid-mg/L of 53 different elements were determined with inductively-coupled plasma—mass spectrometry (ICP-MS) and microwave plasma—atomic emission spectroscopy (MP-AES), and used in subsequent statistical analyses. Significant differences in several elements were found for type, and allowed a classification according to whisk(e)y type. Elemental differences were also found for different production areas within Scotland, thus, providing further evidence that Scotch whiskies could be differentiated by elemental analysis. Major sources of elemental differences seem to be processing equipment (Cu, Fe, Ni, Cd, Sn, Mo, V) and raw materials, such as water (Ca, Mg, Fe, Mn, Sr). View Full-Text
Keywords: whiskey; whisky; type; Scotch; Bourbon; elemental profile; trace metals whiskey; whisky; type; Scotch; Bourbon; elemental profile; trace metals
►▼ Show Figures 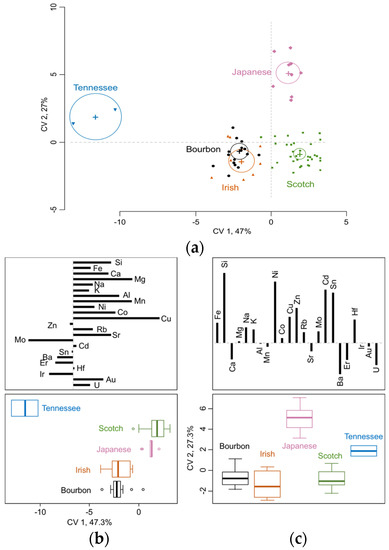